Share All sharing options for: Men's Soccer Shuts Out Duke, Onto ACC Semifinals

The men's soccer team needed just one shot on goal to down the fourth ranked Blue Devils in the quarterfinals of the 2010 ACC Men's Soccer Championship at WakeMed Soccer Park in Cary, NC.

BC junior Amit Aburmad scored in the 17th minute off a cross from Edwin Worley.

Fifth seeded BC is onto the semifinals, where they'll face the top-ranked Tar Heels. North Carolina was a 4-0 winner over the eighth seeded N.C. State Wolfpack. On the other side of the bracket, no. 6 Virginia upset no. 3 Wake Forest 1-0, and the second-seeded Maryland Terrapins held off Clemson 2-1.

With the strange way BC defeated Duke, anyone else feeling like this could be a special tournament for the Eagles?

The Eagles play North Carolina on Friday night at 8 PM. The winner plays the winner of the first semifinal -- Maryland vs. Virginia -- in the Championship match on Sunday. BC has played each of the semifinal teams once this season, going 0-0-3 against the three remaining programs with identical 1-1 scores. 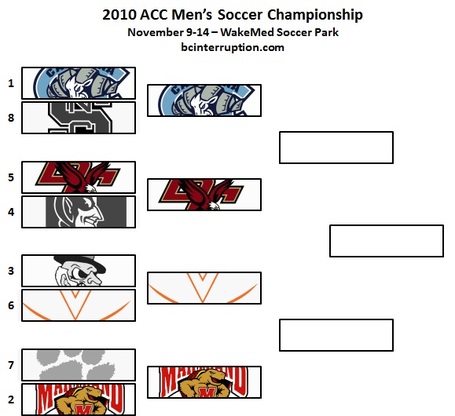