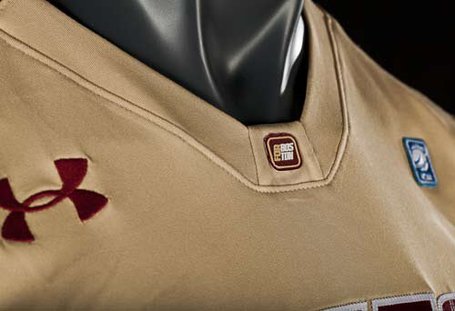 When BC first announced the move to Under Armour, my first thought was "good for football, bad for basketball." I hadn't seen a good basketball jersey on any Under Armour-outfitted basketball team and was not impressed with their line of basketball sneakers (which currently consists of one). Now the time has finally come where we will know what our new look team under Coach Donahue will be donning.

Now I have yet to get my hands on an actual jersey, so this review is all based on Dime Magazine's interview with Under Armour. We all know jerseys always look better when you are racking up W's. 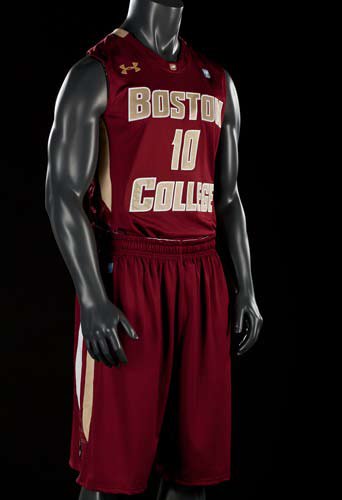 This is in line with the new jersey that basketball mogul Nike has produced in the recent past. A fairly cut trim, similar to base layers BC used to wear under our old jerseys. Might leave some our heavier guys feeling self conscious, but nothing like HD TV and tight jerseys to get our guys into shape. I'm not a huge fan of the tighter fitting jerseys, but it seems that for performance, this is the way to go. 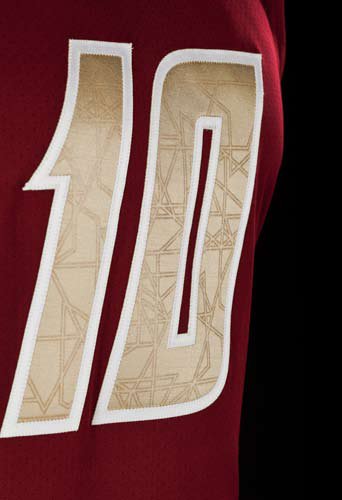 Lettering and Numbers: B+

Under Armour couldn't get away from the italics, but put a nice spin on the numbers by adding some detail within. What Under Armour tried to do was tie in our school history with the jersey. As a fairly conservative Jesuit institution, the best they could do was a stained glass effect within the numbers. I like the idea, and it looks fine, but it's kind of disappointing that's the best they could do. Does anyone else think this looks similar to the numbers on the Virginia Tech football Pro-Combat jerseys? 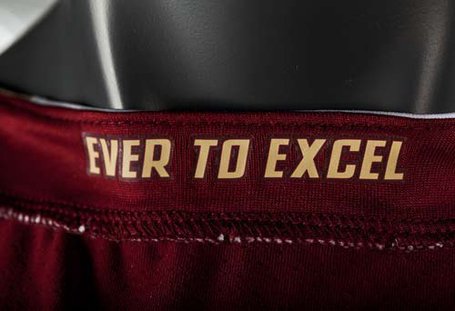 Disclaimer: I'm a sucker for slogans and little details. The "Ever to Excel" on the inside collar, while not visible, still is pretty cool. I appreciated that on the US World Cup Jerseys and appreciate it here. On the neck line, there's a "For Boston" emblem, which is a nice little touch, but don't know if that should be replaced with a BC logo. As the jerseys are now, there are no BC logos on the jersey. Also the design of the For Boston emblem need to be improved. Maybe theheights has some ideas? 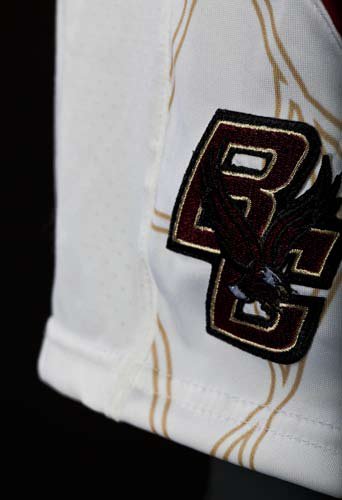 The cut of the shorts looks great, and is an improvement over years past. The details down are a great way to incorporate our colors and break them up, but i think Under Armour overused the stained glass effect. On the white shorts, it looks like lightning, and throws off the whole look. I also like that the Under Armour logo doesn't seem to be on our shorts, but with that we also seem to be missing the writing on the behind. (again our info is limited to the pics provided by Dime Magazine).

Overall, this year's jersey is quite an improvement over anything Reebok ever provided BC. Hats off to the Under Armour design team, and hopefully this will give us the added confidence to squeak out a few more wins this season.

More from BC Interruption