Headlines: BC Drops 3-2 Decision to BU at Fenway Park

Share All sharing options for: Headlines: BC Drops 3-2 Decision to BU at Fenway Park 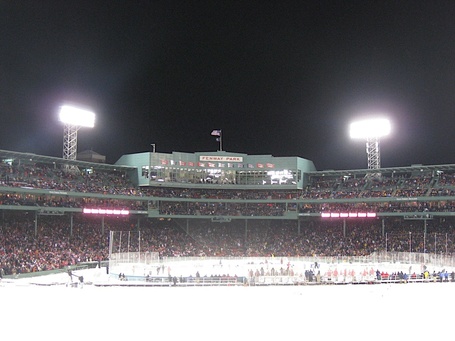 At the end of the day, you have to tell yourself that this was just another Hockey East game. Simply one of BC's 27 Hockey East tilts this year. But the reality was that you couldn't help leaving frigid Fenway Park on Friday night feeling like our crosstown rivals had punched you squarely in the gut. The same feeling that comes from losing to Boston University in the Beanpot final in years when you know without a doubt that BC is the more talented team.

There wasn't a Hockey East conference title or a pot of baked beans on the line on Friday night. But there were intercity bragging rights in a unique hockey event that might not come around again anytime soon. And on one of Hockey East's biggest stages, the Eagles again fell a goal short.

The same problems that have plagued this team through their three games in 2010 - a young, inexperienced blueline and the lack of a go-to goal scorer - reared their ugly head on Friday night. Each of BU's three goals were the result of a Terrier camping out near the crease and either knocking in the loose rebound or redirecting the puck past Muse. The Terriers' game-winning goal from Megan was the most egregious, where all 3 Terrier offensive players were camped out to Muse's left and left uncontested to knock in the rebound.

As for lack of a go-to scorer, try to find a Eagle in the top 40 in the nation for points per game. You can't. Brian Gibbons comes the closest at 43rd (1.11 points per game). It's the same story for goals per game (Cam Atkinson 28th), assists per game (Gibbons 50th), power play goals (Ben Smith 17th), game-winning goals (Ben Smith 30th) and on and on for just about every offensive statistical category you can think of. The Eagles aren't getting nearly the production from their forwards as they have over the last few seasons. The result? An Eagles three-game losing streak - BC's longest losing streak of the season. The three-game slide is the Eagles' longest in almost a year to the day. Last season, BC lost to Vermont, Lowell and BU (Jan. 10, 16 and 17), digging themselves a hole in the Hockey East standings that they ultimately couldn't get out of.

There were positives to take away from the loss. Brian Gibbons and Cam Atkinson continue to provide a spark on offense and are the closest thing to a #1 scoring threat the Eagles have at the moment. Cam Atkinson's short-handed goal was only the second short-handed goal for the Eagles this year, and both occurred in back-to-back games. Scoring while a man down has long been a strength of BC's championship calibre teams. Hopefully there is more short-handed scoring to come down the stretch. Finally, all things considered, Muse didn't have a terrible game, stopping 28 shots in the loss.

As for attending the Frozen Fenway event as a fan, I personally thought it was an awesome experience. I'm really glad I made the weekend trip. The novelty of being inside a snow-covered Fenway Park in early January didn't resonate with me during the game. It was only after thinking back on the experience did I realize how cool it is to be sitting in one of baseball's iconic stadiums in the dead of winter. Not many sports fans get to have that experience.

Fenway's proximity to the Boston University campus created a great atmosphere in and around Fenway Park before the game. All the local bars were hopping. The weather contributed to the great atmosphere, with "snow globe"-like snow falling on Fenway Park for the first 30 minutes of the game. Admittedly we couldn't see much of the action from our centerfield seats. If you don't closely follow the sport of hockey, you could have easily got lost watching the game from centerfield. However, some fans followed along on the Jumbotron and everyone seemed to have a great time.

Leading up to the game, there was reportedly some hard feelings among the Hockey East schools not selected to play in this unique outdoor hockey game. While I can appreciate other programs feeling hurt they weren't selected for this event, BC vs. BU was absolutely the right choice. If this event doesn't become a permanent fixture on the annual Hockey East schedule and the league only had one shot playing hockey at Fenway, the league had an obligation to do it right. Based on BU's proximity to Fenway Park and the fact that this game sold out in less than a week, I'd say Joe Bertagna made the right decision.

After going into the winter break winners of 5 straight and unbeaten in their last 7, the Eagles have quickly lost three games in the new year. With this loss, BC falls to 7-4-2 (16 points) in Hockey East and falls to third place behind New Hampshire (21) and Maine (17). The next two weekends will go a long way towards deciding whether BC is truly going to contend this year for another Hockey East title. It starts tomorrow night when BC returns home for the first time in over a month to host a Providence team that it has no business losing to. If the Eagles can take care of business over the next two weekends against steadily increasing competition (including Lowell, Maine and another shot at home against Boston University), they will be well positioned to start the new decade off as they did most of last decade - making another deep run in the NCAAs. If, however, the Eagles continue their slide by dropping, say, 3 of their next 5 games leading up to the Beanpot, it might be a repeat of the 2008-2009 season for York and this young Eagles team.

Quickly ... check out BU Today for an awesome 360 degree view of the Fenway Park crowd ... also stop by The Boston Hockey Blog to view their Frozen Fenway slideshow ... I answered some questions for the Yahoo! NHL blog Puck Daddy before the game (too bad my prediction was a bit off) ... this Red Sox fan loved the Boston U. commemorative uniforms, while I hope we never see those Eagle uniforms again ... Inside Hockey's Tim Rosenthal reminds us that Frozen Fenway won't be the last collegiate hockey played outdoors in 2010 ... finally, PC's game notes for tomorrow's game with the Eagles ...