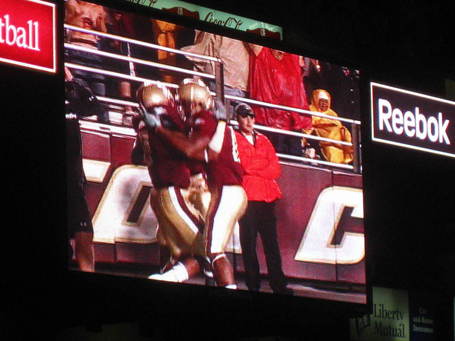 Brian: Outstanding victory for the Eagles. The general theme of the post-game coverage was that Florida State lost this game and the wheels are falling off the Bobby Bowden bandwagon down in Tallahassee. However, this is a disservice to how BC played on Saturday, particularly the play of Dave Shinskie, Montel Harris and the BC defense. So first things first Jeff, did BC win this game or did FSU lose this game?

Jeff: Two weeks in a row BC played great football for a while and built a large lead only to see that lead disappear and the opposing team have chances to win late in the game. This is a seriously problem that BC will not get away with all season. Watching the game the second time, I can't say Florida State lost this game since the most glaring mistakes were the dropped interceptions and FSU never had a lead. FSU's missed field goal, given the weather, is not a huge mistake on their part and at that point there was still plenty of time for them to score again.

Brian: Like you said, BC gave up a double digit lead in the second half again. What is up with this, and what can be done to correct it?

Jeff: Against Wake Forest it was glaringly a play calling and coaching problem. On Saturday, it looked more like FSU finally got some things to click and they were, as they needed to be, in attack mode all during the second half. I am worried about the way both games played out but I am actually less worried this week than I was a week ago. I think the coaching was much better on Saturday and FSU is just simply a team that is good enough to score on our defense. Especially in the second half  when McLaughlin has to sit out since he's not back to true playing form yet and Albright went down injured. The offense still needs to learn that no lead is big enough and keep attacking but unlike against Wake Forest, on Saturday, we were never on the verge of the opposing team taking the lead and BC not having enough time to do anything about it.

Brian: The Eagles had to be amped about this game given that ESPN’s College GameDay was on campus, the great news Mark Herzlich received this week and the nationally televised game. Was this a case of right opponent, right time for the Eagles, or can this team continue to make noise in the ACC Atlantic the rest of the season?

Jeff: The Eagles can make plenty of noise the rest of the season. Left on their schedule, the Eagles play the best team in the ACC (Virginia Tech) this weekend and then have the 8th (North Carolina), 9th (NC State), 10th (Virginia), and 11th (Maryland) best teams in the conference left according to the Sagarin ratings. The Eagles will be significant favorites in those four games and a 4-1 record the rest of the season would just require one more Clemson loss for the Eagles to be headed to Tampa for the third straight season. Do you like the Eagles chances of making it back to Tampa?

Brian: The Eagles at 2-1 in conference play and have to be considered the favorites to win the Atlantic Division this week. Thanks in part to Clemson’s field goal kicker who missed two field goals on the road at Maryland to drop their second ACC game. With the Eagles wins over both Florida State and Wake Forest, and NC State coming to the Heights in two weeks, BC is in good shape to win the Atlantic Division for the third consecutive season.

The current ACC Atlantic Division standings are a mirror of the preseason ACC Atlantic predictions with Maryland on top of the division at 1-0. As you said, you have to like the Eagles chances given the fact that BC has the tiebreaker now over both Wake Forest and Florida State. NC State and North Carolina (the wheels seem to be coming off the UNC offensive wagon, too, with their 16-3 setback at home vs. Virginia) both come to the Heights.

Here is the rest of the sched for the ACC Atlantic Division contenders (Sagarin ratings in parenthesis):

Maryland has an easy next couple of games but an absolutely brutal November with games against NC State, Virginia Tech, Florida State and BC. Still, only at 1-0, their road to Tampa is much longer than the Eagles remaining road. Wake Forest and NC State are still very unproven in ACC play and both those programs are a bit of an unknown (high-powered offense, no defense). Clemson seems to have as easy a road to Tampa as the Eagles, but still have to play three Atlantic teams. At this point, I haven't seen anything from Florida State that would suggest that they are going to turn the corner and rattle off 6 ACC wins to win the Atlantic. The Seminoles will be closer to battling for bowl eligibility than for the Atlantic.

While the season is still early, and this Eagles team is very young, chances are good BC can again contend for the Atlantic Division crown. It is looking like a mark of 6-2 or 5-3 may very well win this thing again this year.