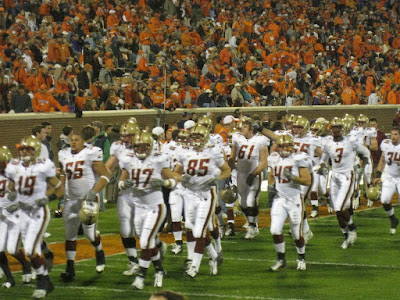 It's Clemson week! What better way to start talking Eagles vs. Tigers than with a game of oddsmakers.


Chances a BC running back goes over 100 yards rushing?

Jeff: Well why don't we just say chances that Montel Harris runs for over 100 yards since Haden doesn't even have 100 yards on the season yet? I'm going to say this is unlikely. I expect Clemson to play run first all game and put the game in the hands of whichever one of our rookie quarterbacks is under center in front of the large and loud Clemson crowd. As much as I like our backs, they were not impressive enough against Kent State for me to think that anyone will rush for over 100 yards against an ACC opponent until our passing game proves it needs to be given respect. 20%.

Brian: I am going to disagree with you here. Clemson had to be thinking run first last Thursday night too against Georgia Tech, and they let the Yellow Jackets rush for over 300 yards and over 100 yards through the air. The Jackets actually nearly had two backs go over the century mark. Now I realize that the Eagles don't run a triple option, run-heavy offense, but I think the Eagles have enough skill at running back (Ninja, Haden, Deuce) and quarterback (Tuggle) that this mark can be eclipsed in this game. The Eagles offensive line play should also be strengthened by the return of Nate Richman who will be replacing Emmett Cleary at left tackle. In reality, it might only take one back to bust through the line and get a long gain for an Eagles back to go over 100 yards on the day. I will go fairly high on this one and say 45%.


Chances BC keeps Jacoby Ford out of the end zone?

Brian: I'm going to go fairly low on this one. I think the Eagles will first and foremost scheme defensively to stop C.J. Spiller. As Eagles fans are painfully aware, Spiller basically lit up the Eagles defense and special teams last season en route to 242 all-purpose yards in the Tigers first win over BC in ACC play. With all eyes on Spiller, it wouldn't surprise me if Ford slips into the end zone either on offense or special teams. Through two games (albeit against inferior opponents), the pass defense and special teams have been better than expected for the Eagles so far and give me reason to go higher on this one. 25%.

Jeff: Jacoby Ford, more than C.J. Spiller in my opinion, is an over-hyped speedster. Certainly he deserves to be labeled ridiculously fast - because he is - but he is not a great wide receiver. Therefore his best chance of scoring a touchdown is really on special teams when he goes against a quality defense like Boston College's defense. I'll go as high as 82%.


Chances BC quarterbacks combine for 2 or more TD passes?

Jeff: 37%. Three (or more) touchdowns for the offense would be great Saturday. Odds are good that if we get to that mark, at least two of those touchdowns will be on the ground.

Brian: Considering the fact that BC has yet to throw 2 passing touchdowns in a game vs. Clemson since joining the ACC, the chances here aren't very likely. Even QB Matt Ryan couldn't seem to accomplish this feat. In 2006, a young Matt Ryan didn't throw for more than one touchdown against the Clemson defense in a 34-33 double OT victory. In 2007, Ryan again only threw one touchdown (it may have only been one TD, but it was a huge one!) in the Eagles 20-17 victory. You have to all the way back to 1983 to find a time when the Eagles QBs were able to throw for more than one touchdown against the Tigers. In that game, Doug Flutie was 20-36 for 223 yards and two touchdowns in a 31-16 come-from-behind Eagles victory. Given that both Shinskie and Tuggle are still very green under center, the chances of this happening are indeed very low. I'll agree with you in that a majority of the Eagles touchdowns on Saturday will come on the ground and now through the air. I'll go as low as 10%.


Chances Steve Aponavicius is still perfect on the year after the Clemson game?

Brian: In the span of two games against Clemson, Steve Aponavicius has gone from hero to goat in a little under a year. In 2007, Aponavicius went 2-for-2 on field goal tries of 30 and 40 yards in an Eagles 20-17 victory. Last year, however, Aponavicius missed both field goal attempts from 21 and 37 in last year's 27-21 loss to the Tigers. While Aponavicius has converted all three field goal attempts on the season - FGs of 24, 24 and 33 - the Eagles will have to rely on Aponavicius's leg to keep the Eagles in this game. Clemson's defense will probably be one of the best defenses we will face all season and field position will be at a premium on Saturday. As a result, I really hope the coaching staff doesn't keep Aponavicius off the field if the Eagles are in field goal range. Because I expect to see a lot of Aponavicius on Saturday, I will go fairly low on this one. 50%.

Jeff: I think the BC coaching staff has learned when and when not to use Aponavicius over the last few years while he has also developed a slightly stronger and more accurate leg. I like his chances to stay perfect in this game because the only time Spaziani is going to send him our for a field goal longer than 40 yards is in a situation at the end of either half or if we face fourth and really long. Last week, the announcers overpraised Aponavicius. But at the same time, he has looked like he might be pretty reliable for us this year from the correct distances. 85%.


Last one, chances BC wins this Saturday in Death Valley?

Jeff: I predicted a win for the Eagles before the season began and the Eagles have looked better than expected thus far. Clemson meanwhile played one inspired quarter of football against Georgia Tech where they could have hung with and beaten any team in the nation. Everyone is now saying that if Clemson plays the way they did in the second half of the Georgia Tech game, Boston College has no chance. The funny thing is though that there is no chance that Clemson or any team plays with that much heart and energy for a full 60 minutes. For a while most players on the team refused to be blocked by Georgia Tech players. The Eagles are more likely to match that intensity than Georgia Tech was with a large lead entering the second half on Thursday night. I'm sticking with my original prediction that BC will win, but I can't give them any better than 60%.

Brian: 60%?! You are giving the Eagles running backs only a 20% chance of going over 100 yards and Eagles QBs only a 37% chance of throwing for 2 or more touchdowns. Where are all these Eagle points going to come from? Your math doesn't seem to add up, sir. Don't get me wrong. I have no doubt that the Eagles can hang with the Tigers. However, with Clemson having plenty of offensive weapons, an offensive line that has improved from last year, and a strong defense ... not to mention the game being in one of the ACC's most hostile environments, I can't go any higher than 39% in this one. Overall, I like what I've seen from the Eagles and wouldn't be surprised if they pull off the upset. Here's to hoping the Eagles prove me wrong on Saturday.