Let the Games Begin! and the Big Finish

Share All sharing options for: Let the Games Begin! and the Big Finish 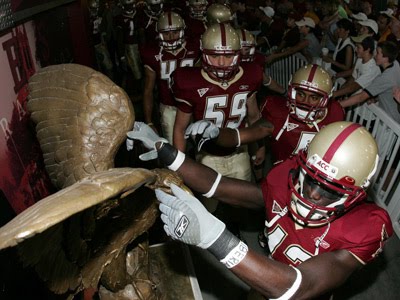 Brian: It has been 248 days since the Eagles last took the field. It has felt like 2,480. I, for one, am just glad college football is back. The Boston College Eagles begin their 2009 campaign against Northeastern starting at 2pm ET. Jeff, break down the game for me. What are you expecting this Saturday?

Jeff: Well, first let me say I am expecting a win and I am expecting an easy win too. Against a team like Northeastern I don't think we'll feel the effects of having a smaller front seven because they're still plenty big enough to dominate in this game.

On offense, I hope to see nearly 200 yards rushing which should be enough to win easily without the passing game clicking. Will it be a 45-0 type game? Possibly, but perhaps a 25 point differential is more realistic.

Brian: Spaziani has basically resigned himself to the position that he’ll play all three quarterbacks on Saturday and see in game action the hand he was dealt.

"As best we can determine, no one has separated themselves," Spaziani said. "They all have some redeeming qualities, or else they wouldn't be on our football team. We've got about as far as we can go with practice, trying to determine where we're going to make a decision with these guys. We're going to have to put them in a game. You really never know about a quarterback until you get in the game, even if you've picked one."


Do you like this philosophy? And which starting quarterback candidate do you expect to have the best performance tomorrow?

Jeff: I really, really wish that one of the quarterback candidates had elevated his game enough prior to this point to be deserving of the starting quarterback position. Unfortunately that has not happened though, so I must say that I love Spaziani's quotes and approach to the whole situation.

Most coaches at this point would be trying to boost player morale by saying they have two or three very talented players that have all been pushing each other and they're a better team because of the 2 or 3 candidates vying for the position as compared to just having one clear starter. Spaz knows that isn't the case (and so do we) so he is not sugar-coating anything. He is telling it like it is. I think the team and this quartet of QB candidates will be better in the long run because of his approach right now.

Brian: Yesterday, Blaudschun lamented the lack of buzz surrounding the Eagles opener vs. Northeastern and praised Gene for scheduling in a way that has allowed Boston College to maintain a high level of success over the past 10 years. He goes on to ask the question:

"Would you rather start 2-0 going into the game at Clemson against two ho-hum teams? Or would you rather deal with the deck that Miami’s Randy Shannon has, which has his team starting out against Florida State, Georgia Tech, Virginia Tech and then Oklahoma?"


Recognize that the question is somewhat flawed. Miami has limited control over the fact that they get three of the toughest ACC opponents to start the season. Not to mention you only have to go back to 2007 to find a case where the Eagles had to play three straight ACC opponents to start their season. Anyhow, which would you prefer? Would you rather see the Eagles get challenged straight out of the gate, or do you like these two "warm-up" games?

Jeff: The argument is flawed like you said because Miami can give the league office a preference as to when to play a game or two, the Canes didn't choose their entire September ACC schedule. For once though, especially after watching the mistake-filled games that were on TV last night, BC has it right. Playing a very winnable game is the way to start the season because there are going to be plenty of mistakes and you want to play the better opponents and conference opponents when you're playing at or closer to your highest level of play.

Jeff: The ACC blog On The B.Rink delves deeper into why BC never seems to get any respect. What do you think is the number 1 reason on his list?

Brian: The "small school, big city" excuse is probably the best reason on that list, but that only tells part of the story. I don't think geography is a reason though because Miami gets similarly disrespected and is frequently mentioned as a program the ACC should jettison. Winning, however, will cure all.


Brian: After we both had to sit through the ugliness that was South Carolina 7, NC State 3, are you considering revising your prediction that NC State will beat BC on October 17?

Jeff: Not at all. Remember Russell Wilson is a baseball player and played in a wooden bat league this summer. He and that Wolfpack team will improve.

Brian: Considering last year's I-AA game didn't even come close to that mark (32,628), I'll sadly go with the under. Although an inter-city team and the home opener will certainly help things out.


Brian: Joe Trapani is one of Rush the Court’s 2009-10 Impact Players from the Northeast. Did they pick the right Eagle?

Jeff: Well it was either him or Rakim Sanders. Maybe it should've been Sanders but I'm not going to say they're wrong.


Jeff: Penn State's 2010 game at Indiana is being moved from Bloomington to FedEx Field in Maryland. Moving conference games to neutral site locations – fair or foul?

Brian: Very foul. When you have to travel over 400 miles further than your opponent for one of your home games, something is seriously awry.


Brian: Last one, HD predicts the Eagles will win 28-7. Will the Eagles score more or less than 28 points?

Jeff: I think the Eagles score in the 30s but might give up more that seven points, especially if the offense makes multiple mistakes.

Brian: For the second straight season, Friday's Big Finishes will feature our pick 5s. Last season, Jeff finished the year at 42-33 while I finished at 39-36. As Jeff beat me by 3 games last season (even though he did everything in his power to cough up his lead in the final week of the season), he gets to select first.

Ground rules: The winner of the previous week will pick games first (think: honors in golf). We can't pick the same game unless we want to take the other side of the same line.

As always, you are more than welcome to play along by posting your picks in the comments section.

Enjoy all the college football on this Labor Day weekend! Go Eagles!