Headlines: What We Learned In Week 1

Share All sharing options for: Headlines: What We Learned In Week 1 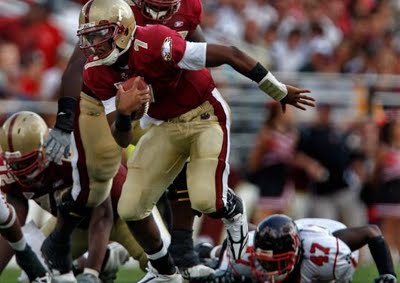 Brian: Yes, it may have only been Northeastern, but a win is a win. After what happened to Duke and Virginia this weekend, at home, against I-AA opponents (albeit much better I-AA programs), I’m glad the Eagles came away with a win in convincing fashion. It seemed to be a typical game against a I-AA opponent not named UMass:


The Eagles rushing game shined against an outmatched Northeastern defense, with Montel Harris leading the way with 113 yards on 15 carries for two touchdowns, including a 48-yard run to pay dirt for the Eagles first play from scrimmage.

The surprise in the rushing game had to be true freshman Rolandan "Deuce" Finch. Are you surprised that Spaziani didn’t redshirt the freshman? And are you encouraged by the play of the Eagles running backs?

Jeff: I am not surprised at all. Injuries at running back can occur all the time and with Haden and Harris only being true sophomores, Finch could always redshirt next year or the year after.

As I said on Friday, I expected the run game to dominate Northeastern because of our huge size advantage on the offensive line. While I am happy with what the running backs did, I am not really encouraged at all. We had high expectations for them heading into the season and running on a I-AA school is nothing to get too excited about. Especially a I-AA program that went 2-10 last year.

Brian: The Eagles ended up burning the redshirts of six true freshman including Jim Noel, Conor O’Neal, John Wetzel, Michael Marscovetra, Luke Kuechly and Rolandan Finch. Speaking of quarterbacks, Marscovetra was the only quarterback that was perfect on the day (3 for 3 for 21 yards), but the majority of the snaps were split between Shinskie and Tuggle.

The game and the opponent didn't really afford the Eagles QBs the opportunity to distinguish themselves from one another, so for a second straight week Spaziani will use a QB rotation against Kent State.

"I think it's status quo," first-year BC coach Frank Spaziani said during his weekly conference call yesterday. "They improved, that's the first thing. They made some progress and showed some different stuff. I think we'll stay the way we were and we'll practice this week and we'll figure it out at the end of the week."


Do you like the decision to continue to rotate in starting quarterback candidates for our game against Kent State? And will you like this decision if the Eagles still don't have a starter after Saturday?

Jeff: Do I like this decision? Not exactly, but I can't say I dislike it either. Spaz's job is to win football games and after what he saw on Saturday, I doubt he feels he is jeopardizing the team's chances to win against Kent State by extending this "QB tryouts" another week. If it is not clear which quarterback will get all or the majority of the snaps against Clemson on September 19, I will not be happy with Spaziani at that point. Eventually, he needs to make a decision and go with it. If the player topping the depth chart performs poorly, put in #2. But there must be someone labeled the starter soon.

Brian: On defense, the young BC linebackers played well, led by true freshman Luke Kuechly (7 tackles, 2 TFL, 1 deflected pass). DiSanzo notched a safety, and LeGrande ended with four tackles. The young guys played well, and this unit should only get stronger when Will Thompson and Mike McLaughlin return from injury.

The official attendance for the opener was 33,262, a few thousand less than last year’s I-AA game against Rhode Island. While last year’s URI game was Parents’ Weekend (but was played in what looked like a monsoon), are you disappointed by the Eagles’ draw against Northeastern?

Jeff: I am not disappointed by the attendance at Saturday's football game at all. It was a holiday weekend and other than being a game, fans had no reason whatsoever to turn out. While last year's game turned out to be monsoon-ish, it was not bad weather at kickoff and don't forget that Parents' Weekend guarantees you a sellout against any opponent. If anything, I'm happy with the turnout but it was basically what I expected. The shutout and offensive performance should help the turnout this Saturday but the attendance figure will probably be similar.

Brian: The Eagles now turn their attention to Kent State, a team that defeated Coastal Carolina this week 18-0. The Golden Flashes are similarly breaking in a new starting quarterback in Giorgio Morgan. For facing a I-AA opponent, Morgan didn’t have the greatest of debuts, throwing for 201 yards and 2 INTs on 21 of 35 passing. The Kent State offense runs through Eugene Jarvis, who rushed for 141 yards on 27 carries and one score. Last year, the Eagles were able to limit Jarvis to 51 yards on 11 carries in the 21-0 opening weekend win at Cleveland Browns Stadium. The Eagles open as a 19 point favorite. Do you expect the Eagles to be able to neutralize Jarvis and the Golden Flashes offense on Saturday?

Jeff: Absolutely. Last year the Eagles opened against Kent State and their offense was not clicking yet. This year I expect our team to put up more points and even though they probably will not shut out Kent State again, they will hold them to one score or two at the most. I certainly like the Eagles at -19.