Headlines: Offense Tamed by the Tigers

Share All sharing options for: Headlines: Offense Tamed by the Tigers 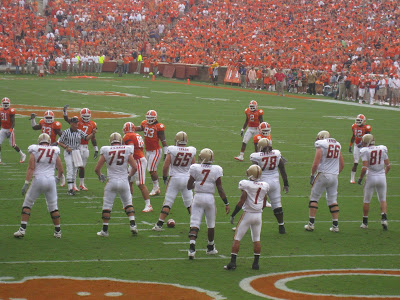 Brian: In perhaps the longest and ugliest performance of Boston College football I’ve watched since following the team, the Clemson Tigers scored a school-record 6 field goals en route to a 25-7 victory in Death Valley Saturday.

Let’s start off with the BC offense who managed 54 total yards of offense (with 56 of those yards coming in the lightning-delayed second half). When talking about the Eagles offense, the easy place to start is with quarterback and the play of Justin Tuggle and David Shinskie. Tuggle finished the day 4-of-20, 23 yards, 20 yards rushing, 1 TD and 3 INT. Shinskie was 1-1 for 2 yards and had a bad, bad looking fumbled snap that led to another 3 Tiger points.

Horrible offensive line play aside, did you like how the Eagles coaching staff used our two quarterbacks on Saturday?

Jeff: There's not much to like about anything relating to the QBs on Saturday but I absolutely think that Spaz did the correct thing by giving Shinskie two consecutive series and then going back to Tuggle for the rest of the game. I would like to see both QBs play again next week despite Shinskie's poor effort Saturday. In his defense, he had had watched his team from the sideline fail to gain a single first down aside from via penalties. Then, in his first game ever on the road or in front of a lrage crowd, the first play on both drives was a rushing attempt that lost yardage. So Shinskie started on 2nd down and more than ten yards twice. He deserves to get another shot against Wake Forest this coming Saturday. How would you have handled it if you were Spaziani?

Brian: Hindsight is certainly 20-20, but I would have left Tuggle in the game for at least all of the first half. While Tuggle played very poorly over the first few series, I think there is something to be said for leaving him in and getting him the extra reps and experience playing in a hostile environment. The next few weeks will make or break Boston College’s season, and leaving Tuggle in – at least in my opinion – may have helped the offense (and especially the offensive line) get into a better rhythm that can carry over into the next two weeks Atlantic Division matchups. I’ve never liked the Tom O’Brien philosophy of throwing in the backup QB for a couple drives in the second quarter as it seems to at least temporarily disrupt the offense’s rhythm.

That being said, after the first or second lightning delay, I have to question why we aren’t throwing in either Marscovetra or Boek under center. Nothing was working for the Eagles offense on Saturday. Why not throw either of them under center late in the third and fourth quarter and see what happens?

As we discussed on Friday, there may be more limited success with a two quarterback system over the last few years, but nothing I have seen from either Tuggle or Shinskie leads me to believe this is going to work at BC. Spaziani needs to establish a starter as soon as possible, and have that quarterback take 100% of the snaps on offense. That includes getting rid of the wildcat formation with Montel Harris in the shotgun. What is clear to me is that this team – and this offense – needs a leader. We need the team to rally around one person in the huddle and with how young these quarterbacks are, it simply will take time and snaps to establish a leader. Sticking with the QB rotation won’t do much to help establish a leader for the Eagles offense. My fear is that if the rotation continues, the offensive line and the rest of the offense will continue to look lost.


Brian: We turn to the defense and if there can be a bright spot in this game, you have to look at the play of the defense as that bright spot. The Eagles held the Tigers to 252 yards of total offense in a game where they were on the field for a majority of the game. The Eagles defense was not given an assist by the offense, which left the Eagles defending a short field for much of the game. Just look at the starting field position Clemson enjoyed on the day:

Given that the Eagles were able to limit the Tigers offense to zero touchdowns, when four Tiger drives started on BC’s side of the field (including drives starting from the BC 8 and BC 17), you have to consider this an outstanding performance from the Eagles. When Mike McLaughlin hits the field hopefully in a few weeks, he will help bolster a defense that is arguably still one of the best in the conference.

Are you encouraged by the young Eagles defense play so far? And can we expect our defense to keep us in games if the offense continues to lag behind the play of the offense?

Jeff: Absolutely. Clemson was both of our picks to win the division and the defense single-handedly kept us in the game for a while in their first test of the season and first game on the road. There is no reason to not be excited about the defense and if they can get us some points as they have had a knack of being able to do in the past, maybe we can still make a little noise in the ACC this year.


Brian: So where do we go from here? No time to lick our wounds as the Eagles face two pivotal ACC Atlantic Division opponents. How the Eagles rebound and play the next two weeks will go a long way towards determining whether the Eagles can make some noise in the Atlantic Division championship race. Lay out a game plan for Spaziani and the coaching staff for this upcoming week. How can the Eagles – particularly the offense – get back on track and rebound from this loss?

Jeff: The good news is that this week we play at home where, even though it was inferior opponents, our offense had two very good performances the first two weeks of the season. The other good news is that Wake's defense is not as good as Clemson's and they are also far less likely to return any punts for TDs since they do not have a CJ Spiller. I like the Eagle's chances of getting the running game going, putting the QBs in positions to succeed on Saturday and coming away with a win. After Saturday, we'll see if we have a team that can compete with FSU the following week. Given the many fluky factors going into Saturday's loss, I'm not going to write off the season yet by any means.

Brian: As I mentioned, this team needs a leader on the field. Now that we are already a fourth of the way through the season, Spaziani and the coaching staff need to establish a starting quarterback as soon as possible. Like, tomorrow.

Even though the Eagles might not see a defense as strong as Clemson’s the rest of the way out, the coaching staff will have to put a ton of work into preparing for Wake Forest. Jim Grobe's gimmicky offense has always given Spaziani-led defenses fits and we can’t expect as good of a performance from the Eagles defense as we saw last week. I don’t think it can be said enough how well I thought the defense played on Saturday. And while points off defense would certainly be nice, we can’t count on the defense to win us games outright. We’ll need to score points on offense, and that starts with putting in long hours this week with the offensive line. We’ll need the OLine to step up to help establish the run and buy Tuggle and Shinskie some time if we have any hope of coming away with the win on Saturday.

The other good news is that this is Wake Forest’s first road test of the season, having played their first three non-conference games at BB&T Stadium. Hopefully BC fans don’t give up on this team already and show up in full force at Alumni Stadium on Saturday. A rockin' Alumni Stadium can help bolster this young Eagles team’s confidence and potentially shake a Demon Deacon team making their first road trip of the season.

Jeff: I disagree that coach should name a starter tomorrow. Tuggle needs to win the job Saturday and not be handed it because Shinskie had fumbles. You don't become a leader on the field by being handed a position by default.

Brian: I agree you don’t become a leader on the field by being handed anything, but it is clear to me early that both Shinskie and Tuggle aren’t stepping up as natural leaders of this team. While we have Herzlich on the sidelines serving as the emotional leader of this team, no one really seems to be stepping up in this department on the field. Getting one of these guys extra reps and making it clear to everyone who the quarterback of this team is can only help. Tuggle has already been named the starter for each of the Eagles first three games, so I don’t think making the decision to stick with Tuggle this week is that far of a reach.

Jeff: I will agree the defense was awesome. Clemson ran 78 plays! Lastly, hopefully the young Wake players have some of the same shock that some Boston College players undoubtedly felt this past Saturday going on the road for the first time.