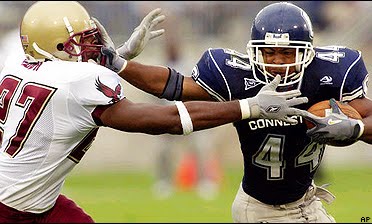 Brian: NESN’s Rob Lunn wrote a column on Saturday lamenting the lack of a rival for UConn football. But who does he think UConn's rival should be?

"UConn's rival
The obvious answer is Boston College, but the Eagles jumped to the ACC and now find themselves playing 95 percent of their schedule south of the Mason-Dixon Line. (Recruits take notice, if you wanna play big-time college football in New England, stick to UConn.) So where does that leave us? With few options, besides a strongly worded letter to BC."


As a UConn grad and former member of the Huskies football team, Lunn is certainly not an unbiased columnist. Who are we kidding? We aren't either.

First beef with this: Boston College actually plays two-thirds of their schedule north of the Mason-Dixon line (with seven home games and future non-conference road games against Notre Dame, Syracuse, Northwestern, to name a few). Do recruits really take notice? Would New England college football recruits really choose to play at UConn over Boston College? I know the Atlantic Coast Conference's football reputation has been through the ringer the past few years, but ACC football and Big East football shouldn’t even be in the same conversation right now. Your thoughts?

Jeff: Recruits take notice of a lot of things including opportunities to play in front of large national television audiences. I'm going to guess that last year's Music City Bowl, the ACC Championship Game vs. Virginia Tech and the night game at Florida State all drew higher numbers than UConn biggest game by a large margin. UConn football can not touch Boston College right now and this is just a biased, jealous columnist writing.

Also note that UConn goes on its fair share of road trips for football including South Florida, Cincinnati, and Louisville in conference. When the Big East replaced Boston College, Virginia Tech and Miami (Fla.) they broadened their own geographical umbrella by adding those schools.

Brian: I don’t understand the sour grapes here. Does UConn even need a rival? Note the recent rises of football programs like Boise State and South Florida. As they have moved up the I-A ladder, they have done so largely without a traditional college football rival. Maybe Boise State-Fresno State and South Florida-Central Florida could be considered rivals, but both of those rivalries have the feel of a big brother-little brother relationship rather than a true rivalry. In your opinion, who should UConn’s rivalry truly be?

Jeff: Ohio State has Michigan. Florida State has Miami (Fla.). USC has UCLA. But not everyone college football program has a major rival, and that list of programs without a major rival includes Boston College.

Boise State doesn't have a rival? I would guess that if you asked people at the University of Idaho, they would tell you differently. Mark Schlereth - former Idaho Vandals and NFL player turned ESPN football analyst - was just saying the other day how much he hated Boise State. He said the Boise State-Idaho rivalry was stronger than any he experienced in the NFL.

To get back to your question though, just like I've been saying as long as we've been blogging, Boston College should play UConn annually at Gillette Stadium in Foxboro. BC should still be UConn's rival.

Brian: You are joking, right? Boise State and Idaho as rivals? While the all-time series between the two school has been close – 20-17-1 in favor of Boise State – I can’t consider a series a rivalry when one team has beaten the other 10 times in a row going back to 1999.

Getting back to the question about UConn’s natural rival, it simply cannot and will not be Boston College (despite whiny columns like this one). Lunn talks about a rivalry having either proximity or history. In my opinion, though, you need a little of A and a little of B. While BC and UConn are close geographically, they have absolutely no history whatsoever. The all-time series is 10-0-2 in favor of Boston College. I’ll go ahead and use Lunn's argument against a UMass-UConn rivalry for the argument against a BC-UConn rivalry.

"UConn is making it ways up the D-I ranks, and if Michigan-Appalachian State has taught us anything, losing a game to a Football Championship Subdivision (formerly known as Division I-AA) powerhouse makes this potential series lose-lose."


This is the same feeling I have about playing Connecticut. It is simply a lose-lose proposition for Boston College. Why would we want to strengthen a fledgling I-A football program in our own backyard? There is simply too much bad blood between the two programs from the Eagles' move from the Big East to the ACC.

The natural rival of UConn is Rutgers. The two programs are very similar, and enjoy close geographic proximity now in the expanded geographic footprint of the Big East. They are both big state schools that have been historically insignificant in big time college football. I wish the Huskies would simply quit whining, look down I-95 and embrace their true college football rival: Rutgers.

Jeff: A rivalry is something that cannot be forced and is determined by the players and fans associated with both programs. I really don't care who the rivals of Boise State or UConn truly are. I'm just relaying what I heard and pointing out that you are wrong. By your logic, Boston College and Notre Dame are no longer rivals either. The all-time series between the Eagles and Irish is close but recently has been one-sided.

Brian: I wouldn't necessarily disagree with your last statement either. That is probably why Notre Dame is willing to end the Boston College series after 2010. Those associated with the Irish program don't like to throw around the 'R' word when talking about BC.