Headlines: The Crazy Offseason of 2009 Has Come Full Circle

Share All sharing options for: Headlines: The Crazy Offseason of 2009 Has Come Full Circle

Brian: We have certainly come full circle, that's for sure. Two days before the Eagles kick off the 2009 season, Jeff Jagodzinski is again looking for work: 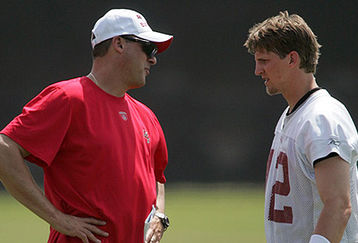 The Buccaneers announced today that they have dismissed Offensive Coordinator Jeff Jagodzinski.

Jagodzinski was named the Buccaneers offensive coordinator on January 29, 2009. He came to Tampa Bay after two years (2007-2008) as the head coach at Boston College. Prior to his stint at Boston College, Jagodzinski served as the offensive coordinator for the Green Bay Packers in 2006 and spent the two seasons (2004-2005) prior to that on the staff of the Atlanta Falcons.

Olson joined the Buccaneers as quarterbacks coach in 2008 and was retained when the team promoted Raheem Morris to head coach. Olson previously served as the offensive coordinator for the Detroit Lions in 2005 and the St. Louis Rams from 2006-07. He has also previously served as the quarterbacks coach for the Lions, Chicago Bears and San Francisco 49ers.

"I am certainly disappointed but I wish nothing but the best for Raheem Morris and the entire Buccaneer organization. I was given the chance to remain on staff as the quarterbacks coach, but felt that the timing for such a move was not in the best interest for either side. I appreciate the opportunity that was given to me. Again, I wish nothing but the best for this organization."

Apparently, Jags and quarterback coach Greg Olson disagreed with who the starting Buccanneers QB should be. Instead of making an Olson-for-Jagodzinski-switcharoo for the Bucs offensive coordinator and quarterback coach positions, Jags preferred to bow out. Now Olson has Jags' job and Jags is out of work.

While I won't be dancing on the flaming wreckage that is Jags' football coaching career and wish him nothing but the best, I do find this a tad bit ... ironic?