Grounding the Flashes and the Big Finish

Share All sharing options for: Grounding the Flashes and the Big Finish 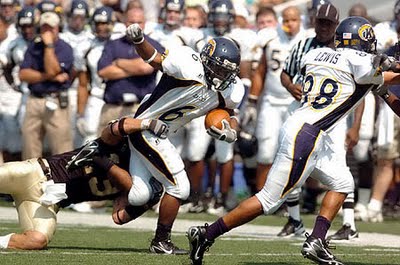 Brian: On Saturday, the Kent State Golden Flashes come to Alumni Stadium led by running back/return man Eugene Jarvis. Last week, Jarvis ran the ball for 141 yards on 27 carries in an 18-0 win over Coastal Carolina. He also caught 3 passes for 30 yards and scored a touchdown. Oh yeah, and he only added another 94 yards in kick returns for a total of 265 all-purpose yards in Kent State's week 1 victory. Will this young Eagles team be able to neutralize the big play threat of Jarvis tomorrow?

Jeff: Absolutely. No offense to Jarvis, but he is the one threat the Eagles have to worry about and I'm sure they'll be playing the run first all day leaving our experienced secondary in single coverage. If Jarvis does get a big play, it will likely be on special teams.

Brian: I agree the Eagles will likely build their defensive playbook around stopping Eugene Jarvis first and foremost. Kent State is also breaking in a new quarterback under center and his numbers were underwhelming in week one. Last week, Giorgio Morgan threw for 21 of 35 passing, 201 yards and 2 interceptions. Will it help the Eagles' young defense to scheme for stopping Eugene Jarvis, as we will have to key in on stopping another electric running back/return man next week in C.J. Spiller?

Jeff: I don't think there are enough similarities between Kent State and Clemson for this game against Kent State tomorrow to help us really prepare for a legit ACC offense and one of the top RBs in the country in CJ Spiller. On Thursday night the Tigers lost to Georgia Tech, but remember that Parker looked pretty solid and put up real impressive numbers in the second half.

Brian: Steve Conroy of the Herald reports that while the Eagles did beat Northeastern 54-0, the offensive line still has a long way to go:

"We’ve still got a long way to go," said center and tri-captain Matt Tennant. "Everyone is not really meshing the way I or (offensive line coach Sean) Devine wants. We’re not working together on our double teams, we’re not fitting the exact way we want, and I think that’s just a time thing. As the season progresses, our fits will get better, our pass blocking will get better and then everything will come together."

Will we see improvement in the offensive line this week, especially with the return of Rich Lapham?

Jeff: I wouldn't be surprised if we saw improvement out of nearly every unit of this team every week for the entire season. This team probably has the talent and skills to be very successful in the ACC, but just lacks experience in some key areas. I am confident that this team will work hard and show lots of improvement barring any major injuries.

Brian: The weather forecast for tomorrow calls for cloudy skies with occasional rain showers. High around 65 degrees. Will the rain help slow down Eugene Jarvis and the Golden Flash offense? Or will the weather conditions encourage even more of a ground attack from both the Flashes and the Eagles? Who has the advantage here?

Jeff: C'mon. It's Kent State. BC is favored by 21. We could play them in a dome or in a blizzard and BC would come out on top regardless.

Jeff: Great news for the Eagles. BC linebacker Mike McLaughlin rejoined the team and was practicing Wednesday for the first time since March. When do you expect McLaughlin to return?

Brian: I don't want him to rush his return to the field, but I'm cautiously optimistic he'll be back in the lineup for the Florida State game.


Brian: Boston College has 20 pros in the NFL this year, good for 8th best in the ACC. What, if anything, stands out to you from that list?

Jeff: Maybe that Maryland has more than us but it's only 4 more. No surprise Miami tops the list.


Jeff: BC still has two quarterbacks this weekend and will rotate in David Shinskie and Justin Tuggle. Will a starter emerge this week in time for the Clemson game?

Brian: I hope so. I will feel much less confident about our trip to Death Valley if a starter doesn't emerge this week and Spaz continues to play both guys.


Brian: The Emerald Bowl renewed their affiliation with the Pac-10 through the 2013 season but the conference will not be playing an ACC team. Instead, the Pac-10 will face a WAC team, Navy or Army. Your thoughts?

Jeff: Interesting how Army is going in 2011 if eligible and Navy in 2012. Not disappointed the ACC is out though because I like to drive to bowl games.


Jeff: I heard this on the radio yesterday. Kent State has the second worst all-time winning percentage in Division I-A behind Florida International. Guess who's third on that list? (Hint: It's an ACC team).

Brian: Everyone's gut reaction is to say Duke but they were really good back in the day. So I'll guess Wake Forest. Second guess would be NC State.


Brian: Get this. Albert Louis-Jean of Brockton is 15 years old and already has an offer from Boston College. Too soon?

Jeff: He's only 15 but he is a junior in High School so it's all good.


Jeff: Clemson and Georgia Tech looked a little sloppy last night. Clemson had two deadly mistakes on special teams, while Georgia Tech QB Josh Nesbitt completed only 36% of his passes and threw 2 picks. Still not in favor of preseason scrimmages?

Brian: Absolutely not. Both teams looked sloppy last week too - Georgia Tech had 5 fumbled and Clemson backup QB Willy Korn had two turnovers. How many preseason scrimmages would be needed to work out the kinks? If I'm told we can't have an NFL-style postseason, then college football shouldn't have an NFL-style preseason either.


Brian: Last one, final score prediction time. HD predicts the Eagles win 31-10. ATL has the Eagles as 28-10 winners. You gonna be a man and take the Eagles to cover the -20.5 point spread?

Jeff: Absolutely. I think we'll score more than either predict.

Brian: For the second straight year, I start the season 5-0. **Pats self on back**. And who says that picking lines preseason is difficult? You can follow our Pick 5 standings throughout the year on the left sidebar.

For my week 1 victory, I have honors and get to choose first.

Enjoy all the college football this weekend. Go Eagles!