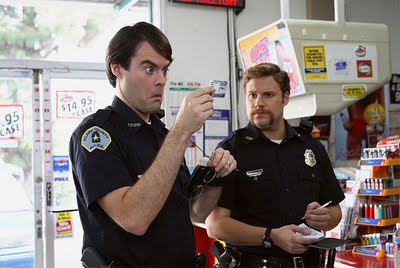 After the ACC's forgettable opening weekend, many ACC coaches and journalists came out of the woodwork, each with different theories on how to fix this ACC football mess. And by mess, we mean going 4-6 in non-conference play, including 0-4 vs. BCS competition and 3-2 against I-AA competition.

Jeff and I debate some of these theories, as well as one mouthy RS sophomore Kent State QB, in a game we call Good Cop / Bad Cop. Let's get our first suspect.

Brian as Bad Cop: NC State coach Tom O’Brien has joined Frank Beamer in calling for the NCAA to allow teams to schedule a preseason exhibition game against another team. Supposedly these scrimmages will get teams better prepared to play on opening weekend. "It will give you an indication of who and what you are against somebody else," O'Brien said. "Then when you open with a South Carolina or an Alabama like he did, you might be better prepared to take on the first game." O’Brien attributes support of the idea from the American Football Coaches Association from the influx of NFL coaches in the college ranks. Personally, I don’t like the idea. While the NCAA does allow college basketball to schedule up to two exhibitions before the season begins, college basketball and college football are very different beasts. With football, you risk injury when playing other teams. There was certainly no shortage of injuries this college football preseason to begin with; a inter-team scrimmage would only make matters worse.

The other issue I have with this suspect is that O’Brien and Beamer are just coming off as whiny. Perhaps it is human nature, but whenever someone feels slighted, they use the opportunity to try to bring about change. What would seem like a good idea under normal circumstances comes across the wrong way when someone like O’Brien or Beamer brings this up. Your teams just lost on opening day. Of course you want to find a better way of preparing your team for their opener since you fell flat in week one. This same phenomenon can be found with the slight of an undefeated Utah squad last season, and Mountain West commissioner Craig Thompson using Utah’s situation to bring about a college playoff or an automatic bid for the MWC. What is normally a pretty sound idea gets shot down prematurely given the circumstances.

So O’Brien and Beamer, the NCAA does allow for de facto "scrimmages" to start the season (although don't call them scrimmages in front of Al Groh of David Cutcliffe!). It’s called playing Division I-AA programs. Go and share this wonderful new revelation with your respective ADs post haste.

Jeff as Good Cop: Were you in the interview room Brian? How can you say O'Brien and Beamer are whining? They probably just simply answered a question from a reporter who set them up to sound whiny.

Personally, I like the idea. Make the scrimmaged among teams of similar caliber or turn the games against I-AA opponents into scrimmages. Either way would be win-win for the schools and the fans. You know ESPN would broadcast many of these scrimmages and they would greatly improve the quality of the product we see on the field the first weekend so we don't have to suffer through watching TOB's squad fail to score a touchdown two years in a row in their opening game and similarly, BC didn't look too polished last year against Georgia Tech. Wouldn't you have liked to have a crack at the Yellow Jackets when it was not the first game of the season?


Suspect #2 - ACC playing all league games in week one

Jeff as Bad Cop: Oh, this is a terrible idea!! They need to schedule the Miami (Fla.) vs. Florida State game on the first Monday night to get that paycheck the league loves so much. Besides that, all ACC programs need to schedule I-AA schools for college football's opening weekend. Then the league's record would be at least 8-4 and maybe 11-1 in good years! Florida State is already behind the eight ball in the Atlantic Division standings just because of a few miscues against a very good cross-divisional rival. A program shouldn't have so much riding on the first game of the season. BC's season this year would've looked much more hopeless if we didn't benefit from starting off with two extra scrimmages before heading south to play at Clemson.

Brian as Good Cop: I don't mind this idea. Why does the ACC have to go out and prove that it can beat the big boys of the SEC on opening weekend every year? All they ever do is fall flat on their face and give the league a very unnecessary black eye. Why not just keep opening weekend "in the family?" This way, as Caulton Tudor points out, the ACC wouldn't need any sort of damage control or spin after the first weekend as the best the ACC could do in week 1 is 6-6. That's an improvement on 4-6, to be sure. The one part I don't like about Tudor's proposal is having any intra-divisional games on the opening weekend. As you said Jeff, a program shouldn't have too much riding on week 1. So what the ACC should do is use one of the two non-intra-divisional, non-rivalry games and schedule these for week one. In this alternate reality, this year's opening schedule could have looked something like this:

I will selfishly schedule Virginia for the Eagles to open the season 1-0. NC State would have beat Duke and the wheels wouldn't have fallen off the NC State bandwagon quite so early. Virginia Tech would have blasted Maryland and kept their BCS Championship Game hopes alive, if only for a few more weeks.

Finally, you likely would have had not one but three great league games in week 1. Clemson at Miami (Fla.), Wake Forest at Georgia Tech, and Florida State at North Carolina all have the potential to be just as good as Miami (Fla.) vs. Florida State was. People would be gathering around the water cooler talking about not one but three epic ACC games, and that is exactly what this conference needs. This idea surprisingly has legs, even if it did come from the Raleigh News & Observer.

Brian as Bad Cop: This is a no-brainer. John Swofford should say "thanks, but no thanks" to the Atlanta Sports Council and the Chick-Fil-A Kickoff Classic going forward. What good has come of this game for the ACC? Last season, the ACC preseason media darling got pasted by the Alabama Crimson Tide, who went on to have an undefeated regular season. This year, while Virginia Tech was much more competitive, the Tide killed the BCS Championship Game hopes of another preseason ACC Champion pick. And, the way I see it, it’s not going to get any better from here.

In 2010, Chick-Fil-A has matched LSU vs. North Carolina in the Georgia dome on September 4. Is UNC going to be the cream of the ACC college football crop next season? Highly unlikely. Meanwhile, Les Miles will likely have LSU ready to stomp an ACC opponent for the third straight year. The 2011 game isn’t finalized, but The Raleigh News and Observer reports that the 2012 game will feature North Carolina State and Tennessee. Again, the trajectory of both of these football programs suggests that this will again be ugly for the conference. While the large payout for each school is certainly enticing, how many more opening weekend black eyes can the ACC take before the conference starts to be mentioned along with the Big East about revoking an automatic BCS bowl berth? I’m all for interesting intersectional games featuring ACC teams to start the season, but why do we have to continue to take it on the chin from a superior SEC program year in and year out? No thank you.

Jeff as Good Cop: Are you crazy? This type of exposure is great for the ACC. Alabama has had their best teams in a long time in back to back seasons and that was just tough luck for Clemson and Virginia Tech. If this series continues for a long time I'm sure the SEC will have a winning record in the series but that's OK. They're supposed to beat the ACC more often than not. This game is great for ACC fans, too. The fans of the ACC rep in this game will continue to sell out their half of the Georgia Dome

Clemson got embarrassed last year and the Bama beating they took had an impact on their entire season. Virginia Tech, however, showed it can play with the big boys and only dropped slightly in the rankings as a result. Swofford better not mess this one up by not continuing to send ACC schools to Atlanta on college football's opening weekend.

"I know they are a BCS team, but that really doesn't mean nothing," Morgan said today in a news conference at Dix Stadium. "This is college football - anybody can be beat." - Giorgio Morgan, Kent State QB


Jeff as Bad Cop: What an idiot. Didn't he learn a little from Legarrette Blount of Oregon? Blount said that Boise State deserved an ass whooping and Boise State gave said whooping instead of getting one. He should have just said that Kent State has improved since last year when they got shut out by the Eagles, blah, blah blah. It's not that hard.

Brian as Good Cop: BC should be on upset alert this weekend. At least that's what I would have the team thinking if I was Coach Spaziani. Nevermind the 54-0 final score from last week. That was last week, and it was against 2-10 Northeastern. The Eagles were far from perfect last Saturday.

Ok ... sorry. Who am I kidding? I can't possibly play the good cop on this one. I appreciate the swagger but how can you say stuff like this when you threw for no touchdowns and 2 interceptions against I-AA Coastal Carolina in your college debut? Not to mention Morgan suffered a mild ankle sprain on Saturday but will likely start for the Golden Flashes. If I was Giorgio Morgan, I wouldn't be giving the young, hungry Eagles defense any bulletin board material whatsoever. Finally, no style points for use of the double negative. Poor form, kid.