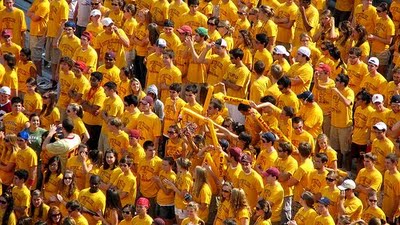 Fall is in the air, and that can only mean one thing: college football is back and not a moment too soon. What seemed like an excruciatingly long and painful offseason - which included an unexpected coaching change, plenty of injuries, an academic dismissal, a 25-year old minor league journeyman, one of the strangest QB competitions in recent memory and a cracked rib - has finally come to an end.

The season begins Thursday night when NC State hosts South Carolina on ESPN at 7pm ET. Tom O'Brien and the Wolfpack will try to avoid getting embarrassed by an SEC opponent on opening night for the second consecutive season. After that, we go to the blue turf of Boise as the #16 Oregon Ducks visit the #14 Boise State Broncos at 10:15pm. We're already getting our apartments ready. Is it too early to start tailgating?

The Eagles 2009 campaign begins at 2pm ET Saturday against Northeastern. If you are in town, go to the game. If not, huddle ye around the laptop monitor.

BCI will be moving into our regular season college football format later this week, where we'll hit you up with a healthy dose of headlines, oddsmakers, over/under, toss up, power rankings, and of course, the big finish. For the second season, we'll also be bringing back pick 5 where in 2008 Jeff (42-33) pulled out a 3 game victory over Brian (39-36).