Can This 2 QB System Actually Work? and the Big Finish

Share All sharing options for: Can This 2 QB System Actually Work? and the Big Finish

Brian: On Wednesday, the Globe’s Mark Blaudshun reported that while Tuggle will again be the starter for the third straight week, both BC quarterbacks – Tuggle and Shinskie – will play against the Tigers. Are Frank Spaziani and Gary Tranquill onto something here?

Now conventional college football wisdom espouses the meme that "if you have two quarterbacks, you have no quarterbacks." Not so fast my friends, says Chris of Smart Football?

"... But I think the winds are changing, and a two-quarterback system is quite possible. At its best you are likely to have the system Florida used to win the 2006 title: a starting quarterback in charge of most of the offense (Chris Leak), and a second guy with special abilities for whom a package is installed (then-freshman Tim Tebow). This example has now been made universal throughout football under the nauseatingly overused rubric, "the wildcat." (Had "wildcat" been around in 2006 think of all of the puns Dan Shanoff could have used to describe how Meyer used his young talent.) The reason that works though is because you choose a starting quarterback for one set of skills (passing, reading the defense, making checks, accuracy, some athleticism, etc) but another guy opens up a new dimension because of their running ability, and the spread with a mobile guy gives the offense certain numerical advantages it doesn’t get with an immobile quarterback."


Smart Football cites a few reasons why this crazy, cockamamie scheme might actually work. For one, the new no-huddle offenses where the offense checks down with the sideline limit the traditional QB role of "field general." Second, the rhythm or leadership argument is mitigated by having each quarterback specialize in their own "package" offense (think: spread or pro-style schemes vs. the "wildcat").

So Jeff, can this scheme continue to work? Or does this spell impending doom and gloom for the Eagles offense?

Jeff: I had been hoping, like you and most people, that a starter would've been announced by now. Unfortunately, that didn't happen but I think we'll still be OK. During the TOB days, he'd have a starter and then play his backup in the second quarter. The backup was typically the same type of QB as the starter only younger. Tuggle and Shinskie are not the same and will create some preperation problems for the defense.

Brian: Here is Spaziani's sound byte from this week's presser:

"We’ll do what we did before," said Spaziani. "Play two guys, but we’ll play the guy with the hot hand."


Do you think Spaziani's decision to play both Tuggle and Shinskie is simply to make Clemson prepare for both QBs? Or is he really going to stick with this 2 quarterback system throughout the season?

Jeff: It's too early to say the rest of the season. I think Spaz will settle on one as soon as one emerges which could happen tomorrow. I don't think the preperation issue for defenses is enough of a pro to continue this for the season.

Brian: Who emerges as the starter after the game on Saturday? Is this quarterback competition Tuggle's to lose?

Jeff: I told you after the Kent State game that I think Eagle in Atlanta was correct in guessing that Tuggle with start all 12 games this year. 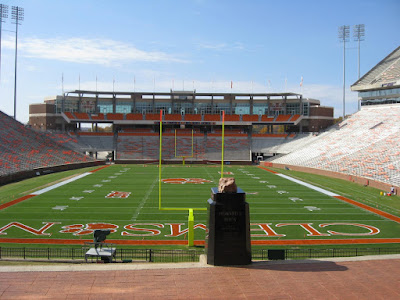 Jeff: The big recruiting news of the week was that DePaul (NJ) senior Shakim Phillips - the #5 wide receiver prospect in the country – gave a verbal commitment to the Eagles on Tuesday. Good news?

Brian: Great pickup, sure. Funny how not two years ago everyone railed on the BC wide outs and now we have one of the best WR units in the conference.


Brian: Clemson's Landon Walker will start at right tackle Saturday in place of Corey Lambert. Lambert struggled to contain Georgia Tech DE DeAndre Morgan. Heard anything about this down there? Thoughts?

Jeff: A lot of what I hear is very Clemson biased so it's tough to sort through.


Jeff: Who needs this win more? Clemson – already sitting at 0-1 in ACC play – or BC with three straight Atlantic Division matchups coming up?

Brian: Good question. I would say Clemson needs this game more to prove that they are a contender in the Atlantic. Dropping to 0-2 in ACC play with a third loss likely when they travel to Miami would make for a tough, tough uphill climb to win the Division.


Brian: The Eagles will likely play in front of their largest crowd of the season at Memorial Stadium. Will the noise and atmosphere be a factor for the young Eagles signal-callers?

Jeff: Let's hope not but how can it not be especially for Shinskie who has been away from football so much.


Jeff: Linebacker Mike McLaughlin will dress for the Clemson game but whether he gets his uniform dirty is up to him. Do you expect him to hit the field tomorrow?

Brian: We certainly could use McLaughlin on the field but I want him to take as much time as he needs to fully recover. My guess is we won't see him on the field.


Brian: More interweb grumblings about a West Virginia-for-BC-to-the-ACC move. What can finally happen to shut these clowns up for the last time?


Jeff: The weather report calls for a high of 79 degrees and 50% chance of thunderstorms. Advantage ______?

Brian: Yuck. Some southern hospitality Jeff! Not sure if this gives either team a distinct advantage but if I had to take a guess, I'd say slight advantage Eagles. Weather takes some of the 80,000+ fans out of this game?


Brian: Last one, HD predicts that Clemson will win this game 21-17. You really can’t find a college football pundit that has the Eagles winning this game. I know you live in a house divided, but man up and make a prediction. Who wins? What’s the final score?

Brian: A pair of 2-3 weeks for both of us last week leaves me with honors up 4 games on the season. I like Cincinnati in a virtual pick 'em and four favorites this week including a homer pick ... that doesn’t involve BC.
Jeff: I don't like your picks this week. I like my chances to make up some ground.

On the road to Clemson. Follow our weekend adventures on Twitter @bcinterruption. Leave your score prediction in the comments section below. Go Eagles! Beat Clemson.