Breaking Down The 2009-2010 Eagles Basketball Schedule

Share All sharing options for: Breaking Down The 2009-2010 Eagles Basketball Schedule

Brian: While I was out of the country, the Eagles released their 2009-2010 men’s basketball schedule. Let’s take a short break from all the football news and take a more detailed look at the Eagles’ schedule. For this undertaking we bring in good friend and BCI guest blogger Raj. Welcome. 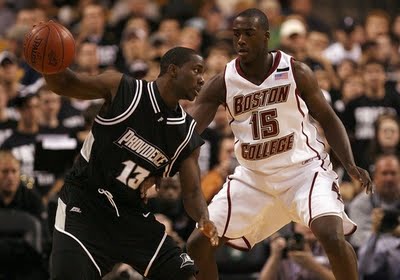 In non-conference play, the Eagles will potentially face three NCAA tournament teams in Michigan, Purdue and Tennessee (the last two hopefully in the Paradise Jam in the US Virgin Islands). Skinner & Co. will also take their unbeaten ACC-Big Ten Challenge record to Crisler Arena to face a tough, young Michigan squad. Both Providence (our only true road non-conference game) and Massachusetts always play the Eagles close. Last year, the Eagles went 13-3 in non-conference action with losses at Saint Louis, vs. Purdue, and at home vs. Harvard. The bad news for the Eagles is that Crimson senior guard Jeremy Lin returns for his senior season.

Raj: Expectations are high coming into this year for the Eagles despite the loss of our best pure scorer. Who fills that void? Who steps up as the leader of the team? Honestly, the only sure thing from BC basketball the past two seasons is an inexplicable loss to an inferior team, a signature from Skinner.

I expect at least three losses: One loss coming in the final round of the Paradise Jam, a loss to either to Michigan or Providence and another wild card loss to possibly upstart Rhode Island. Unlike years past, we should dominate UMass as two of the top 3 Minutemen scorers were lost to graduation. Those losses leave UMass very undersized at the forward position. I'll set the number of wins at 11, and hope for a young, energetic Boston College team to make me eat my words.

Brian: I'll go slightly higher and predict a 12-2 non-conference record for the Eagles this year. Both losses will come to Big Ten teams. The Eagles will lose again to Purdue in the second round of the Paradise Jam, and BC will also lose their unblemished mark in the ACC-Big Ten Challenge at Michigan. Unlike previous seasons, I don't expect any early letdown games this year, especially with only two true road games in non-conference play.

What do you see as the defining non-conference game on this year's schedule?

Raj: The ACC-Big Ten Challenge matchup with Michigan is definitely the key non-conference matchup on the schedule. Michigan is a well coached team that returns a solid core of returning players. Don't forget that this squad knocked off Duke last year. With a solid performance on national television and a win in Ann Arbor, the Eagles can really catapult onto the national stage early and provide our team with the exposure necessary even if we are close to a .500 team in ACC play. 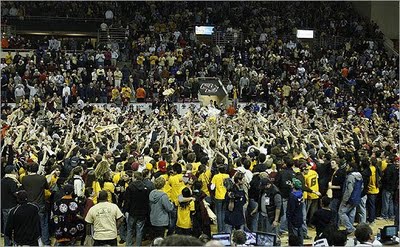 Brian: The first thing that jumps out to me – other than getting both North Carolina and Duke at home – is nothing the teams we play twice this season. Last season the Eagles faced the following five teams twice (with final 2009 Pomeroy rankings in parenthesis): Georgia Tech (93), NC State (79), Virginia Tech (66), Miami FL (40), and Wake Forest (25). That’s an average ranking of 60.6. Now I know the Eagles made the NCAAs last season, but some could argue that the Eagles benefitted from a favorable ACC unbalanced schedule last season to get to 9-7 in league play.

This season is a bit of a different beast entirely. The Eagles don’t have nearly as favorable a schedule as they did last season. BC plays the following teams twice this season: Virginia Tech (66), Miami FL (40), Florida State (36), Clemson (22) and Duke (11), for an average ranking of 35. Sure, not much is expected of Virginia Tech, Florida State or a Jack McClinton-less Miami team this season, but I certainly consider Clemson and Duke to be in the upper echelon of ACC teams this season. Clemson loses a lot of talent going into this season but quickly reloaded with a top 10 nationally ranked recruiting class of Milton Jennings (PF), Noel Johnson (SG), Devin Booker (PF), and Donte Hill (SF).

On the travel front, BC also lucks out by not getting to travel to Maryland or Virginia, our two closest ACC geographic neighbors. Skinner’s young team does, however, have to travel to Florida State, Miami, Georgia Tech and Clemson, the four schools furthest from Chestnut Hill. Not only will the Eagles have to travel great further this year, but the scheduling gods didn't do the Eagles any favorites with the placement of our eight ACC road games. The Eagles have back-to-back road games at Clemson and Duke in early January, Miami (Fla.) and Virginia Tech in late January and Wake Forest and Florida State in early February. Will the Eagles travel schedule and all these back-to-back road games prove to be a tough obstacle for this Eagles squad?

Raj: Great point. These back-to-back away games will be a test that these young Eagles have yet to encounter. Last season the Eagles had one losing streak of four games and after that put together an impressive streak where they didn't lose more than two in a row the rest of the season. But don't count your wins too quickly Eagles' fans. We split the only back-to-back road games we had last season, squeaking by a depleted Georgia Tech team in overtime.

The Eagles were extremely strong at home and I look for Conte Forum to become an even tougher place to play this season. Hopefully we capitalize on our home court advantage and don't drop games that we should win.

I like our schedule come February, and will be in a position to really impress the Committee come dance time. I do think this young team with a more experienced Reggie Jackson will play with a chip on their shoulder, showing people they don't need Tyrese Rice to be successful.

Brian: What games stand out to you most? In other words, which games on the ACC schedule will go the furthest to define just how far the Eagles can go this season?

Raj: The obvious choices would be North Carolina and Duke but those games are great for Sportscenter highlights. Let's take a look at the games against Wake Forest and Clemson.

Splitting the home-and-home series Clemson in January will be key and will set the tone for four road games against pretty stiff competition that month. Remember last January when we got beat by a bunch of nerds and went on to lose the next three ACC games. This simply can't happen this year.

We start off February with Wake Forest. February will be a very important month to securing our place in the NCAA tourney. Last year we got served by the Deacons both home and away. If we can pull out the game at Wake Forest, it would be a great resume builder for the Eagles close to tournament time. Not to mention a win here would give the team some confidence against a team that made us look like a Newton Y-League team last season.

Brian: Now having analyzed the schedule, do you think the Eagles can improve on their 9-7 ACC mark from a year ago? Or will the Eagles end up with more (less?) conference wins in 2009-2010?

Raj: I really like our schedule but I'm afraid I'll have to say less wins in 2009-2010. We can't expect to beat North Carolina and Duke again, and too many other teams have improved while we are still looking for that player who can score at will. (When you have 0 incoming recruits, is that ever a good thing?) Don't get me wrong. This team has potential and has an opportunity to be a better basketball "team" since we don't have to watch Tyrese Rice launch 30-foot threes when the shot clock is running down. However, Rice's hot streaks won some games for us last year and there isn't one player on our roster that teams will game plan for.

Key to the season: we go as Biko goes.

Brian: I will actually go slightly over here and say the Eagles go 10-6 in conference. They'll beat the team that they are supposed to beat - NC State, Virginia, Miami (Fla.), Virginia Tech, Florida State, Wake Forest, Georgia Tech - but will fall short against the league's elite teams. While a 22 win regular season will be enough to get BC into the NCAA Tournament, the selection committee won't be able to point to an Eagles' marquee win like they were last season.

Brian: The one thing that still bothers me is the ACC’s insistence on having 9pm ET tipoffs. This season the Eagles play two ACC games that start at 9pm – at Miami on January 19 and at home vs. Virginia on March 3. The Virginia game, in particular, worries me as the Eagles will likely be playing for ACC Tournament seeding or an NCAA Tournament berth and tip is at 9pm. Will the students show up? If last year is any indication, don’t count on it. When will the league office stop this nonsense of scheduling 9pm weeknight conference games? Raj, you come down as hard as I do on these 9pm league games, right?

Raj: Nine o'clock weeknight conference games are not as bad as you make them out to be. My ideal time though is a 7pm tip off. Now I'm a Superfan. I'd show up if there were games starting at 6am. But I don't think 9:00pm starts are all that bad. Games rarely last longer than 2 1/2 hours and getting home at 11:30 for a college student isn't too bad. That leaves at least 3 hours of Facebook stalking or video games.

So if students don't show up, I'm not so sure they would show up at all. The March 3rd game against Virginia falls during BC's spring break so that game is a wash anyhow. The one thing it does solve is the time conflict with Perspectives. I know too many people who missed games because of that class.

Brian: I have to disagree here. For the basketball games over spring break, the school relies on the season ticket holders and community members to give Conte some semblance of an atmosphere. This game starting at 9pm is going to turn away a lot of families and season ticket holders. I'm fairly concerned about losing what little home court advantage the Eagles may typically enjoy against a team we should otherwise handle easily. The flipside of this is any advantage we lose as a result of poor attendance vs. Virginia is gained when the Eagles travel to Miami in mid-January. Miami home games are typically poorly attended at the BankUnited Center to begin with, so hopefully Canes fans stay home for this 9pm tipoff.


Leave your thoughts, comments and predictions on the upcoming season in the comments section below.