Source: BC to play Army at New Yankee Stadium in 2014

Share All sharing options for: Source: BC to play Army at New Yankee Stadium in 2014 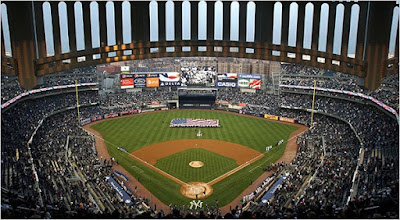 But wait, Notre Dame in 2010 was just the tip of the iceberg for Army, as they move their football operation from West Point to 161st and River. Scheduling the Irish seems to have opened the Army football scheduling floodgates for The House That Steinbrenner Built. Release the hounds!

Army will play a college football game against Air Force in 2012 at Yankee Stadium, the Times Herald-Record has learned.

This will be the first time the teams have played at a neutral site since 1965. Air Force beat Army 14-3 at Soldier Field.

The game was originally scheduled to be played Nov. 3, 2012 at West Point’s Michie Stadium, according to Air Force’s sports web site. It is not clear if the date will remain the same for the Yankee Stadium game.

Army will also play Rutgers in 2011 and Boston College in 2014 at Yankee Stadium, according to a source.

The Yankees have a press conference scheduled for 10 a.m. Wednesday to announce more college football games, including Army home games in 2011, 2012 and 2014.

"To make an announcement at this time would be inappropriate," Beretta said. "We will have a major announcement on future games and sites Wednesday."

Like the move? Disappointed we are getting Notre Dame, Air Force, and Rutgers' seconds? Will the novelty of playing in New Yankee Stadium have worn off by 2014? What about the fact that a majority of you are - you know - Red Sox fans? How about the fact that we play in the Bronx before our I-90 rival, New York's College Team, gets to play there?