Brian: Next up on our preview of the BCS conferences is the Big East. Yeah, I don't miss it that much either.

For reference, here is a composite prediction of how the experts think the Big East will shake down this season:
After last season where Cincinnati came out of left field and took home their first Big East football championship, West Virginia is back on top of the preseason rankings. But do Bill Stewart and the Mountaineers have enough pieces left post-White to reclaim their stranglehold on the Big East crown?

Good things are expected of Rutgers and Pittsburgh, while looks like Connecticut will be counting down the days to Midnight Madness. The plane has officially crashed into the Kragthorpe mountain at Louisville, while Syracuse's preseason predictions from every major college football prognosticator is consistent: unanimous suckage. More the same from the Orange?

The most important question though is who will win the conference and take their Orange Bowl Hokie beatdown in stride? 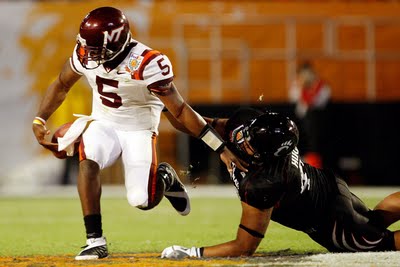 Brian: Not much is expected of Connecticut in the Big East this year, which is music to my ears. Not only are expectations low for the Huskies this season in conference, but UConn didn’t do themselves any favors this year with their non-conference schedule. Right now, I see 3-4 guaranteed wins (at Ohio, Rhode Island, Syracuse, Louisville) but after that, I’m struggling to scrounge up some more wins for Edsall’s crew. A home game against North Carolina and trips to Baylor and Notre Dame look like losses to me at this point. UConn has more home games than road games in the Big East this season, which is a plus, but the downside is that they have to travel to three of the best teams in the Big East (including defending champs Cincinnati, West Virginia and Pittsburgh). Even if they manage to steal one of these Big East games on the road, it’s not a given that they can take care of both Rutgers or South Florida at home. I have the Huskies going 2-3 out of conference and as a "best, best case scenario" 4-3 in the Big East. More realistically it will be 3-4 or 2-5 in the Big East, so I’ll confidently go with the under here (-200) and not make too much cash on this one.

Jeff: The Huskies, somewhat similar to BC but on a much smaller stage, have surpassed expectations year after year and Randy Edsall is a good coach so I am going over (+160) here.

Jeff: Pitt has a pretty legitimate non-conference schedule this year where they face NC State, Notre Dame, MAC Champion Buffalo and Navy. They might end up being slight favorites in all four of those so I think 3-1 is a most likely scenario. Add in one gimme against Youngstown State and they go 4-1 out of conference. From there they only need to win 4 Big East games which for a team in the preseason top 25, is not asking much. You should take the over (-165) here with reasonable confidence because even if they lose 2 OOC games they can still easily win 5 in conference.

Brian: Even though Pitt has creeped in to some preseason Top 25 polls, I’m not sold. You only have to look at our preseason blogpoll ballot from last season to caution you to use preseason polls as an indicator of future success. Cough. Auburn. Cough, cough. Clemson.

The Panthers enter the fifth season under head coach Dave Wannstedt, but the results have been mixed at best (25-23). Pittsburgh goes into this season with plenty of question marks on offense, including quarterback and running back (with the loss of LeSean McCoy), as well as breaking in a new offensive coordinator. Given all the question marks on offense, I have to expect a bit of a drop off from last season’s 9 game win total. The Panthers will have time to get off to a fast start with wins over Youngstown State and Buffalo, but Navy should at least give the Panthers a game, and I expect Pitt’s road trip to Raleigh to be an unsuccessful one. That’s probably 3 wins, and I would need 5 to go over. I’ll give Pitt the benefit of the doubt against Louisville, Connecticut, Rutgers and Syracuse, but the Panthers finish the season with Notre Dame, at West Virginia in the Backyard Brawl and vs. Cincinnati. I think this one will come down to the October 24 game against perennial underachiever South Florida. Win that game and the Panthers go over. Lose and I think it will be a 7-5, 4-3 season for Pitt. The difference I think will be South Florida’s offense under senior Matt Grothe, so I’ll take the under (+135), although I wouldn’t be surprised if Pitt gets to 8. This one is a toss up in my mind.

Brian: Speaking of South Florida ... Bull talent returns in the form of senior QB Matt Grothe and All-American DE George Selvie. While the talent is certainly there, it’s hard to get too excited about a team that started off 6-1 last season only to limp to a 1-4 regular season finish. That 1-4 mark down the stretch included a 24-20 loss at punch-less Louisville. The Bulls will get out of the gate at 3-0 with wins over Wofford, at Western Kentucky and Charleston Southern, but that will be counterbalanced with two losses at Florida State and at home to Miami Fla (but props to USF for scheduling some tough, in-state ACC competition). To go over, that would mean USF would nearly run the table in the Big East, and I just don’t see that happening. Although they are both home games, I’m predicting that both Cincinnati and West Virginia will take care of South Florida, and a trip to Rutgers in mid-November could just as easily be a loss (the Scarlet Knights handed the Bulls a 49-16 beat down in Tampa a year ago). A push would not surprise me, but I think it’s more likely that USF goes 4-3 (or worse) in conference rather than 5-2 so I’ll take the under (-120).

Jeff: You talked about the two high profile players returning to South Florida this season, but you took the under? Last season was a disappointment for the team which could've easily won the Big East in a year when WVU tripped up a little. But now the great players are gone at WVU and the league is theirs for the taking once again. I'm going to put the Miami and FSU games down as losses even though there's a chance they could steal one of those games. Then like you said all they need to do is go 5-2 in the Big LEAST. USF may very well win the league this year so why wouldn't you take them to go 6-1 or 5-2. I like the over (-110) here and will be happy to take your money.

Jeff: Rutgers has an interesting line here at 8 when they have 4 gimmes in non-conference play. Then let's say they should be able to beat Syracuse and Louisville this year and lose at West Virginia and Maryland. This leaves them 6-2 with four toss-up type games left. But since I am more of a Rutgers hater than a Rutgers fan, I going to go ahead and put their season opener against Cincinnati down as a loss leaving them 6-3 with three toss-ups left. Those remaining games are against better coached teams - that's right - better coached teams in UConn, South Florida, and Pitt. I like taking the under especially when it's +160. The worst I'll do on this one is push.

Brian: Yes, Rutgers is hot, coming off finishing last season with 7 straight wins including stopping an equally hot NC State team in the Pizza Bowl. However, gone are Mike Teel and Kenny Britt, two of the most prolific offensive players in Rutgers history. There are plenty of questions on offense, including who will start under center. The front runner, fifth year senior Domenic Natale, threw for a whopping 36 yards last season (but hey, I guess that is 36 more yards that BC quarterbacks threw for last season). Offensive questions aside, Rutgers might have the biggest joke of a 12-game football schedule in the history of a BCS conference program. Seriously. Out of conference superpowers Howard, Florida International and Texas Southern visit Rutgers Stadium, and the Scarlet Knights also travel to Maryland and Army. I don’t think much of the Terps chances this season, so that’s 5-0. Easy. From there, a 4-3 finish in the Big East is more than possible, as Rutgers’ toughest Big East opponents all come to Piscataway – Cincinnati, Pittsburgh, South Florida and West Virginia. Three trips to Big East bottom feeders Syracuse, Louisville and Connecticut should be three more Ws, and I’ll easily give 1 of 4 of their Big East home games to RU for their 9th win. There’s a reason the over is -230 here, since I’m sure you could find I-AA teams that have a tougher SOS than Rutgers. Rutgers easily goes 9-3 or 10-2 so take the over (-230), but don’t expect me to have Rutgers anywhere near my Top 25 blogpoll ballot, EVEN if they finish 10-2. I’m not kidding. Why reward a team for beating 5 crappy non-conference teams and going 5-2 in the Big East?

Brian: Even with Pat White gone, the Mountaineers should coast to either 6-1 or 7-0 to start the season with wins over Liberty, Syracuse, Marshall, Connecticut, Auburn and one of East Carolina/Colorado at home. The second half of the season should determine whether West Virginia can regain the Big East title, as they travel to South Florida, Cincinnati and Rutgers, and play Pittsburgh and Louisville at home. I like WVU to go no worse than 3-2 in those games and if I had to chose, I’d give them Ws over South Florida, Louisville and Pittsburgh. That’s 9 including 5 Big East wins. Go with the over here (-110), but an under with the Mountaineers finishing 8-4 would not surprise me. Anything less than 8 wins for Bill Stewart and the Mountaineers, though, and I would be SHOCKED!

Jeff: I very much disagree that Auburn is a win for West Virginia. Sure Auburn had a tough year last year but they will bounce back while the Mountaineers have slid. Also, East Carolina is a legitimate threat and Colorado is another improving team. So what you see as 6-1 at worst I see as 5-2 at best. Then in the rest of their Big East play, West Virginia is likely to split the games games against Pittsburgh, South Florida, Rutgers and Cincinnati. I'm already up to four losses for the Mountaineers. Not to mention West Virginia is also the team with a target on their back in the Big East so you never know if another team will take the opportunity to kick them while they're down and provide an upset. Under (-120).


Brian: Surprisingly, no line on this site for Cincinnati, as well as - more predictably - no lines for Louisville and Syracuse. And looking back, Jeff and I disagreed on every Big East team this year. Should have labeled this segment good cop / bad cop.