Brian: Next up on our preview of the BCS conferences is the Big Ten, the redheaded stepchild of BCS football conferences that I am forced to show a mild interest in since I'm attending Northwestern this year.

For reference, here is a composite prediction of how the experts think the Big Ten will shake down this season:

Who will emerge from the Big Ten this season, only to get their annual beatdown at the hands of USC in the Rose Bowl or the champion of God's Conference in the BCS National Championship game? Who will be this year's Daniel Murray, the Hawkeyes field goal kicker that put the rest of college football out of their misery by preventing a third straight Big Ten slaughter in the BCS National Championship game? 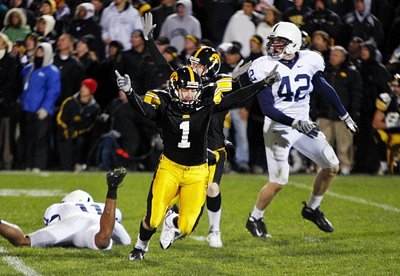 Brian: Wow. How the mighty have fallen. I don’t think Wolverine fans can be too thrilled with an over/under line set at a mediocre 6-6. Hopefully for Michigan fans, though, the bottom fell out with last season’s 3-9, 2-6 Big Ten debacle. That 3-9 record included going 1-3 out of conference, losing to Utah at home in the opener, getting beat up in South Bend 35-17 and getting shocked by a 2-6 MAC team. At home. In front of 100,000+. So how does Rich Rodriguez and bump up the win total by 4 games from a year ago? Water down the out of conference schedule! UM has done precisely that this season. This year, Michigan gets two directional Michigan teams (and not the best of the three in Central Michigan), Notre Dame and I-AA Delaware State – all in the Big House. Last year’s Toledo game gives me pause, but let’s say for sake of argument that Michigan comes out of the out of conference portion of their schedule at a healthy 3-1.

That leaves me looking for 4 wins on their Big Ten sched … which I just can’t do. I can’t. Their Big Ten road sched is formidable, with the Wolverines having to travel to Michigan State, Iowa, Illinois and Wisconsin. All likely losses. At home in Big Ten play I see Michigan going 2-2, with wins over Indiana and Purdue, and losses to Penn State and Ohio State (yet again). (It certainly doesn’t help Michigan that they miss both Minnesota and Northwestern this season. Well, at least Minnesota. I actually expect Northwestern to be competitive this season. But I digress.) That gets me to 5-7 in a best case scenario. Even with an eight game home schedule, I only see UM winning 5 games at most, and losing all of their road contests. I will go with the under here (+165) with a fair degree of confidence, although it wouldn’t shock me if Michigan plays in a bowl and pushes on this line.

Jeff: Illinois plays an interesting out of conference schedule where they only have one guaranteed win in Illinois State. Missouri, Fresno State and Cincinnati are all potential losses but it's here that determines where you go with this pick. If Illinois goes 4-0 in non-conference play then 8 wins seems to be a very strong pick if not a done deal. But Cincinnati won the Big East and Missouri won the Big XII North last year so would saying Illinois goes 4-0 out of conference be a little aggressive? No. This is not 2008 we're talking about and I do think 4-0 for Illinois in non-conference play is how things will shake out. It is not an extremely confident pick but I am going OVER (-150) for Illinois.

Brian: Hard to predict 8 or more wins for an Illinois team that went 5-7 a year ago, missing out on going bowling. It’s also hard to believe this is the same team that two years ago made a Rose Bowl appearance (and subsequently got dismantled by USC as the Illini had no business being in that game). The Illini will certainly put up some points with QB Juice Williams and WR Arrelious Benn (67 catches, 1,000+ yards) leading the way. But arguably the defense will be worse than it was last year. The schedule this year is fairly front loaded. Illinois starts with the Arch Rivalry against Missouri in St. Louis, where Missouri has won the last 4 and leads the all-time series 15-7. (No wonder this series has been discontinued after 2010!). If Illinois can’t escape St. Louis with a W, they are likely staring down 1-4 by mid-October with losses at Ohio State, Penn State and Michigan State. From there on out, Illinois would have to run the table and I just don’t see that happening with home games against Michigan, Northwestern and Fresno State, and a late November road trip to Big East champion Cincinnati. I have to believe they’ll lose 1 if not 2 of those games down the stretch. Most experts have the Illini at 2, 3 or 4 in the final Big Ten standings this season, but I just don’t see the reasons for such optimism. After all, this is the same team that lost three straight down the stretch to Western Michigan, Ohio State and at Northwestern to miss out on the postseason. And it’s not like Ron Zook has an amazing track record in his first four years in Champaign (18-30). Therefore, I’ll confidently go with the under (+120) here. Sure, they’ll be improvement, but I think improvement will have to come in the form of 7-5 or 6-6, not 8-4 or 9-3.

Brian: Even with the departures of running back Shonn Greene and DTs Mitch King and Matt Kroul, much of the pieces on a team that went 8-4, 5-3 Big Ten a year ago return. The biggest hurdle this season will be the Big Ten schedule. For some odd reason, the Hawkeyes have to go back to East Lansing for a second straight year. Much like my diagnosis for Michigan, the Hawkeyes Big Ten road schedule isn’t doing them any favors. Iowa’s Big Ten road schedule is absolutely brutal, with stops in State College, Madison, East Lansing (again) and Columbus. I know the Hawkeyes like to boast that they were 12 points away from an undefeated season last year, but 3 of those 4 losses came on the road. And this season’s road sched is much more daunting. Off their Big Ten schedule this year are Purdue and Illinois in favor of Ohio State and Michigan. This is probably a wash, with the Hawkeyes going 1-1 against Purdue/Illinois in 2008 and likely going 1-1 against Ohio State/Michigan in 2009. Iowa should go 4-0 out of conference with wins over I-AA Northern Iowa, Arizona, Arkansas State and at Iowa State, but I’m struggling to get Iowa to 5-3 in the Big Ten this year to go with the over. I’ll hesitantly take the under (+100) here, banking on Iowa losing their four Big Ten road games (Penn State, Wisconsin, Michigan State and Ohio State) and banking on either Arizona or Northwestern to pull off the upset on the road. 7-5, 3-5 for the Hawkeyes this season. Go with the under (-130).

Jeff: Iowa won 8 games last year and a lot of those were after Shonn Greene emerged as a beast of a running back. Greene is gone this year though and Iowa has 2 BCS conference teams on their schedule out of conference so there is really no way in your right mind that you would put some of your hard earned money on Iowa to win at least 9 games. No way. Under (-130).

Brian: Over. Over. Over. I have Michigan State winning no less than 9 games this season. The Spartans will likely go 4-0 out of conference with wins over Montana State in the opener, Central and Western Michigan and at Notre Dame. From there, 5-3 in conference is definitely possible with very winnable games against the likes of Michigan, Northwestern, and Iowa at home, and Wisconsin, Illinois and Minnesota on the road. Missing Ohio State on the schedule this year certainly helps matters out for Mark Dantonio and MSU. It won’t come easy, and I would not be surprised if Michigan State pushes at 8, but I don’t see any red flags preseason that would lead me to believe the Spartans can’t at least reproduce last season’s 9 game regular season win total. I usually don't say this, but go with what Jeff said on this one. Go with the over (+140).

Brian: This one has to be the toughest line of any of the Big Ten team’s lines. I am definitely not sold on the Badgers under Bret Bielema as he’s gone from 12-1 to 9-4 to 7-6 in three seasons in Madison. That being said, Wisconsin is certainly capable of matching its regular season win total from 2008 and surpassing it by a game or two. Lucky for Bucky Badger, UW misses Penn State on the schedule this year, and plays all 5 of the teams projected to finish towards the bottom of the Big Ten standings (at Indiana, Purdue, at Minnesota, at Northwestern, Michigan). Sure there are more road games than home games in that group of five, but those are all very winnable Big Ten matchups. Out of conference, Wisconsin draws Northern Illinois, Fresno State, Wofford and Hawaii. I certainly hesitate taking UW in all four of those matchups after last season’s 36-35 win in OT at home over Cal Poly, but will give the program the benefit of the doubt and give them 4 wins. 5 + 4 = 9, so I’ll reluctantly take the over here (-115), although my gut tells me this looks a lot more like a push than any of the other lines.

Jeff: What do I know about Wisconsin this year? Nothing. I honestly know nothing about this team. But, in general I expect the Big Ten to be improved this year and maybe the Badgers will bounce back from the beatdown they suffered at the hands of Florida State in the Champs Sports Bowl and I'll take the over (-115).

Brian: Jeff, you always love Penn State. The line here could be 10, 11 or even 12 games and I'd bet you'd still take the over on this one. I'm not as optimistic about Penn State as you are this year, especially if what they are saying is true about offensive line experience. The Nittany Lions only return 39 starts on the O line this year. Still, it's not like Penn State is straining themselves this year with a non-conference schedule composed of Akron, Syracuse, Temple and Eastern Illinois. From there, to think that Penn State will go less than 5-3 in the Big Ten is certainly a stretch. They have some tough games mixed in there, including at Northwestern on Halloween (don't laugh, I'm serious), Ohio State (November 7), and at Michigan State for the Land Grant Trophy. Still, I see Penn State at no less than 8-0 before coming to Evanston on Halloween, and for JoePa and the Lions to go 0-4 or 1-3 in November seems unfathomable at this point. Take the over (-225).

Brian: Ohio State loses a lot of talent from last year’s 10-2 season. But then again, they are Ohio State ... in a thoroughly mediocre conference. As mentioned earlier, the Buckeyes miss Michigan State and Northwestern this season, not that they were much competition for OSU a year ago (the Buckeyes beat those two teams by a combined 90-17). The biggest tests for Ohio State will be USC at home on September 12 and at Penn State on November 7. Other than those two games, not much stands in the way of another 10-2 season and either a Rose Bowl or BCS at-large berth. With 7 home games and a virtual 8th home game in Cleveland (the Patriot Bowl – remember that? – against Toledo), the schedule sets up nicely for Ohio State to make another run at the Big Ten title and a National Championship Game berth. Take the over (-125).


Brian: No lines were available for Indiana, Purdue, Minnesota, and Northwestern as apparently not much is expected for these programs in 2009. But just for fun, how many games do you have my grad school Northwestern winning this season?

Jeff: 7 or 8 wins for your Northwestern Wildcats.