Brian: Today - since we are in the dead of summer with not much BC news to be had - we start in on previewing the upcoming college football season (66 days and counting!) in a game of Over/Under.

Borrowing from the Florida State blog Tomahawk Nation's For Entertainment Purposes Only series of posts, we take a look at one site's futures odds for regular season wins (regular season wins do not include conference championship games or bowl games). We will preview each of the 6 BCS conferences over the next 6 weeks to gear you up for college football (I keep telling myself it's right around the corner!)

First up of the 6 BCS conference, the Pac 10 - less Washington, Washington State and Stanford, where future odds for regular season wins are currently unlisted. We'll work our way west to east, finishing up with the ACC. We'll check back at the end of the year to see how we stacked up to with the results from the 2009 season.

Finally, a disclaimer. This exercise is for fun only. BC Interruption in no way endorses gambling. 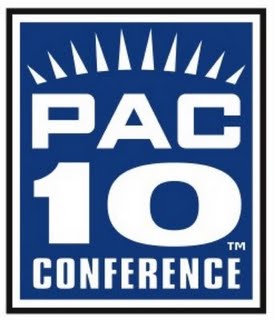 Brian: The big question with the Wildcats this year will be who is starting under center. Sounds a bit familiar. Arizona will have to replace Senior Willie Tuitama who threw 67 touchdown passes in his four years on campus. Still, except for questions about the QB and the offensive line, Arizona returns much of the talent that took down BYU 31-21 in last year's Las Vegas Bowl. That team finished 7-5, 5-4 Pac 10, and it is hard to imagine Arizona losing more than one game from a year ago. So I'll take the slightly pessimistic outlook on Arizona's season, go under (-120) on this one and give 'Zona 6 wins on the year, which should be good enough for another bowl berth. Specifically, the Cats will win vs. Central Michigan, Northern Arizona, at Washington, Stanford, UCLA, and Washington State.

Jeff: Arizona will not make it through their non-conference schedule without a loss. The questions is will they lose one or both of the games between Central Michigan and Iowa. If Arizona does lose to Central Michigan, this might be bad news for Eagles fans as the Chippewas will already have a win at a BCS conference opponent going into their matchup against the Eagles. But as for over/under, I like the under (-120) here without much hesitation as a 6 win season is good for the Wildcats. Washington and Washington State can't be the gimmes they were last year.

Jeff: Last year was full of disappointment for Arizona State. Despite winning four conference games, they only won five overall. This year the team will rebound and at least has 2 out of conference gimmes before heading to Georgia and getting their first loss of the season. Then conference play sets up that they will be favored in a least four games and should be able to get an upset victory in there somewhere to get them to 7 wins on the season. Over (-120).

Brian: If Arizona State doesn't get back above .500 this season, I have to think Dennis Erickson will be on the hot seat if he turns in another 5-7 or 6-6 season. Arizona State is a team that is very similar to Boston College - all defense, no offense. The defense should keep them in games, and its hard to imagine them winning less than 6 games with built-in wins against Idaho State, UL Monroe, at Washington State and Washington. I think Arizona State can find three more wins in there between at UCLA, Arizona, at Stanford and Oregon State at home so I will go over (-120). 7+ wins for the Sun Devils this season.

Brian: Expectations are high in Berkeley as the Bears return Pac-10 rushing leader Jahvid Best, who rushed for over 1,500 yards last season. You may remember Best from his cameo as Slimer from Ghostbusters during last year's game at Maryland. The QB position is less cloudy than it was a year ago, too, as Kevin Riley looks to take the top spot on the depth chart. Cal should breeze through their non-conference slate of Maryland, Eastern Washington and at Minnesota, and to go over, I'd have to think that Cal is going to coast through the Pac 10 sched and go either 7-2 or 8-1. Even though Cal gets USC at home this season, I still count that as a loss as well as the late September trip to Autzen. My guess is Cal will drop another game that it shouldn't ... possibly getting tripped up in the desert at Arizona State or at Stanford in the Big Game. So I will go with the very unmanly push and say the Cal Bears win 9 games. I'm not touching this one.

Jeff: While the Bears will be favored in their three non-conference games, I do not expect them to defeat both Maryland and Minnesota. Then once conference play begins, you have to consider USC a loss as well as one or two games among games at Oregon, Oregon State, and at UCLA. Throw in another Pac-10 game upset and I'm taking the under (+125) confidently.

Jeff: Taking Oregon to go over here is THE pick of all the Pac-10 teams. Oregon looked good at times last year and especially in their bowl game against Oklahoma State. The Ducks' defense can't be any worse. They have a potentially tough out of conference schedule with Utah and Boise State but after they get past those two games, as I suspect they will, it's smooth sailing from there in. Over. Over. Over (+152).

Brian: The Ducks are highly ranked preseason, with some publications having them as high as #13. Still, in order to go over I would have to think that the Ducks could match their regular season win total from last season. I have to think that the transition from Coach Bellotti to Coach Chip Kelly will not go as smoothly as some people may think. The Ducks also didn't do themselves any favors with their out of conference schedule, having to play BCS Busters Utah and at Boise State on the Blue Turf. If Oregon can go 2-1 out of conference, I can see them going 7-2 or 8-1 in conference, but I have my reservations. Especially if the junior-laden Ducks get tripped up by both Utah and Boise State. I'll go over (+152), but just barely, and it certainly won't come as easy as Jeff is alluding to. I'll give the Ducks 9 wins this season.

Brian: I am going to go under (-110) here. While the two-headed Rodgers offensive monster should be formidable (Jacquizz rushed for 1,253 last season and James caught 51 balls for 607 yards and 4 TDs), the Beavers will have to replace much of their defensive unit. The Pac-10 schedule doesn't cut Oregon State any breaks this year, with trips to Arizona State, California, USC and Oregon all potential losses. Throw one more loss in there - say, September 19 hosting Big East champion Cincinnati - and you've got your under. Oregon State will certainly be bowling, but I see 6-7 wins this season instead of 8-9.

Jeff: Oregon State had a major letdown at the end of last season by being embarrassed by Oregon when they had a chance to head to the Rose Bowl, but I am going to go against Brian and say that they will get through their non-conference games even though a road trip to Las Vegas worries me more than Cincinnati at home. From there I fully expect five conference wins and will take the over (-120), even though I'd be surprised if they cover by any more than a 1/2 game.

Jeff: If I were Brian here, I'd push because UCLA has 6 wins and a bottom level bowl written all over them but I'm not Brian so I will instead take the over (-180) and hope that Neuheisel's system and players start clicking a year earlier than expected and the Bruins get to 8 or 9 wins.

Brian: Is the football monopoly over in Southern California? Probably not, as Neuheisel stares down another year of rebuilding in Westwood. Six wins on the season would be an improvement of two wins after last year's pathetic 4-8 season. However, I, too, will go out on a limb on this one and go over (-180). The Bruins have a VERY favorable 2009 schedule with home games against San Diego State, Kansas State, and Washington, and road trips to Tennessee, Arizona and Washington State. I'm banking on the fact that there's a seventh win in there somewhere. Can the Bruins shock the Pac-10 and take down USC, Oregon or Oregon State? Probably not. But more likely, Neuheisel and UCLA could grab their 7th win at Stanford, at Oregon State or vs. California. Don't disappoint me, Neuheisel. If you do, I'll recoup my losses by winning your NCAA Tournament Pool next season.

Brian: Last, but certainly not least, the USC Trojans. An over here would basically have me pegging the Trojans as another BCS National Championship Game contender with an 11-1 or 12-0 perfect regular season. Pete Carroll has gotten the Trojans to 11+ wins (including bowl games) in each of the last 7 seasons, but I foresee them only getting to 10 regular seasons wins this year. I'm taking the under here. The Trojans always seem to find a way to lose to a Pac-10 opponent they have no business losing to (Oregon State 2008, Stanford 2007), which knocks them out of the BCSNCG. I imagine this trend will continue. Either that, or the Trojans could very well drop their game at Autzen on October 31. Their early season trip to Columbus looms large. The talent is of course always there, but Carroll and the Trojans will be breaking in a new QB under center. I'm giving USC a 10-2 regular season record - which of course a disappointment in LA - and going with the under (-140).

Jeff: The big game for USC is at Ohio State the second week of the season and I expect them to dominate Big Ten competition once again, new quarterback aside. When it comes to USC, take the over (+110) until they prove otherwise. It's money in the bank.


What did we screw up, Left Coast Eagles and Pac 10 prognosticators? Your thoughts?