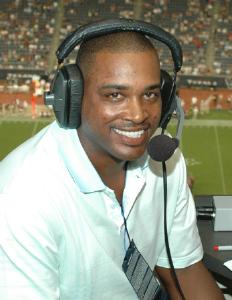 Jeff: Last Friday, I finally got around to watching ESPN's College Football Live featuring Massachusetts on their 50 States tour... all I can say is WOW! Could Andre Ware be any more wrong? I think the Eagles could go to Tampa again but a 7-5 or 6-6 season certainly wouldn't shock me. But 5-7 or worse would. That means only 2 ACC wins. Let's be honest. The ACC just isn't that good.

Brian: I was a little taken aback by what Ware predicted as well. Here is specifically what he said.

Ware talked about how Coach Spaziani was dealt a tough hand with a new quarterback, a new running back, and his star All-American linebacker having been diagnosed with cancer.

He then goes into analyzing the schedule, commenting on how the schedule is very back-loaded with games against Wake Forest, Florida State, Virginia Tech and NC State in the middle of the season. Conclusion:

"After the first two games of the season with Northeastern and Kent State, it's going to be tough to find another win for BC."

First, what is wrong with Montel Harris and Josh Haden? A new running back? Do your homework. You are doing a tour of Massachusetts and BC is the ONLY Division I team in town. You should have known we aren't replacing our running backs and, in fact, they are one of the better 1-2 running back tandems in the conference.

Second. 2-10?! When was the last time an ACC team not named Duke finished 2-10 or worse? You have to go all the way back to 2003 to get there with North Carolina. That season, the Tar Heels went 2-10, 1-7 ACC. OK, OK. It is true that Gary Tranquill was the offensive coordinator for UNC that season, but still. It's just not going to happen. If you have any doubt, simply look at the parity in the Atlantic Division last season, where no team finished below .500 in ACC play.

Wake Forest and Central Michigan at home, and Virginia, Maryland and Notre Dame on the road are all very winnable games. If we finish 2-10, I will write Andre Ware a personal apology letter. For now though, I'm simply chalk up Ware as another ESPN talking head that has no idea what he's talking about.