Forde has Virginia Tech vs. Boston College rounding out his Top 10, and it’s the only game on his list that features an ACC team. BC vs. Virginia Tech beats out Miami vs. Florida State, Florida State vs. Clemson, and Clemson vs. Georgia Tech:

Why It's Hot Now: The former Big East opponents have upgraded their rivalry in the ACC, facing off four times in the past two years -- twice in the regular season and twice in the ACC title game. In those meetings the regular season has belonged to the Eagles and the postseason has belonged to the Hokies. With BC's moving on to its third head coach in the last four years, there's no telling how that might affect the rivalry.

Upper Hand Today: Tech has the league hardware and BCS bowl appearances on its side, which more than offsets losing three of the last five in the series.

Upper Hand Historically: The Hokies own an 11-6 all-time series lead, including seven straight from 1996 to 2002.

Baldwin the Eagle to HokieBird: Which former Atlanta Falcons No. 1 draft pick would you rather be, Michael Vick or Matt Ryan?

HokieBird to Baldwin the Eagle: What's it like to have head coaches walk out on you more often than John Daly's wives?

First, tell me why BC vs. Virginia Tech is one of the 10 hottest rivalries in college football. 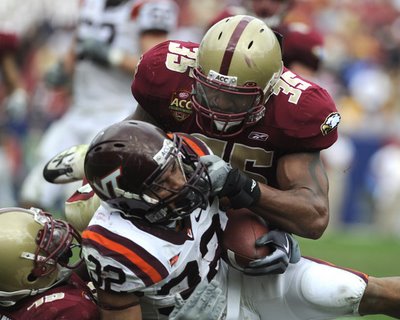 Jeff: Boston College vs. Virginia Tech is an easy pick for his list since he tried to not just pick historical rivalries, he tried to pick rivalries that have extra meaning this year. With BC beating Virginia Tech in the regular season two years running and VT still going on to win the conference and head to the Orange Bowl, the rivalry is as strong as it will ever be.

Brian: BC has indeed been a thorn in the Hokies side the last two regular season meetings. Familiarity certainly can breed hatred, and the Eagles and Hokies haven't seen each other 4 times in the last two seasons can certainly fuel a growing ACC rivalry.

Now tell me why Eagles vs. Hokies shouldn’t be listed as one of the hottest rivalries in college football.

Jeff: I wish these were the kinds of questions you were getting in your MBA class exams. This is too easy. BC-VT doesn't deserve to be on the list of all games around the nation this year because it isn't even the biggest game on BC's schedule.

Every fan would say Notre Dame is the #1 rivalry game this season and possibly list Florida State and Clemson as #2 and #3 because these games have ACC Atlantic division title implications. The rivalry is on the list because it is a matchup that has taken place in the last 2 regular seasons and been repeated in the ACC Championship Game. But it doesn't deserve to be on the list because the regular season result the last two has had no bearing on whether or not the team wins the ACC Football Championship, which is the big prize.

Brian: I'm going to disagree with you here. I wouldn't have BC vs. Notre Dame anywhere near this list of hot college football rivalries. I wouldn't put Eagles-Irish on this list for the same reason that USC vs. Notre Dame or Army vs. Navy doesn't make the list. The recent history of these series has been far too lopsided to even consider these games of any importance. Sure, Notre Dame may lead their cross-sectional rivalry with USC 42-33-5 all-time, but they haven't beat the Trojans in 7 tries. Same with the Army-Navy game, where the Cadets haven't beat the Midshipmen since 2001. Maybe Notre Dame will give us a game this year, but when one team beats the other for 6 or more consecutive games, I wouldn't put those games on any sort of "hot" rivalry list.

I could apply the same rationale to Boston College vs. Virginia Tech. As you mentioned, BC's last two regular season wins over the Hokies didn't have any effect on who ultimately won the conference. With the exception of the 2007 game where Ryan-to-Callendar possibly knocked the Hokies out of BCS National Championship Game consideration, the games the Eagles have taken out the Hokies didn't really have much effect on the other team's season. Before our ACC days, this rivalry didn't mean much, with Virginia Tech winning 8 of our first 11 matchups. It's only recently with the ACC's artificial rivalry games has this game taken on much more meaning.

Your thoughts overall on Forde’s list? Did he get it right? Your top ten?

Jeff: I do not think he got it right. I think Penn State-Ohio State is now the game in the Big Ten for the next few years rather than OSU-Michigan. I also think that the USC-Notre Dame game deserves a nod because of the BCS bowl talk for Notre Dmae this year. Another game that I'd take off the list is Georgia vs. Florida because there was a lot of hype entering the season for that game last year but this year is expected to be a down year for Georgia. Florida should steamroll their schedule en route to another national championship.

Brian: I would say that Forde got the #1 game correct. Last season's Red River Shootout was one of the best games in the entire season and was one of the games that determined one of the two BCS National Championship Game participants (with that game making it a three-way dead-heat atop the Big XII South regular season standings). That game this year could again determine who goes to the BCSNCG. Other than that though, Forde seems to focus on select off-the-field events to determine hot rivalries. In my opinion, UCLA taking out ads in the LA Times declaring that the football monopoly in L.A. is over, Lane Kiffin's whining about Urban Meyer or the war of words between A&M's Coach Sherman and Tech's Coach Leach seem petty and uninteresting. Ultimately, hot rivalries are developed on the field and not artificially manufactured by the press or by the coaching staffs. UCLA, Tennessee and Georgia (like you said) will ultimately get steamrolled yet again this season which renders these games irrelevant, and who cares about the pillow fight that is the Apple Cup outside of the state of Washington?

That being said, I present to you my list of the ten hottest rivalries for 2009. Spoiler alert: I do think BC vs. Virginia Tech should be on this list given how many times we've run into one another the past few years.

10. Pittsburgh at West Virginia (November 27) - shame on the Big East league office for not leaving the Backyard Brawl as the last Big East game of the season
9. Boston College at Virginia Tech (October 10) - Because two years ago Matt Ryan made Hokie fans question their believe in God. Also, this is a potential trap game for the Hokies as they look ahead to their trip to Atlanta the following week for what may ultimately decide who wins the ACC Coastal?
8. Texas Tech at Texas (September 19) - Harrell-to-Crabtree was THE play of the 2008 season. Tech no longer has the playmakers they had from a year ago, but can they once again derail the National Title hopes of Mack Brown & co.?
7. Oklahoma State at Oklahoma (November 28) - I'll make exception to my rule that the recent history between the two teams has to be competitive just once here, given that an already intense rivalry should be enhanced this year given the expectations around the 2009 Oklahoma State football team.
6. Penn State at Michigan State (November 21) - Last season, this was a matchup of ranked teams that saw PSU spank the Spartans. This year the game is in East Lansing and the winner of the Land Grant Trophy could also walk away with a share of the Big Ten crown, assuming Penn State can make up for the lack of an experienced offensive line.
5. Ohio State at Penn State (November 7) - This game has determined the Big Ten champ in each of the last two seasons. The all-time series is tied at 12.
4. Oregon State at Oregon (December 3) - Why would Forde pick an in-state Pac-10 rivalry that ultimately will have no meaning on the postseason? Why not instead put the Civil War on your list? All the Beavers needed to do was beat a hapless Oregon Ducks team at home to make their first Rose Bowl appearance since 1965. Instead, they got blugeoned 65-38. This game could again have Rose Bowl implications. This series has been as close as it can get the last 9 seasons, with OSU holding a slight 5-4 advantage.
3. Utah at BYU (November 28) - The Holy War may again determine whether a MWC team text/javascript" src="http://www.sbnation.com/javascripts/vendor/tiny_mce_3_0_7/themes/advanced/langs/en.js?v=307"> // --> is another BCS Crasher.
2. LSU at Mississippi (November 21) - The Rebels 31-13 win over LSU last season was the first win in the series in 6 tries. This game should have SEC West title implications.
1. Oklahoma vs. Texas (October 17) - the stakes for this year's Red River Rivalry will be as high as ever.

I'm selling Miami (FL) at Florida State until one of these teams is, you know, good again.