Brian: The big news over the weekend was that BC men’s basketball recruit Danny Lawhorn (Class of 2010) decommitted from BC via nearly every major social networking website known to man – Facebook and (your favorite) Twitter.

Lawhorn’s list of schools has been narrowed (?) to "Fordham, Arizona State, Texes A&M, UCLA, USC, Arizona, Organ State, Sout Carolina, Kentucky, Flordia, LSU, Mississippi State, Arkansas, UMass and UConn." No official announcement has been made by the school. Has this kid even talked to the coaching staff?

Sounds like it is time to update that MySpace graphic. 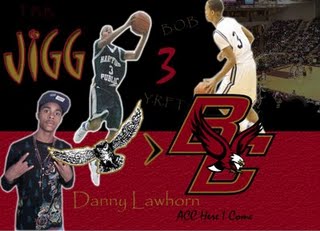 With PG recruit Lawhorn gone, that leaves only one recruit for the Class of 2010: Minnesota power forward Kevin Noreen. At the end of next season, we will lose senior Tyler Roche and go into the 2010-2011 season with 7 seniors on the roster (Paris, Raji, Trapani, Mosakowski, Sanders, Southern, Dunn). We currently have 11 on scholarship (with a max of 13 scholarship spots) and with Roche graduating and Noreen coming on, we will maintain 11 scholarship roster spots.

In your opinion, is Lawhorn a major loss to the recruiting class of 2010? Also, are you getting concerned that BC 1) doesn't have any recruits coming on board for this coming season and 2) the Eagles currently only have one recruit for the class of 2010?

Jeff: Lawhorn is not a major loss to our BC basketball's recruiting efforts. Recruits come and go and, like you said, we only lose Roche after this season. While it would be nice to have a couple good recruits included in the Class of 2010, it is not imperative until 2011. Unfortunately, this potential major problem we have for the 2011-12 season was created in the past by transfers and us having an extremely large class of 2011. The good news is that BC basketball fans get to be very optimistic about their basketball program as this class grows together. But the year after they leave will be a tough year for BC regardless of if we get one or two more recruits this year or not.

Brian: You have to be concerned about the class of 2011. I know Skinner likes to bank scholarships for future seasons, but Eagles fans only have to look back to recent history to see what happens when you are forced to sign a large number of incoming freshmen to fill the slots left by graduating seniors and transfers. See the drop off from 2006-2007 to 2007-2008 (-7 wins) when we had to replace ACC Player of the Year Jared Dudley, Sean Marshall, and Marquez Haynes (transfer to UT-Arlington). Sure, we should be excited about this coming season and next, but replacing 7+ seniors in the recruiting class of 2011 will be a tall, tall order for Skinner. My hope is the team picks up 1-2 more recruits for the class of 2010 so that we aren't scrambling to bring in so many players the following year.

Jeff: I'm not getting too worked up about this just yet. I don't get too worked up when recruits such as Joe Boisture or Danny Lawhorn decommit. Unfortunately, that is the reality of competing with the big boys. If you're a young football player that can go to nearly any program in the country, Boston College might not be your first choice. I would rather try to get those kids even though a smaller percentage might end up at BC than recruiting kids whose other option might be going to some MAC school. BC attracts kids that appreciate New England and want to be student-athletes, not just athletes. I'm fine with that and am willing to deal with the emotional speed bumps we hit as fans along the way.

The bright side for the basketball program is that at least freshman are more like to come in and produce right away in basketball compared to football. One or two stud recruits in 2011-2012 can quickly fill the large void that will be left in our program after so many players graduate after the 2010-11 season.