Belated Congratulations to the BC Penguins

Share All sharing options for: Belated Congratulations to the BC Penguins 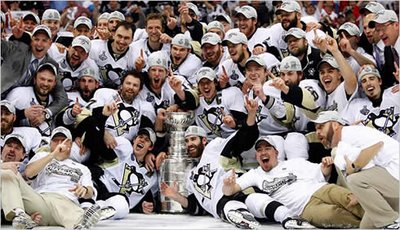 Brian: This happen while I was on blogcation, but I did want to congratulate the Pittsburgh Penguins on capturing the Stanley Cup in seven games over the defending champion Detroit Red Wings. BC alum Brooks Orpik and Rob Scuderi win their first Cup, while Bill Guerin wins his second cup but first since 1995. Also, Ben Lovejoy - who played a season for the Eagles before transferring to Dartmouth - will also get his name stenciled on the Cup. Penguins-Red Wings Game 7 was also the most watched NHL game in 36 years.

The College Hockey Blog runs through all the Penguin collegians.


Also, a while back I posed the question on our Twitter feed, but with the Cup win, Orpik and Scuderi join some elite company. I can't find any definitive list online, but how many players can say they have won both a Stanley Cup and an NCAA National Championship?

The only ones that I could come up with (with the help of the Twitterati) in recent memory are Neal Broten (Minnesota, NJ Devils), Chris Drury (BU, Colorado Avalanche), and BC's Brian Gionta (NJ Devils). Ryan Shannon was a year too late at BC.