Brian: ... and I'm back. I never want to see a cardboard box again, and there are still a ton of things to unpack, but of course one of the first things I did was set up my internet connection and catch up on all the Eagles news that I missed ...

We owed you a Big Finish from yesterday. Onward. 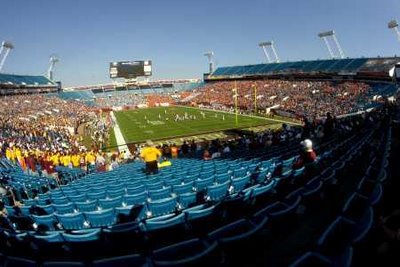 The 'Ship is going back to prime time, but will it help attendance?

One bit of ACC conference news that I missed is league's decision to move the Dr. Pepper ACC Football Championship back to prime time this season. This year's game will be played in Tampa on December 5, 2009 starting at 8pm. This will be the first time that the game will be played in primetime since the inaugural 2005 Football Championship. Commissioner ...


"We are pleased that the 2009 ACC Football Championship Game will be nationally televised by our partners at ESPN," said Swofford. "Prime-time exposure is always a plus and will be an excellent showcase for our divisional champions to compete for an ACC title and a BCS berth."

Jeff: I love the move. Everyone watching the game at home would rather make a night of it by having some friends over or heading to a bar to catch the game and it gives people more flexibility to get to Tampa this year. If you're driving, maybe you are close enough to leave Saturday morning or leave after work on Friday. If you have to fly, you can catch a flight Friday or Saturday up until mid-afternoon. No matter what time the game is Saturday, Sunday is a travel home day.

Brian: Eagle in Atlanta chimes in on the ACC Football Championship start time. I get what he is saying with the start time not being the issue in regard to attendance but I think he misses the lead.

Heather Dinich made this (great) point when Joe Paterno rekindled talks of Big Ten expansion and the Big Ten commissioner basically threw the ACC Championship Game's attendance figures under the bus. HD went to bat for the conference she blogs for and put the Big Ten commish in his place. She said that while the ACC Football Championship's attendance has lagged behind those figures of the Big XII and SEC's Championship Games, the game still generates over 6 million TV viewers ... viewers that aren't watching Big Ten Football that weekend.

I agree that the matchup is the #1 factor that will drive the ACCCG attendance figure, but what about those 6 million viewers? While ESPN/ABC's move to prime time might improve TV ratings, what if the SEC Championship - which is broadcast by CBS Sports - goes up head-to-head with the ACC Championship in the 8pm timeslot. And where does this move leave the Big XII Championship which is also broadcast by ESPN/ABC?

The ACC already has an inferiorty complex in regards to the SEC. If the ACC and SEC Championships go up against one another, think the ACC will still continue to average 6 million viewers then?

Jeff: Of course not, but that won't happen. People on the East coast are going to tune in to the SEC or ACC Football Championship over the Big XII while people in the middle of the country will do the opposite. Not many people were turning on their TVs at 1:00pm last year and watching straight through the end of the Oklahoma-Missouri game.

Brian: Last question, is this point moot? We certainly have had a tumultuous offseason. Do you expect the Eagles to even sniff an ACC Football Championship appearance?

Jeff: I still give them a chance. At this point we would have to catch some good breaks, but it is still a possibility to be back in Tampa. Also, I'm going whether BC or Clemson are in so it is not a moot point at all for me.

Brian: Did I really just say that HD made a great point above? Well while I was out, she also had this to say about the newest BC Eagle, Dave Shinskie:


Matt (Philadelphia): Is there a team in the Atlantic Division right now who you would say really has no chance of winning it? It seems to be a complete crapshoot.

Heather Dinich: It is anybody’s game, and that’s in both divisions. I thought BC would have the toughest time contending in the Atlantic, but Dave Shinskie could very well be the answer (seriously).


Huh? HD hasn't seen this guy throw a pass and suddenly he is the second-coming of Chris Weinke? Jeff, your thoughts?

Jeff: I kinda agree with her. We knew what Davis gave us and we knew no one else on the roster seemed to be able to beat him out. Shinskie is no guarantee, but you can't pass judgment on him yet as you could with say, Codi Boek, who was switched to fullback last year. We know he's at least good enough to take up a scholarship.


Jeff: The ACC's two final representatives in the College World Series - North Carolina and Virginia - have been bounced from the Series. What's up with that?

Brian: No idea. Certainly a disappointment for the conference after getting a record 7 teams into the field of 64.

Jeff: Uh, sure. Long time assistants deserve some love every once in a while.


Jeff: The city of Boston finally signed off on BC's expansion plan. Your thoughts?

Brian: Given this month's baseball NCAA tournament excitement, I am most happy for the baseball and softball teams getting a legitimate ballpark.


Brian: College Game Balls has his list of twenty offseason questions for ACC football. For BC, he asks "Can Boston College overcome the loss of ACC Defensive Player of the Year Mark Herzlich, departure of Dominique Davis and compete for another Atlantic Division Championship?" Jeff, your response?

Jeff: Losing Dominique Davis is not an issue because we were hoping that someone else would beat him out anyway. The loss of Herzlich, however, may be too great to overcome.


Jeff: Andy Katz reports that BC approached Pitt to play in the men's basketball Jimmy V Classic this December. Pitt declined. BC is also talking to 'Nova to schedule an out of conference bball matchup. Which team would you rather see the men's hoops team schedule - Pitt or Nova?

Brian: Nova ... by a mile. Villanova is a much better fit in terms of the type of school (small, private Catholic school) and there are many more alum in the Philadelphia area than there are in Pittsburgh.