What Could Have Been ...

Share All sharing options for: What Could Have Been ...

You can use this site to answer the following questions ...

Could the 2007 Eagles with Matt Ryan under center have taken down the BCS champion Florida Gators? 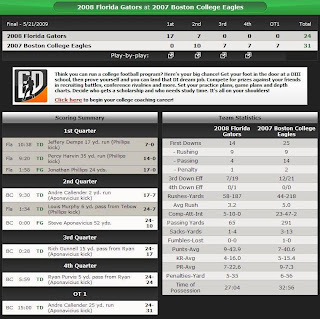 
And finally, did BC miss it by a year in terms of winning the ACC Championship Game? In other words, could the 2007 Eagles squad have run the ACC gauntlet and won the ACC and the Orange Bowl against our 2008 schedule?

The Eagles 9-3, 5-3 ACC record is good enough to place the Eagles in a four-way tie atop the Atlantic Division standings with Florida State, Clemson and Wake Forest. However, Wake finishes 3-0 against the other three teams atop the division and represents the Atlantic in the ACC Championship Game. Wake Forest proves too much for the Hokies and rolls in the ACCCG 23-3 in front of 7 fans. Wake Forest then goes onto crush Cincinnati in the Orange Bowl 41-3, stopping the ACC's eight game BCS losing streak and giving the ACC football a shred of respectability.

Since there was a four way tie at the top of the Atlantic Division, the 2007 Eagles are shipped off to Boise and crush a 2008 Nevada team on the blue turf, 38-3.

But hey, at least we beat Notre Dame by 36 points at home, right?

Thanks to JB for the link.


Have any interesting and/or painful simulations?