Role Play: A Spaz Guarantee?, Soring to Glory, and So Long Fenway?

Share All sharing options for: Role Play: A Spaz Guarantee?, Soring to Glory, and So Long Fenway?


Brian: Jeff, you are head football coach Frank Spaziani. Who you got at starting quarterback? Show your hand. 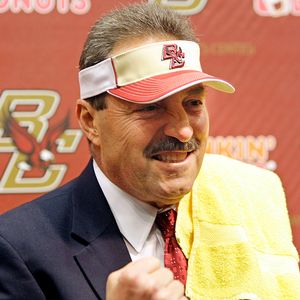 Jeff as Coach Spaz: To no one's surprise, Dominique Davis will be our starting quarterback when we start play in the fall. He will not see every snap but he will start. Regardless of who is at quarterback, our defense will be awesome and we will win lots of games.

Brian: Follow up question: BC Guy Kevin Armstrong gave you the SI royal treatment yesterday. Any truth to the rumor that you are going to power BC to four wins next season on the power of your magical stache alone?

Jeff as Coach Spaz: We'll find out, but BC is good for 8 or 9 wins without the stache so if it is true, which I hope it is, we're in for something really special next season. 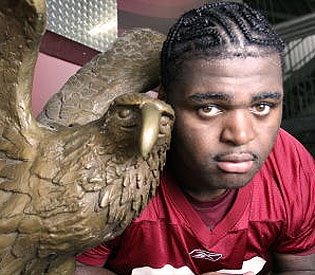 Brian as BJ Raji: Thats for me to know and for you to find out. Maybe I was trying to be funny Jeff. Did that thought ever occur to you? Perhaps I have a budding career as the new funneyman of the NFL like my boy Shaq. I know I've had my fare share of troubles in the past - smoking weed in college, academic ineligibility, almost smoking weed at the Combine - but this one I could care less about. So what that a bunch of bloggers are poking fun at me about this. I'm a soon to be multi-millionaire.

I'll tell you one person who is happy about my spelling mistake - the seller. The item is up to $180 now! That's me giving back to the communeity.


Brian: Jeff, you are Al Skinner. The Eagles are set to play in the 2009 USVI Paradise Jam. (You can't seem to avoid Purdue in these early season tournaments.) How your Eagles going to fare this year in the tournament? 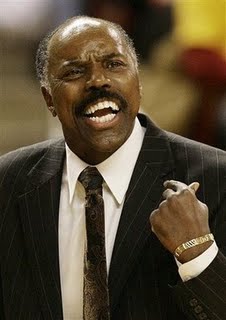 Jeff as Al Skinner: Yes, we might get to face Purdue again next season. It will be a tough game for us if we do but I really hope that we get a game against Tennessee so that I can beat Bruce Pearl before he succeeds me as BC's head coach as you guys like to talk about.


Jeff: Brian, you are BC athletic director Gene DeFilippo. You at all upset over the fact that the conference passed over historic Fenway Park in favor of the slightly less prestigious NewBridge Bank Park in Greensboro, NC? 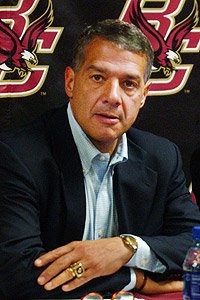 Brian as GDF: Upset? Yea I'm upset. First the ACC Championship is moved from Boston to Durham this year because of a Fenway Sports Group scheduling conflict. What am I paying these guys for? To conveniently forget about my college athletics program and have them instead worry about the Red Sox?

Then the commissioner yanks the 2010 tournament away from the city citing the economy? What an excuse. Cut down on travel costs? Greensboro, NC may be central to 5 ACC schools, but if you look at this year's standings, 3 of those 5 schools aren't even going to qualify for the Championship (Virginia Tech, Wake Forest, NC State) and a fourth (Duke) is barely hanging onto one of the last spots. BC is going to have to travel to the championship. What about our travel expenses? So are Florida State, Miami, Georgia Tech and Maryland. Not to mention it costs just as much, if not more, to fly to small North Carolina airports as it does to fly into a major city like Boston.

I thought the conference brought us in to expand their reach and enter the Boston sports market?

You may be wondering why I'm so upset about this in a sport as insignificant to BC as college baseball, but I think this is sending the larger message to Boston College that the city of Boston will never host an ACC championship in any of these sports. The commissioner and the balance of power in the conference is in North Carolina, and the commish and the league brass would rather do what's convenient for them than reward some of these college ballplayers with a once-in-a-lifetime experience of playing in Fenway Park. BC will just stick to hosting Hockey East, Frozen Four and national sailing competitions - sports we actually have a chance of winning a national championship in and conferences that actually care about us. Also, I hear that old man Paterno is ruffling some feathers about Big Ten expansion. Maybe I should give him a call and see if they are interested in BC?


Brian: Last one. Jeff, you are ACC commissioner and BCS coordinator John Swofford. Congress wants to know, Why was the attendance down in the ACC championship last year? 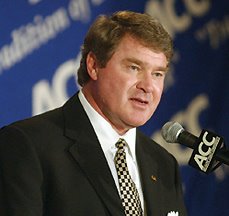 Jeff as John Swofford: So are you going to give me some time to answer the question this time? With the game being held in Tampa, Florida State, Miami, Georgia Tech and Clemson are the teams whose fan bases would be most likely to fill the stands because of georgraphic location. None of thos teams made it last year and instead two of our four northernmost schools represented the league in the Championship Game. To make matters worse, the game was a rematch of not only a regular season game, but also the previous season's game. Add in the economy and you have a perfect storm for bad attendance. Can you get off my back about ACCCG attendance, Brian? It moves to Charlotte in 2010, happy!!??