What do the NCAA baseball regionals, Dabo Swinney and football in Fenway Park have in common? Absolutely nothing. But we touch on all three topics in a game of oddsmakers.


Chances BC advances to the NCAA baseball Super Regionals?

Brian: The breadth of Jeff and my college baseball knowledge is certainly limited, as is well documented on the blog. However, for whatever reason, I am feeling overly optimistic about the Eagles chances in Austin. The Eagles used a 17 run outburst last Friday and Saturday to tally a very respectable 2-1 record in the ACC Championship. I am thinking that the Eagles can use this momentum to beat Texas State in the opening game. The pitching lately has been great too, with Dean and MacDonald pitching great games against Miami and Georgia Tech in the ACC Championship.

While Texas State did finish the year at 38-14, when it came to playing the big name baseball teams, they have a mix of impressive wins - 2 at Baylor, 1 at Rice - and bad losses - 2 losses to TCU, 2 losses to Texas. Not sure what to make of this. Texas State does have an ace on their staff - Kane Holbrooks (10-1, 3.34 ERA) - so it will be interesting to see if the Eagles have to face Holbrooks or if they will save him for a possible matchup with Texas.

I really don't think much of Army's chances to run the gauntlet of Texas, Texas State and BC.

After the Longhorns, I'll say the Eagles have the next highest chance of advancing to the Super regionals. I'll give UT a 55% chance to advance, the Eagles a 25% chance, the Bobcats a 19% chance, and the Black Knights a 1% chance. 25%.

Jeff: At least you prefaced your answer by saying that you know nothing about college baseball. I am not claiming to know much but I have a least watched a few games this year which is more than you can say. Since we're handicapping the whole regional, here's how it goes.

Army has no chance whatsoever. Texas is probably going to advance easily. I'd love to see BC advance but they have far worse than a 1 in 4 chance.

Jeff: A month ago, this was a no-brainer and BC was the heavy favorite. I know Clemson has CJ Spiller back and BC has quarterback issues, but I will continue to stress that aside from the quarterback and defensive tackle positiosn, the Eagles have a really, really strong team. Now with Herzlich out of the starting lineup until further notice and when you give Clemson a few extra percentage points since we have to travel to South Carolina in September, it becomes closer to a 50-50. To set my final number though I look at each coach's all-time winning percentage as head coaches and I give Spaz the advantage since he is batting 1.000. Final answer. 39% chance that Swinney finishes ahead of Spaz this year.

Brian: I am going to throw out the quarterback issue you mentioned because Clemson is just as unsettled as the Eagles are at the QB position. Of course, you wouldn't know this if you read this HD fluff piece on backup QBs, but I digress.

Expectations will certainly be low both in Clemson and Chestnut Hill this fall. I tend to agree with you, Jeff, that even with the loss of Herzlich, BC is the more complete team going into next season. I think when you boil it down, the chances that Swinney has a better record than Spaz at the end of the year depend greatly on the Tigers and Eagles schedules.

Comparing out of conference schedules, Northeastern/Kent State and Middle Tennessee State/Coastal Carolina seems to me to be a wash, and I'd put both the Eagles and Tigers at 2-0 after these games. Although I would say TCU/at South Carolina is a tougher pair of out of conference games than Central Michigan/at Notre Dame. TCU is considered by some to be a preseason Top 25 team, and you have to think this year is as good a chance as any for Spurrier to bring the Carolina-Clemson rivalry a little closer to .500 since he arrived. Advantage: Eagles.

If you then consider each team's respective ACC slates, the advantage has to go again to BC. This season, both teams miss Duke, Clemson misses North Carolina and Virginia Tech while the Eagles miss Georgia Tech and Miami. Perhaps this is a wash, maybe a slight edge to BC. But when you look at the road sched, this seems to favor the Eagles, as the Tigers travel to Georgia Tech, Miami and NC State. The Eagles' toughest road test will come on October 10 in Blacksburg, but the road trips to Charlottesville and College Park don't seem as daunting as running the Atlanta/Miami/Raleigh gauntlet. Especially with all those high expectations in Raleigh.

After dissecting both the Eagles and Tigers 11 other matchups, I honestly think this will come down to the head-to-head matchup on September 19. Since the game is in Death Valley this year, I'll give the slight, slight edge to Clemson and say Swinney has a 50.1% chance of ending the season with a better record than Spaziani. 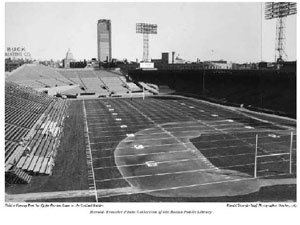 Last one, chances BC football plays at Fenway Park any time soon?

Brian: The reason this is a question is recently ESPN.com's Ivan Maisel came up with a list of old college football foes playing in old venues and suggested Fenway Park with BC facing Auburn. Auburn was selected as BC's opponent since the other 5 teams we played games against at Fenway - Boston U, Georgetown, Holy Cross, Temple, and Idaho - either de-emphasized football, dropped down to FCS or straight up suck. The Auburn blog Track 'Em Tigers even goes as far to suggest that BC and Auburn should be paired together as part of a larger SEC-ACC rivalry series. Having been to Jordan-Hare Stadium last season, I really like this idea. Well played, Track 'Em Tigers.

While I would love to see BC play football at Fenway Park, I don't think we'll see this happen anytime soon. I just can't imagine Gene and the Athletics Department offering to play a BCS conference opponent in a venue that seats less fans than Alumni Stadium and one in which would likely have ungodly sight line issues for football.

Sitting on top of the Green Monster and watching a football game = awesome
Sitting in the last rows behind home plate, as far away to the action as possible = not so awesome.

Not to mention the fact that if Gene and the AD continue to slavishly follow our established out of conference formula from the last four years (1 parts BCS, 2 parts non-BCS FBS, and 1 part FCS) going forward, I can't imagine a team like Southern Cal, Syracuse or Northwestern agreeing to playing at Fenway instead of Alumni Stadium. If BC is going to play a home game off-campus, this game will likely end up at Gillette Stadium in Foxboro before it ever ends up at Fenway. The athletics department would want to increase the number of seats available, not decrease the total number.

Finally, with the Red Sox actually being good again, there's no telling whether they will still be playing come October. And I can't imagine the Sox or FSG getting excited for a college football team tearing up the diamond and grass. I will go VERY low on this and say 5% chance.

Jeff: This is somewhat of a stupid question because it says anytime soon. The answer is 0%. If anytime soon actually means the next 20 years, then there's a decent chance.

I think every BC hockey fan has said to themselves at one point or another that BC and BU should play at Fenway after some other schools have played similar rivalry games in large outdoor venues. I think this will happen at some point and the date will probably be set in the next 5 years.

After that, if everyone agrees that was a huge success, then you have a strong possibility of a Thanksgiving weekend football game, i.e. BC vs. Syracuse, being played at Fenway, but at that point we're probably already well into the 2020s. Will Fenway still be around?