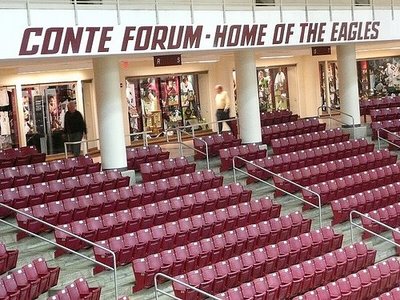 Brian: I just read this TimesUnion.com blog post about how Siena men's basketball team placed 72nd nationally in men's basketball average attendance last season, according to an annual report produced by the NCAA office. The article goes on to state how Siena topped the average attendance of many major power conference schools, including Georgia Tech, Seton Hall, Stanford, Georgia, Mississippi, USC and Boston College. But just how bad was it last season for the Eagles?

Jeff, I know we play in the second smallest arena in the ACC (ahead of only Miami's BankUnited Center with a capacity of 7,900), but are you a bit surprised in these numbers given that the men's team got back to the NCAA tournament and hosted a #3 ranked Wake Forest team, a #11 ranked Clemson team and a #5 ranked Duke team at home this season?

Jeff: Brian, I am not surprised even a little bit. We talked at length about how poor attendance was this year and when you watched other ACC games on TV you rarely saw the same number of empty seats compared to Conte. There often seems to be a one year lag in attendance relative to what the team accomplished so hopefully next year will be better and I would bet money that Maryland's attendance, for example, will drop.

Brian: What, if anything, can be done to get attendance back up over the next couple of years?

Jeff: Well, first, where do you think BC should be on this list? I mean, seven schools averaged higher per-game attendance than Conte's capacity. BC should maybe be able to push 7,000 per game but that is about as good as it will ever get because they might pack the house for all ACC games, but some of those out of conference games will always be played in front of 3,000 or so. Last season was bad, but it was probably mostly due to the previous year's sub .500 season. I would love to see fewer season ticket packages sold and half season packages offered instead because I think if you have tickets to fewer games you would be more inclined to attend each one. However, I don't anticipate that happening.

Brian: I realize that BC is certainly constrained by having one of the smallest arenas in the Conference, and it's basically a glorified hockey rink at that. But to control for differences in the size of the conference's various arenas, I thought it would be interesting to look at the attendance % filled. I wasn't as disappointed with the turnout in terms of raw numbers, but was pretty disappointed when you look at BC's average attendance % filled.

The 64% was better than only Miami, an ACC program without much basketball history to speak of. Teams that had mediocre to downright bad years this year, like Virginia (4-12) or Georgia Tech (2-14), outdrew BC by quite a bit in terms of filling their home arenas. This might have something to do with the proximity to other schools or capacity rates may lag behind by a few years as you suggested.

Not sure if its a ticket pricing issue, a reworking of the student ticket policies, or a strengthening of our out of conference schedule, but I only hope that over the next few years we can get the capacity of Conte up to be more competitive with the rest of the conference.

Jeff: Let me reiterate that I strongly believe that Georgia Tech and Virginia will feel the effects of this year's season in next year's attendance just as we paid this year for last season. Next year will be better for Boston College regardless of any changes to prices or policies.

Brian: Not so sure that Georgia Tech or Virginia will see drop offs in attendance if this guy or this guy have anything to say about it.