Food Chain: Most Indispensable Eagles for the 2009 Football Season

Share All sharing options for: Food Chain: Most Indispensable Eagles for the 2009 Football Season

Brian: As spring football is now in our rear view mirror, we begin to look ahead as to what 2009 has in store for the BC Eagles football team.

Today we play a game of food chain that asks the question, Who is the most indispensable Eagle on the team next season?

Food Chain: Top 5 Most Indispensable Eagles for the 2009 Football Season

We consider these 9 Eagles and each rank our top 5 in terms of being the most indispensable to the success of the BC Eagles in 2009. Then we ask you to chime in in the comments section. 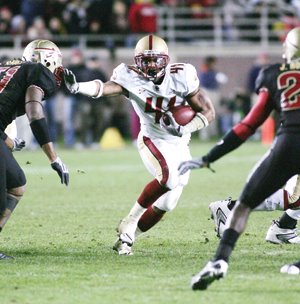 Montel Harris
Last year, the freshman broke the BC freshman rushing record with 900 yards on the ground. He played with a chip on his shoulder and was a beast in his homecoming at Florida State (25 carries, 121 yards and a TD). If the Eagles offense is to be successful next season, we'll need Harris to duplicate or best his efforts from freshman year.


Dominique Davis OR Justin Tuggle OR Codi Boek
Do the Eagles have an indispensable QB on the roster? Will Davis get the nod? The quarterback position will be arguably the most important position on the Eagles roster in 2009. With a new offensive coordinator and a more up-tempo pace to the game, we'll need a capable field general to move the offense. But without knowing who the starter is, can any of these three really be considered to be 'indispensable'?


Frank Spaziani
The Eagles head coach provides what little consistency the Eagles will carry over from the 2008 season. New offensive coordinator, new defensive coordinator, new offensive skill position coaches. It will be on Spaziani to keep the team focused, especially with one of the teams key returners likely being unavailable. Herzlich's news can have a profound effect on the psyche of this team, and the Eagles will look from leadership from the top to keep it all together.


Damik Scafe
Of course, one of the key losses to the defense is losing both Ron Brace and BJ Raji to graduation and the NFL Draft. It's certainly not easy to replace 647 pounds of running-stopping goodness up the middle, but Damik Scafe will try to do just that. Scafe is sort of an unproven commodity so far, having played behind Brace and Raji in 2007 and 2008, so there is some hesitancy as to how indispensable he is as a player. No question, however, that we'll need solid contributions from our DTs if we are to have a successful season. 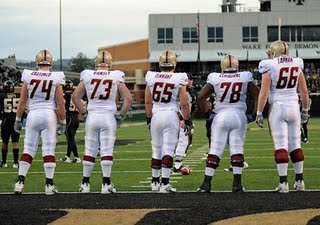 Anthony Castonzo
I don't think anything more needs to be said about the importance to Castonzo other than this line from his BCEagles.com player bio: "First true freshman to start on the BC offensive line in 10 years." Last season, he made the move from RT to LT and has started all 28 games in his two years with the Eagles. Castonzo adds consistency to our offensive line at the most important position on the line. At least, so says Michael Lewis in his book The Blind Side.


Mike McLaughlin
McLaughlin tops HD's list of players BC needs to make a comeback this fall. I would agree with her. McLaughlin is still very much a question as to whether he can return to form this fall after suffering an Achilles injury, but with Herzlich most likely not available in 2009, the Eagles linebacking corps will need a leader to step up and take charge.


Matt Tennant
Tennant is probably the second or third biggest injured Eagle question mark this offseason as he tries to recover from having Tommy John surgery. Should Tennant make a full recovery, he will likely be our starting center on the offensive line. Tennant and Castonzo are the two most tenured returning offensive linemen, as we'll certainly need that experience on the O Line given that we are breaking in yet another offensive playbook and possibly a new starting QB. 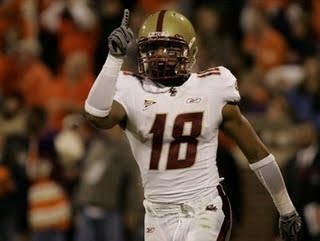 Rich Gunnell
Gunnell led the receiving corp with 49 catches and 4 TDs last season. He returns for his senior year as the #1 option at wide out. With the status of Clarence Megwa still up in the air, and the loss of Purvis to graduation, we'll need Gunnell to step up and be the #1 target for our starting QB.


Josh Haden
It's easy to forget about Haden given Montel Harris's success last season, but expect to see Haden more involved in the offense this year - especially the passing game - coming out of the backfield. Think: Andre Callendar. Haden was part of the second-best running back tandem in the country last season, and I would expect Haden to build on his 579 yards of total offense from his freshman year.

5. Damik Scafe - two reasons why he isn't higher on this list ... A) not nearly as worried about the defense as I am about the offense and B) hard to say someone is indispensible when they have seen very limited time on the field the last two seasons
4. Montel Harris - I actually expect to see Josh Haden get more involved in the offense this season, so Harris is no higher on 4th on my list given that I think we have two equally capable backs on the roster.
3. Mike McLaughlin - if he's available, we'll need a leader in the linebacking corps. If McLaughlin can't go, I'd throw Gunnell in at #3. That is assuming, of course, that someone can get him the ball.
2. Anthony Castonzo - it's the second most important position on the football field, behind only QB. Again, didn't you read The Blind Side?
1. Dominique Davis - or Tuggle, or Boek, your preference. Regardless of who it is, we will only go as far as our QB will take us next season. We saw what happens when you throw the backup to the fire last season (see: Davis' best deer-in-the-headlights impression from the Wake Forest game). I'll assume here that Davis is the starter, but if he's not, my #1 vote goes to [INSERT STARTING QB HERE] as the most indispensable Eagle next season.

5. Damik Scafe - after losing Brace and Raji, we don't need to lose another DT to injury or for any other reason
4. Matt Tennant - if he reinjures his elbow and the O Line needs to be shuffled around, we are in trouble since the passing game is likely to be suspect
3. Mike McLaughlin - with Herzlich potentially out for part or all of the season, we can't lose another linebacker even though we are typically deep at that position. Get well soon!
2. Montel Harris - with a heavy dose of running expected this year, we need all three backs healthy whenever possible but if one in particular can't go down, it's Harris
1. Frank Spaziani - he's the glue holding everything together with lots of new faces on the coaching staff and Herzlich's tough luck


Jeff: We don't have an indispensable QB on the roster, Brian.

Jeff: I thought about him but went with our starting center.