Share All sharing options for: A Closer Look at Historical Men's Hoops Attendance

Brian: I alluded to this earlier today in the comments section from yesterday's post. Using the NCAA's website, here's a closer look at Boston College men's hoop attendance going back to 1992-1993.


Or in colorful graph format: 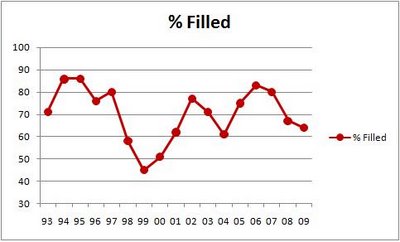 First, know that Jeff and my perspective is from 2000 on, ever since we were Newton Campus freshmen. When we were freshmen, anyone who wanted student season tickets got season tickets. Men's hoops was basically off the radar in the consciousness of Superfans, as the Eagles were coming off 6-21 and 11-19 seasons.

So the million dollar question is why the drop off in attendance, particular from the 2005-2006 season to the present.

A good friend's dad - who put two kids through BC - wrote us today to say that he was convinced that the primary reason for the low turnout is that students can no longer get access to student tickets. We are told for the past three seasons, some students that want a full student ticket package aren't able to get the full season and instead half to settle for 1/2 season packages, or in some cases, no tickets at all. Now I have no doubt that students can find creative ways of getting tickets to games that they don't have tickets for, but don't discount the effect that these new, more exclusionary ticketing policies have on students in terms of losing interesting in support a team.

While I agree that the changes in student ticketing policies may be a factor, I don't think this tells the whole story. I think there are several factors at play in the declining per-game attendance numbers since 2005-2006.

Jeff might have been onto something when he suggested attendance lags behind the team's success by 1-2 years. While not 100% correlated, take a look at the previous year's records in the years where we had the highest % filled.

This seems to tell part of the story, but I'm still baffled by the 13% drop off between the 06-07 and 07-08 seasons. Perhaps the current season's team record has much, if not more, influence on attendance than the previous season's record. That year, the Eagles stumbled to a 14-17 finish, good for last place in the ACC. And at times, it felt like they were losing every ACC game they played (two 6 game losing streaks).

Some other considerations for the drop off in attendance:
All valid reasons for the decline in per-game attendance. If hard-pressed to pick one, however, I would point to one that has previously gone unmentioned.

Take a look at the number of home games played over the past 17 years. In the last 3 seasons, we have played 18, 19 and 19 home games - the most number of home games over that span (and likely the highest number of home games in one year in program history). As the number of ACC home games is fixed every year, that means that those additional games are against the Bryants and SC-Upstates of Division I. Those aren't particularly interesting draws. Add to this the fact that we refuse to schedule some of our former Big East rivals like UConn, Georgetown and Syracuse in basketball. We certainly have a justifiable reason for not scheduling these teams, but this cuts down on the number of local, high-profile out of conference matchups the Eagles can schedule.

My fear is that with an increasing number of home games per season, is the Athletics Department even focused on the issue of average per-game attendance? More home games means more revenue potential, and at the end of the day, does it really matter how many fans we draw for a December 31 game against Sacred Heart?

After all, the AD and the department are judged on dollars and cents, not butts in seats.

Your turn. Having seen the historical data, what's the reason that the Eagles men's basketball per-game attendance has steadily decreased over the last 4 seasons?