Share All sharing options for: ACC Baseball Championship Update and the Big Finish 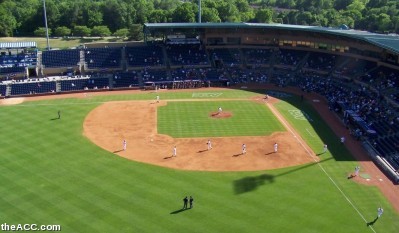 Jeff: Brian, have you watched any of the ACC baseball tournament? Even though every seat has not been filled, it looks like there is decent fan support by NCAA baseball standards.

Brian: I've been following the action on Gamecasts so I can't really speak to how attendance has been at the ACC baseball championship. From the box scores, I can see that 1,518 were in attendance against Florida State and 1,194 watched the Eagles and Yellow Jackets yesterday. Is this a good draw? Bad draw? I have no idea. We're still new at this "our baseball team is now decent" thing.

Jeff: And how dumb is this tournament format? There are still two more days of round-robin play and Florida State has already clinched a spot in the finals.

Brian: Florida State had advanced to the Championship game out of Division A before Virginia and Clemson played their first of three games of the round-robin format. That is, indeed, crazy. That is going to happen every once in a while with this sort of format. It happens every so often in the FIFA World Cup too. This definitely gives FSU an advantage in the championship game as they can rest their starters in their game on Saturday vs. Georgia Tech and wait to see who comes out of Division B.

Overall though, I would say I prefer this tournament format to a single elimination or a double-elimination format. Participating teams are guaranteed three games and that can sometimes help out a team's NCAA tournament resume a great deal. That's exactly what has happened with BC. The Eagles actually rose in the RPI after their 7-2 loss to Florida State, and our RPI rose again today after the win over Georgia Tech. We are currently at #33, which should be good enough to get into the NCAAs.

Kendall Rogers of Yahoo! Sports has us as a tournament lock at this point and heaps on some praise for the BC baseball team. The College Baseball Blog's latest NCAA tournament projections have the Eagles as a #3 seed in the Oxford, MS regional. with Mississippi, Elon and Army.

Good luck to the Eagles today as they face Miami at noon.

Brian: This The Times West Virginian article discusses the possibility of Big Ten and Big East expansion, and mentions BC as a possible school for the Big East to scoop up to bring the number of teams back to 9. Yeah, right. Anyway, which will happen first - Big Ten expansion to 12 or Big East football expansion to 9?

Jeff: The Big East will expand. The Big Ten might never.


Jeff: Former BC standout Vinny Ciurciu returns to New England having signed with the Patriots. Will he make an impact on the team?

Brian: I hope he can be a solid contributor on special teams. Always have to root for former BC players. And Jeff, you must be especially rooting for him since he started his college career at Clemson before transferring to BC.


Brian: BC QB football recruit Joe Boisture competed in the Midwest Elite Camp last weekend and showed the "best overall passing ability" at the camp. Thanks to ACC Sports Journal for the link. You getting excited about the arrival of Boisture in 2010?

Jeff: Not really. I am not crowning him the future of BC QBs. It's way too easy to get overly exctied about recruits.


Jeff: The NAACP is not happy with the ACC rewarding the baseball tournament to South Carolina. Your thoughts?

Brian: I get that South Carolina is a central location for the conference to hold its baseball tournament, but I am more than curious as to why the ACC decided to break with the NCAA on this issue. Unfortunately, I don't think this is the last we'll hear on the issue.


Brian: College Game Balls takes a look at each BCS conference's 2009 out of conference strength of schedule and declares the ACC the weakest of the six. Although CGB uses a highly suspect mathematical equation, if this is indeed true, how disappointed are you in the ACC?

Jeff: I'm not disappointed with the ACC. The ACC needs to avoid marquee blowouts like Alabama-Clemson last year and LSU-Virginia Tech the year before.


Jeff: Here's an early look at the 2009 ESPN/ABC college football broadcast schedule. Not one BC game on the list. You surprised?

Brian: Not really. Maybe a tiny bit surprised that Florida State at Boston College didn't get picked up, but expectations are low for next season. At least Comcast finally picked up ESPNU.


Brian: To mark the occasion of Michael Vick being released from prison, Dr. Saturday gives us a Vick article. In said article, there is this highlight reel of Vick at Virginia Tech which came - of course - against Boston College.

Remember this performance, Jeff? I believe we were both in attendance. Bad memories. Can you remember a more dominant performance by an opposing player in Alumni Stadium?

Jeff: No, he was the man that day.


Brian: Last one, INCH wants the Frozen Four back in Boston after the 2012 season. I'll second that. What other cities would you like to throw back into the Frozen Four rotation?

Jeff: I might make the trip when its in Tampa if Boston College is there. I'd also go to Atlanta if it were there.