Share All sharing options for: Winter Classic Coming to Boston?

From the Herald, Ice is nice at Fenway for Bruins ...

Don’t breathe a word of this. Because nobody’s supposed to know. But the Boston Bruins will host the NHL’s Winter Classic outdoor hockey game against an unnamed opponent Jan. 1 at Fenway Park!

Our spies on Lansdowne Street say the League has given its blessing to a 2010 New Year’s Day game in the Hub of Hockey, choosing Boston over New York and Philadelphia.

League reps had visited all three cities and, in Boston, looked at both Fenway and Gillette Stadium . However, scheduling around any Patriots post-season play was a tricky proposition, we’re told, and ultimately Fenway got the nod. 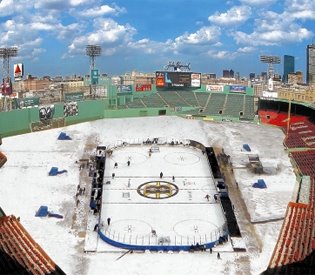 I say forget the Bruins ... how about Boston College vs. Boston University hockey at Fenway Park?