The NCAA Falling In Love with Football Stadiums?

Share All sharing options for: The NCAA Falling In Love with Football Stadiums? 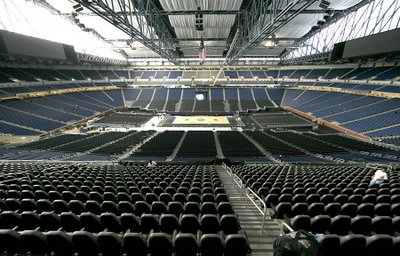 Brian: It's official. The NCAA is falling in love with hosting tournament games in football stadiums.

I don't think it started with this game but I certainly took notice of this fact back at the beginning of the college hoops season when North Carolina spanked Michigan State at Ford Field. Did you happen to notice all those empty seats at these NCAA tournament sites? Did you even realize that they were held at football stadiums?
But why stop there? Check out the sites for the Final Four through 2016:
Seems sort of crazy to have these games in these venues when a) you can't possibly sell out the place b) I can't imagine you can create a great game atmosphere and c) in some of the cheap seats it must be really, really tough to follow the action. The East Regional final between Pittsburgh and Villanova was a college basketball game for the ages, yet I'm told local Bostonians could have gotten to the final by purchasing relatively cheap tickets the day of the game. And the TD Banknorth Garden can't hold more than 19,000 people for hoops.

Jeff, do you like this new trend, or would you rather have college hoops biggest stage played in ... well, basketball arenas?

Jeff: I love the trend. Absolutely love it. The game between Michigan State and North Carolina earlier this year was probably a disapointment attendance wise but for the Final Four 72,000 are expected. I think that is awesome. Also, recall when Michigan State played Kentucky at Ford Field I believe in 2006 and they set the record which still stands for basketball game attendance.

You seem to be critical of this trend having never been to a game in a dome. I attended the ACC tournament this year at the Georgia Dome and it blew away my experience at the Bobcats arena in Charlotte last year.

Jeff: Well, one regional final site every year is the following year's Final Four site so that the host site can iron out any problems before they become the stage for one of the biggest events in sports.

Brian: Not only has college basketball caught the football stadium bug, but college hockey is starting to follow suit. The 2010 Frozen Four will be held at Ford Field in Detroit. Capacity 70,000. To make matters worse, they will be placing the rink in the middle of the stadium. I will be shocked if they can get more than 50,000 fans to a Frozen Four, even if Michigan or Michigan State is in the final four. What they should have done is placed the rink at one end of the stadium and curtained off half the field. Guaranteed this will be a decision the NCAA either regrets or looks back on after they start selling tickets for the event. Jeff, do you like this trend catching on for college hockey's biggest stage?

Jeff: Hockey I am not so sure about. A Final Four for basketball is going to sell out the Rose Bowl if they could have it there. College hockey, not so much.

Brian: Sell out the Rose Bowl? Seems a bit of a stretch but I'll take your word for it.