A Look at First-Year Coaching Success and the Big Finish

Share All sharing options for: A Look at First-Year Coaching Success and the Big Finish

Jeff: Brian, I call today Masters Friday. Do you know what the Masters is?

Brian: Don't you mean Good Friday? And yes, I know what the Masters is, thank you very much.

Here is a look back at each of BC's head football coaches performances in their first season at the helm. The results are not pretty.

These results are not particularly encouraging for Frank Spaziani in his first year as head coach at the Heights. Jeff, please tell me why I shouldn't be discouraged by our recent history and should expect good things (a.k.a. a winning record) from the Eagles in 2009?

Jeff: You shouldn't be discouraged because our most recent history includes Jagodzinski compiling one of the greatest seasons in the history of BC football. If Jags could do that, Spaz can at least have a winning record. Also look at the personnel he has returning with our two young running backs and a spectacular defense including the reigning ACC Defensive POY.

Jeff: I would think so. Defense is Spaziani's specialty so I would expect the Eagles to have a strong, strong defense for years to come.

Brian: I am cautiously optimistic that the Eagles will have another winning season next year. The team has a lot of work to get better on offense and on special teams this summer before I feel more comfortable.

Still, the schedule sets up somewhat favorably for the Eagles next year. BC is likely to win 3 or all 4 of their out of conference games (Northeastern, Kent State, Central Michigan, at Notre Dame) and then the team only needs a couple of ACC victories to push them to 7 wins. The most likely candidates being at Virginia (also breaking in a new offense), North Carolina (retooling after losing several offensive playmakers) and at Maryland (always seem to find a way to beat the Terps) - all at the end of the season. Clemson will take a step back, and we get the tougher ACC Atlantic teams - Wake Forest, Florida State and NC State - all at home.

Here's hoping that Spaz can top the first-year coaching records of Chlebek, Bicknell, Coughlin and O'Brien.

Brian: Great first outing on opening day in relief of Giants starter Tim Lincecum, who only lasted 3 innings. He did give up 2 earned runs but the Giants backed him with 2 runs in the 4th and 1 run in the 5th to give Martinez his first MLB victory.

However, last night he was bloodied up by a line drive off the bat of Mike Cameron that struck him in the head. He was able to walk away and was taken to get a CT scan. Here's wishing Martinez a speedy recovery. 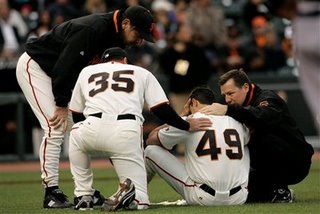 Brian: In an interview with Lars Anderson on bceagles.com, Anderson says the 2009 offense will be all no-huddle and much more up-tempo. The plays will all be called with hand signals. Does this at all worry you considering we will have one of three very green quarterbacks under center next year?

Jeff: Absolutely. This terrifies me with the lack of experience we have at the helm no matter who ends up being the starting quarterback. Longer term though, I like it.


Jeff: Buffalo Sabres prospect Nate Gerbe was named AHL Outstanding Rookie of the Year. How long will it take for Gerbe to make the Sabres roster?

Brian: If the Sabres don't make the playoffs, I would expect Gerbe to be called up sooner rather than later.

Jeff: BC probably deserves a slightly higher ranking but it's not so far off that I can call it foul.


Jeff: Goon's World takes a look at the number of NHL players from each NCAA men's ice hockey program. BC and North Dakota tie for second place on the list with 16 players, only topped by Michigan's 25 players. Anything on that list stand out as odd to you?

Brian: The few number of NHL players from New Hampshire jumps out at me immediately (5). The Wildcats are tied with Harvard, Michigan Tech, Minnesota-Duluth, Minnesota State, and Nebraska-Omaha - all non-factors on the national stage. And they wonder why they always crap the bed in the NCAA tournament?


Brian: Patrick Stevens of the Washington Post uses some crazy math (25 points for a National Championship, 10 points for a Final Four, 1 point for an NCAA tournament berth, and so on, and so forth) to determine which ACC basketball program has been the best over the past decade. BC ranks 4th on this list behind only the schools that have won National titles this past decade (North Carolina, Duke and Maryland). This surprise you?

Jeff: Not at all. We've known this for a long time. BC has had a spectacular run in basketball since 2000. Skinner gets a lot of heat from fans for no reason.


Jeff: Greg Norman shot two under in his opening round at the Masters. Any chance he finishes top 5?

Brian: Slight, slight chance. If I was playing oddsmakers, I would only give him a 5% chance. Still, impressive that he shot -2 and matched Tiger's first round. Norman is the sentimental pick to win, right?, since he has finished 2nd in the Masters three times - two times in the 1980s and one time in the 1990s. And you thought I knew nothing about golf!


Brian: Last one, the UVA blog From Old Virginia takes a look at the joke that is the four-team ACC men's lacrosse league. Your solution?