Share All sharing options for: Headlines: The 2009 Matt Ryan Roadshow

Brian: The NFL released their 2009 schedule tonight. Of course as a Giants fan, my eyes immediately darted towards the New York Giants schedule (definitely manageable this season if they can get out of September).

After that, however, I took a look at the Atlanta's schedule to see where Matt Ryan and the Falcons would be traveling this fall. The results? Well, let's just say a good number of BC alum will be excited ...

For those keeping track at home, that is four Falcons trips to three cities with some of the largest concentrations of Boston College alumni - Boston, New York x2, and San Francisco. Throw in Dallas for good measure and a game in the New Cowboys Stadium, and that is one great schedule for BC fans.

Note that the Falcons at Patriots game is the same weekend as Parents' Weekend and the ACC home opener against Wake Forest. Huge football weekend for Eagles fans September 26-27. 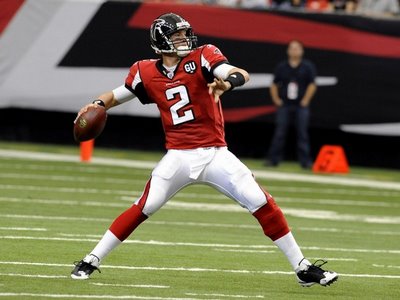 Also, and I know that Tampa and Miami aren't exactly that close, but the Falcons' regular season finale is in Tampa on January 3. The Orange Bowl is on January 5. Just saying.