Share All sharing options for: Comparing Donor Based Seating Plans 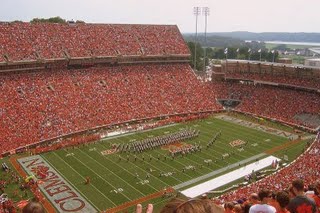 Jeff: As it has been well documented on this blog, I am a Clemson season ticket holder since I live in South Carolina and my wife has been an avid fan ever since her cousin played on the 1981 National Championship team. Yesterday, I received my Clemson season ticket renewal form which was just full of information on donor-based seating and parking.

Here is what I know about donor seating at BC and reserved parking on lower campus:

Brian, does anything shock you or stand out to you about Clemson's policies in contrast to BC's?

Brian: I guess I can't draw much of anything from this comparison since it appears to me to be very much apples-to-oranges. Clemson's Memorial Stadium has almost double the number of seats as Alumni Stadium does (80,301 to 45,000), as well as - finger in the air guestimate here - 8 to 10 times the parking on main campus available (if you don't count BC's satellite lots in Newton and Needham). And this isn't meant to disparage the South at all, but my guess is that Boston College season ticket holders have a higher per capita income than most Clemson season ticket holders, which can be the cause for differences in parking and DBS license rates (and a lack of different pricing tiers at BC).

That's all the BC ticket office would tell you about the DBS plans?

I guess I would like to know what percentage of Alumni Stadium seats are DBS seats. It appears as though Clemson offers approximately 5/8 of their stadium's capacity under a DBS pricing scheme. Is that a comparable ratio to BC's ticketing policies? Other ACC schools? What's the benchmark?

What's the number of parking spots available on main campus? My guess is BC is the most constrained for parking on the main campus where the football stadium is located.

I think it would be interesting to stack these DBS and parking spot policies up across the ACC and compare ourselves to other schools in terms of stadium capacity, number of parking spots, quality of football program and season ticket holder income. Comparing Clemson straight to BC doesn't seem to tell me much of anything.

What am I missing?

Jeff: I don't think you are missing anything. Keep in mind BC and Clemson started donor based seating within a year or two of each other so this a relatively new thing for both schools. Clemson's being more elaborate does make a little bit of sense given the larger stadium and more parking options, but also, because the stadium is larger and free parking is available within walking distance with full tailgating privileges at Clemson it does throw other factors into the mix. I basically just think that the Clemson ticket and parking policies are indications of where BC's ticket and parking policies are heading. I don't think it will last much longer where you can be seating on the edge of section B in Alumni and donating $750 per ticket to sit there while someone else is sitting a few feet away from you in section A and potentially donating nothing.

Your assumption that Boston area people have higher incomes is legitimate and it is also reasonable to assume that a higher percentage of family incomes might be spent on college football tickets in the south. Clemson's season tickets are $299.00 this year which offers a 15% or so discount off of buying all 7 games individually at face value where BC charges the same for each seat and each game regardless of whether or not they are purchased as part of a season ticket package.

The only thing you said incorrectly is that 5/8 of Clemson's seats require donations. If you back out visitor section seats and student seating, you probably get to about 85% of Clemson's available seats require donations. Meanwhile, none of BC's upper deck requires donations which makes up a very percentage of Alumni's seating. BC's donor based seating percentage of available seats is probably 30% or less.

I have been a season ticket holder for several years at BC (not counting student) and have called the ticket office multiple times to inquire about parking and DBS. With just one pamphlet in the mail from Clemson, I now feel I know much more about Clemson's policies than I do about BC's and I have a feeling this is where BC should and will head also.