Brian: Via Dr. Saturday and The Wiz c/o EDSBS comes this gem of a story out of the Big XII. 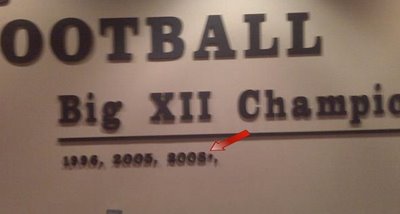 The Texas Longhorns decide to add fuel to the Big XII fire by claiming the Big XII Championship in 2008 on the wall of the Moncrief-Neuhaus training facility. The year 2008 is now inscribed on the wall (along with 1996 and 2005) with a big asterisk after 2008.

But how can you claim a Big XII championship when - if you recall - your team didn't even play in the championship game? Well, the asterisk notes that Texas defeated the two Big XII Championship game participants - Oklahoma and Missouri - in the regular season, but were left out of the title game by virtue of the BCS tiebreaker that broke the three-way tie in the Big XII South.

I'd love to know how the note that explains the asterisk reads. Really, Texas? Really?!

* If not for a Chris Crane broken collarbone.

* If you play an ACC Championship game in Jacksonville and no one is there to see it, did it really happen?

And finally, while it's true that we share one fourth of the 2004 Big East championship with Pittsburgh, West Virginia and Syracuse, I think it's high time we claim the championship outright.

* Thank you, Temple, whose sole contribution to Big East football over 14 years was breaking Paul Peterson's hand and denying BC the outright 2004 Big East championship in our last year in the league. That, and because our defense didn't show up and we let a safety-turned-running back rush for 141 yards and 2 touchdowns. A SAFETY!?