Share All sharing options for: The Mt. Rushmore of Boston College Athletics

Brian: Today we unveil our BC Mt. Rushmore. But first, let’s take a look at the final standings from our reader sidebar poll:
Thanks to our readers for the over 200 votes we received on this poll. So the reader’s version of Mt. Rushmore ended up being Flutie, York, Ryan and Flynn.
An admirable mountain of four, but my largest gripe with this list is the inclusion of Matt Ryan. Readers were split on voting Ryan onto the mountain. In the pro-Ryan camp, mmb1980 wrote "To me, Ryan's a no-brainer. But some may argue against having two former QBs."

In the anti-Ryan camp, Lally wrote "I'd view the BC Mt. Rushmore as a testament to who built the school's sports and solidified their reputation. Therefore, while Ryan is on the short list of the 'Best Evers' when it comes to BC, I'd have to place Snooks Kelley on the mount ahead of him."

Reader Erik added to this anti-Ryan sentiment: "I would like to put up a "VOTE NO" on Matt Ryan argument. I haven't thought it all the way through, I love the guy and he was really good here, but there's gotta be 4 better in the history in the entire school. If he makes it, its only because of the additional off-field achievements related to hype, PR, draft success, etc."

It's a tough call for Ryan. I’m just not sold on the impact Ryan will have on the football program going forward ... even if ESPN's Merrill Hoge thinks Ryan will be the most dominant athlete over the next 10 years.

Jeff, you and I had some lengthy discussions about who to include on the mountain. Never did we question including Flutie or York and much of the debate revolved around the final two BC greats.

If I had to construct my own BC Mt. Rushmore, it would have been:
I was not very sold on including Al Skinner, given the relative importance of Boston College basketball over the entire life of the athletics department. I could have easily replaced Skinner with "Snooks" Kelley. Kelley not only won the National Championship in 1949, but he also coached Len Ceglarski and Jerry York, thus beginning our succession of three great, great BC ice hockey bench bosses.

I ultimately settled on Skinner over both Matt Ryan and Troy Bell. Skinner has proved that he can do it more than once without Troy Bell, recruiting Craig Smith, Jared Dudley and Tyrese Rice and sustaining great success in both the Big East and the ACC. Judging by the fan vote, Skinner would be a controversial pick given that he finished 10th in the fan voting.

Jeff: If I were posting my own BC Mt. Rushmore, it would go something like this:
I am not placing an athletics director on my Mt. Rushmore because an AD is rarely the face of your athletic department. Stars are the face of your AD. Coaches nowadays are stars too as they have become household names with the internet and ESPN. Hell, even assistant coaches are household names now. Coaches also last longer than 4 years.

Brian: I agree with what you said generally about ADs but I feel like Flynn is our George Washington/founding father. Without him, like Ed said, we are Holy Cross. For that, I can make an exception.

Jeff: My Mt. Rushmore is very modern perhaps because of my ignorance of not knowing the former greats at BC. But it was thought out and I think anyone's Mt. Rushmore should be frontloaded because BC is currently going through its greatest era of sports ever - only one losing season in the three major sports since 2000 and two men’s ice hockey national championships.

Brian: Since life is all about compromise, we agreed on 3 of 4, and you couldn’t make up your mind on the fourth BC great, we settled on these four BC greats to be chiseled onto the Mt. Rushmore of BC Athletics. Drumroll please. 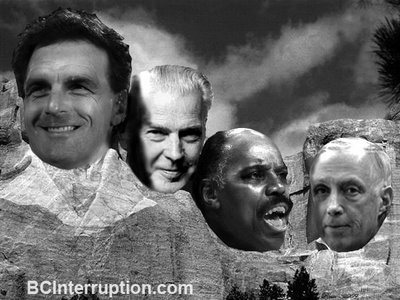 To a fault, perhaps we went too heavy on the coaches and administrators, but at the end of the day, student athletes only have four years max to make an impact on the university. And really, all Boston Coll. student athletes live in the shadow of Doug Flutie. Coaches and administrators have a bit of a leg up on athletes given that they can leave a more lasting mark on the school and our athletics programs.

Thanks for everyone's comments and contributions to our BC Mt. Rushmore. Also, special thanks to Christian for the Rushmore graphic. Feel free to chime in on our mountain in the comments section.