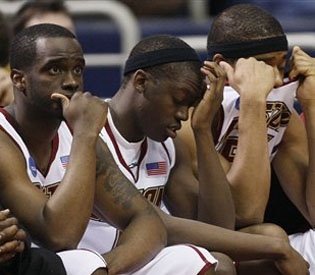 Brian: Not ready to talk about it yet. We'll have more on the loss and a season wrap-up in the next few days, but not today. Too soon.

Ok, so raise your hand if Cal State Northridge, East Tennessee State or Morehead State made you sweat more profusely than Gary Williams after Greivis Vasquez just picked up his fourth foul? Exactly.

I felt dirty inside rooting for my bracket (Memphis) when I should have been rooting for the Matadors of Cal State Northridge. I think Rick Maese of the Maryland blog 'Tracking the Terps' said it best though:

"It’d ruin all of my brackets, but if you can’t root for a 15 seed to upset a 2, you were probably born with no heart!"

Those teams played well against their No. 1 and No. 2 seeded opponents. I think we are coming closer and closer to a 16 finally breaking through and beating a 1 seed, but maybe I'm just deluding myself.

A somewhat boring first day where chalk ruled ... so you just knew it would open up on the second day. (13) Cleveland State, (12) Wisconsin, (12) Arizona, (11) Dayton and a (10) seed that will remain unnamed here all pulled off the upset on the second day, wreaking havoc on BCI readers' brackets.

On to the leaderboard:


And 9 brackets tied for 9th place with 24 points.

bobble24 went on a tear in the first round. Two perfect brackets so far in the West and East regional, a nearly perfect bracket in the South (Jeff called it but confound you, Hilltoppers!) and a 'meh' Midwest regional bracket that saw two Sweet 16 picks from the ACC crash and burn. I lost count but bobble24 ended up rattling off something like 13 straight wins on the tournament's first day. Impressive. Most impressive.

West Coast Bias is a point back in second but actually has the inside track to the title given that her bracket has 15 of 16 Sweet 16 picks still in play. We are not sure whether bobble24 is located on the West Coast, but the meme of the opening round was the superior knowledge of West Coasters - with West Coast Bias, Left Coast Chris and Omar all topping the leaderboard.

A couple of Coach Handsomes make the leaderboard, although I didn't see the T-Rice Show last night. Oh yeah, and Jeff would hurt me if I didn't mention that he makes the Top 10 this week. However, the first round loss of one of his Final Four teams - Wake Forest - knocks his possible total points way down.

This round's Straight Bangin' award goes to Der Springer, who correctly predicted the (13) Cleveland St. upset win over (4) Wake Forest and is currently tied for 4th place. Well played, sir. Runner up goes to the only other bracket to correctly pick the Vikings over the Deacons - conlonc.

And Jeff and myself for picking the West regional correctly. We disagree though on who will make it out of the first weekend in the West though ...

World of Ricecraft. Great bracket name (would be an even funnier poster), but can thank the Cleveland State Vikings for knocking out a National Championship game participant. If Rice was a World of Warcraft character, what character would he be?

Fear the Stache takes this round's Bracket FAIL Award for forgetting to pick a National Champion. Thanks for bringing down the Facebook group with the same name down a few notches. Also, after the first round, one thing I can say with confidence is that march152009, bcsuperfan94 and Pirate Drinks will not be winning this year's BCI NCAA Tournament challenge.


We'll check back in after we get down to the Sweet 16. Try to enjoy the games this weekend and forget about the events of last night ...