BC vs. Virginia Post Mortem, Duke and the Big Finish

Brian: I am flying solo today for this segment as Jeff is already headed off to Atlanta to catch the day's ACC Tournament quarterfinal action. So you are stuck with just me.

I was unable to watch the game last night (stupid ESPN programming), although I did catch the epic 6 OT game between Syracuse and Connecticut on the plane last night! Which, from everything that I read about the BC game (Herald, Globe, News & Observer and BCEagles.com) I guess if I was going to miss an Eagles game in favor of a game like Syracuse vs. Connecticut, it could have been worse, right? The Eagles seemed to cruise last night, leading by about 10 points most of the way. 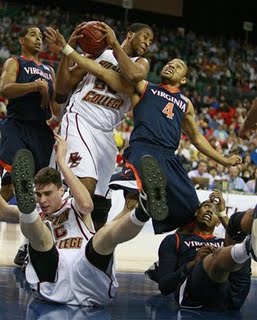 Sounds like Southern played very well last night. However, I wouldn't expect the same sort of performance - 13 points, 9 rebounds - against Duke forwards Kyle Singler, Lance Thomas and Gerald Henderson. Although not sure we need Southern to play as well as he did last night to win this game. Remember, Southern threw up the goose egg in the box score the first time the Eagles faced Duke this season.

Tyrese Rice with another zero in the box score in the first half. Off nights from our two leading scorers - Rice and Trapani - just can't happen again tonight if we have any hope of winning.

Lots of focus on attendance for this year's ACC men's tournament. The New York Times, the News & Observer, and commissioner John Swofford all weigh in on the issue. Funny how everyone is quick to blame Boston College for the football ACC Championship Game attendance woes, yet when the conference's premiere basketball tournament takes a nose dive a la selling out the place, the excuse is "big building, down economy." Can't that excuse also conveniently explain this year's ACCCG attendance issues? I mean, the economy hasn't worsened THAT much from December to March, has it? And Jacksonville and Tampa have larger stadiums than every other ACC stadium except for Doak, Death Valley and the cavernous Dolphins Stadium.

The reported draw for the opening round of games was 26,352. Not a bad day's take, even though from the sound of it, only a fraction of that crowd was left when BC and Virginia tipped off.

I also don't get the commissioner lamenting over the fact that the game isn't in Greensboro or Charlotte where it could have been a sellout. The Georgia Dome can seat more fans for basketball than the Greensboro Coliseum or the Time Warner Cable Arena f.k.a. Charlotte Bobcats Arena can, and at the end of the day, it's all about the revenue - and not the fact that it is a sellout - for the conference. Look no further than the cost of the tournament ticket book: $396. If the primary goal was to sell out the place and have a great atmosphere, wouldn't you simply lower the ticket price to do so? $396 is pretty steep in my opinion. Simple supply and demand, commissioner.

I also found this Clemson zinger in Bob Ryan's latest column on BC hoops pretty funny. (Much to the behest of Mrs. Jeff). Ryan explains how Boston College has had great success already in the ACC Tournament, winning their first game in each of their first four ACC tournaments, while Clemson's record in their first game of the tournament is a paltry 6-52.

As for the fallen Tigers, one well-seasoned ACC observer summed it up in a very succinct manner. "That's why they're Clemson," he pointed out.

I'm actually pretty shocked that Georgia Tech pulled off the upset and it doesn't seem like the home court advantage had much to do with it. The Jackets will be a tough out for Florida State. While I am glad the Eagles drew Virginia last night instead of Georgia Tech, I would have much rather played FSU than Duke tonight.

We turn our attention to the Duke Blue Devils, the Eagles quarterfinals opponent. The game is at 9pm on ESPN2. Since the Eagles last saw the Blue Devils, Coach K switched up their lineup, benching everyone's favorite Dukie Greg Paulus, moving Jon Scheyer to point and playing freshman guard Eliot Williams at the 2. Since Coach K made the change, Duke is 5-1, including impressive wins over Wake Forest and Florida State. Duke guard Nolan Smith is listed as "probable" to play today.

Something tells me Duke and Coach K will come out guns blazing tonight. This is a hungry Duke team playing for a strong NCAA tournament seed (maybe a 2?). Having lost to UNC twice in the regular season, they can see a potentially vulnerable, Lawson-less North Carolina team in their sights. Also, I don't think the Eagles can rely on the Blue Devils shooting 3 of 16 (18.8%) from 3 point range tonight. While I remain optimistic that the Eagles will hang tonight and can possibly pull off the upset, it will be a much tougher billing than knocking off Duke back on February 15.

Honestly though, in the ACC Tournament, when it is all said and done, we always know it comes down to Duke and North Carolina right? Of course it's UNC and Duke. It's always UNC and Duke ... /sarcasm

Jefff: Ron Green Jr. takes a look at this weekend's ACC Tournament from an American Idol perspective. Paula and Simon comment on Boston College's hoops season, but what would Randy say about the Eagles?

Brian: "So check it out dawg! Check this OUT! You had some nice moments this season but at times you were a little pitchy. A few pitch problems in there for me but it was OK. At the beginning of the competition, I didn't think much of your chances, but yo! You made it your own season, and at times, ... it was kinda HOT, yo."


Brian: Robert Morris is dancing, remember them? First time since 1992 too. Does this at all soften the blow of losing to the Colonials 57-51 last year?

Jeff: Last year's loss was fairly painful and still is in my recent memory. So, umm, no.


Jeff: Bowling Green, facing a university-wide budget shortfall of up to $10 million (three quarters of a million being due to the athletics budget) may cut its D-I men's hockey program as a cost-cutting measure. Your thoughts?

Brian: This would be terrible for the sport. A lot of programs and a few conferences have folded up shop over the past couple of years, but this would be the most accomplished program to fold in a very long time. As you know, Jerry York won the school's only National Championship back in 1984, and it would be pretty embarrassing if a program that won a National Championship was shut down. More bad news for Bowling Green is that the school's president shut down the Kent State men's hockey program in 1994 so the move would hardly be unprecedented. My only question would be are there any other athletic departments that will be forced to make a similar move in this economy?


Brian: Want to watch the NCAA tournament without your boss or company being none the wiser? There's an iPhone app for that. Jeff, you impressed?

Jeff: That is fantastic.


Jeff: It looks like for the second time in three years, the MAC is wreaking football scheduling havoc over a BCS conference team. This year, it is Miami (Ohio), who can't honor their 2009 September 12 home date against Colorado. Brian, your thoughts?

Brian: The solution is simple. You know I have been bitching about BC beefing up their non-conference schedule. September 12 we play Kent State at home. Drop the MAC team Kent State in favor of hosting the Buffaloes at Alumni this year. This beefs up (pun intended) our out of conference sched - Colorado should be better than they have been the last few years - and gives the MAC a little dose of their own medicine.


Brian: Yesterday I predicted a BC win tonight over New Hampshire. Are you as confident in the Eagles going into the Hockey East quarterfinals tonight?

Jeff: Absolutely. They'll win the series against New Hampshire and it starts tonight with a W.


Jeff: Last one, the BC baseball team (10-3, 2-1 ACC) is also in Atlanta this weekend, taking on the 6th ranked Georgia Tech Yellow Jackets (11-1, 3-0 ACC). Can the Eagles build on their success from last weekend's series win over Florida State?

Brian: My gut tells me that BC won't be able to take the series but I hope they can steal a game from Georgia Tech.


Huge weekend for BC sports. Leave any thoughts on the ACC Tournament, NCAA tournament selection process, Hockey East Tournament, baseball or Pro Day in the comments section below. Go Eagles!