Praise The AD For Keeping Ticket Prices Flat!? And The Big Finish

Share All sharing options for: Praise The AD For Keeping Ticket Prices Flat!? And The Big Finish

Brian: Since we know you all missed him, we'd like to welcome back Jeff to the blog. Welcome back! How does it feel to take the plunge?

Jeff: It feels great. The last week has been awesome but it's nice to be home and finally settling in to a normal routine. The wedding planning and everything did become pretty involved. You're next in another few months, good luck!

Brian: So we have a lot of catching up to do, but before we fully catch you up ... tell us what's on your mind.

Jeff: BC sent out an email today begging season ticket holders to renew their season tickets in these tough economic times. In the email they remind people that they'll be able to renew their tickets in 2010 also for the season that will include the final Notre Dame home game for the next half dozen or so years. They also remind season ticket holders that they are able to purchase tickets to away games for all games except the Notre Dame game next year. Finally, they pat themselves on the back for not raising ticket prices for the 2009 season. Coming off a season where the only packed house was the ND game, how funny is this? With the economy the way it is these days, if the local movie theater raises its prices you stop going to movies, right? Even forget not raising their prices, if they don't have specials and coupons you're not going there for entertainment, right? Why are universities patting themselves on the back for not raising tuition or not raising ticket prices next year? In this nearly deflationary economy, why should we applaud these steps taken by BC or other institutions holding tuition rates flat? 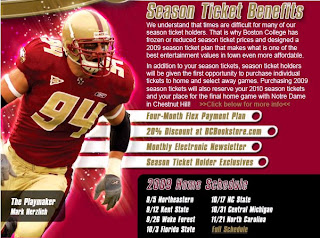 Brian: Well, we shouldn't applaud these school's athletic departments. You're right. It's comical. Specifically for BC, you have to question what season ticket holders are actually paying for next season. Seven home games ... three against Central Michigan, Kent State and Northeastern. All snoozers. Then the ACC home schedule isn't much better - UNC, NC State, Wake Forest and Florida State. Florida State will be a hot ticket, but beyond our game with the Seminoles, I am hard pressed to come up with a solid #2 and #3 game. I guess I'd have to go with #2 NC State and #3 Wake Forest.

However, this is a big drop-off from the dream home slate of Virginia Tech, Clemson and Notre Dame. We probably won't see another home slate of games until USC comes to Boston in 2014. In 2014, the Eagles will get the Trojans, Tigers, Hokies, Tar Heels and Terrapins at home.

Jeff: I have finally realized why Jags didn't mind getting fired. Jags was ready to leave because the Gold Rush campaign was a bust. TOB thought that if he could build a winning program at the Heights, Alumni would be packed for every game, fans and alums would travel to bowl and then BC would get slotted in the bowl games they deserved. He was wrong and then was ready to leave. Jags thought BC needed to be taken to the next level and then fans would support the team better at home and on the road. Jags brought the team to the ACC Championship Game and then tried to implement wearing Vegas Gold (the color Georgia Tech wears) at home games for an SEC type atmosphere and it was a complete bust. Furthermore he brought the team to a second ACCCG and support was worse than the first one even though fans initial excuse was not being able to find flights and accommodations in Jacksonville. Upon realizing BC fans are not going to change he headed to the NFL where every game, home and away, is sold out. Brian, am I on to something here?

Brian: I think it is tough to link the lack of Eagles hometown support with Jags departure. TOB hid behind this reason (excuse?) on his way out of Chestnut Hill. But for Jags, I don't think the fan support had much to do with his decision to leave BC. In Jags case, I think it had everything to do with the fact that he was a pro coordinator before coming back to college and taking on a head coaching opportunity. Once he got a taste of the NFL, after two seasons at BC I think he realized that he missed the pro game - not having to deal with recruiting, not having to deal with academic and personal issues of kids 18-22 years old, etc. The grass is always greener on the other side, right?

Jeff: Let's just imagine that the gold rush had taken off and alumni was packed like this. Jags would've felt that he was a part of creating something and possibly would've felt more obligation to stay on as head coach. Instead, the rest is history. Can we blame the fans for a second?

Brian: No, I'm not going to blame the fans for this. Our fan base is what it is. I wish there were more die hard fans but there simply aren't at this point. There are certainly other factors at play here. I think one is that Gene doesn't have the "anyone, anytime, anywhere" philosophy when it comes to scheduling college football teams. Could this have been one of the "disagreements in direction" that Gene and Jags had? I mean, really, how appealing is it to go to Chestnut Hill for a noon game against the revolving door of MAC teams, Northeastern, Rhode Island, Maine, Hofstra, Central Florida, etc. Why would anyone want to pay a significant amount of money to see the Eagles beat down on those types of teams? If Gene went out and scheduled a bunch of BCS conference teams and wasn't scared into thinking he can only schedule 1 BCS conference opponent and three cupcakes, maybe more fans would come out. Wouldn't it be great to have a good SEC, Big XII, Pac 10 or Big Ten program play at the Heights?

Another factor is that Gene and college football programs everywhere are sort of forced to adopt these sorts of scheduling practices (1 decent opponent and 3 cupcakes). Since strength of schedule was taken out of the BCS formula, the M.O. for most programs is schedule 4 patsies and win at least a couple of conference games so you can get to a bowl. The reward structure for scheduling tough opponents is actually backwards with the current bowl system. You have to look no further than the joke of a Notre Dame schedule that the Irish play in 2009 to see what college football rewards in terms of scheduling.

Finally, it takes time to establish rivalries with our new ACC friends. The ACC seems to want to make Maryland a rival, but they haven't been historically relevant in football and have taken a downturn in basketball the last few years. Most of these other schools seem to be simply too far away to develop any sort of meaningful rivalry yet. It will take time before casual fans and students decide to get amped for a noon game against a team like NC State, North Carolina, Virginia or Duke.

Brian: HD unveiled her Mt. Rushmore of BC Football. Setting aside the fact that she didn't give us any credit for stealing ESPN's idea and applying it to college, did she get it right (considering she's only followed BC football for exactly 1 season)?

Jeff: I think TOB is missing from her list. TOB took the program from virtually nothing and led them to 8 straight bowls winning 7. No one from his era made the list except Matt Ryan who was only the starter in his final two seasons.


Jeff: This week's USCHO's college hockey bracketology is out and there is no B.C. in the field of 16. Cause for concern?

Brian: Absolutely cause for concern. After last week's dismal 1 point weekend against Lowell (!) and with 6 games to go, 4 of them against New Hampshire and Northeastern, Eagles fans have been hitting the panic button for a few weeks now.

Jeff: Not wearing a gold rush shirt to the home games I attended.


Brian: Last one, big, big basketball game tomorrow as the Eagles travel to Coral Gables to take on the reeling Miami Hurricanes. Make a prediction. Who wins? What's the score?

Jeff: Losing two games to Miami this season would be an extreme dissapointment. I think the Eagles split the season series with a 74-59 victory.