Odds Tyrese Rice goes over 20 points tonight in his final college basketball game in his home state of Virginia?

Brian: Rice is averaging 17.9 this season so 20 points or more wouldn't be out of the question. His scoring average is actually trending upwards, averaging 19.6 points per game in his last 7 games (going back to the Miami game). In his last 7 games, he has gone over 20 four times, tallying 21 against Miami, 20 vs. Wake Forest, 26 at Georgia Tech (which included OT) and 25 vs. NC State. Add in the emotional factor of playing in the state of Virginia for the last time as a college player, I'll go as high as 75%.


Odds the Eagles win one of three games against Wake Forest, Clemson and Duke?

Jeff: The odds are good here. Clemson at home probably being the best chance of the three games but in all three have a chance. Wake Forest have proven they are beatable after losing to two different teams that we have already beaten in Virginia Tech and Georgia Tech. I would say we have something like a 10-20% chance against both Wake Forest and Duke and then a 51% chance of beating Clemson. Overall that would give us about a 63% chance that we win one or more of those three, but I'm throwing the math out the window and saying 100% chance BC beats one of those ranked ACC opponents before the end of the season.

Brian: I know you are ever the BC optimist, Jeff, but 63% seems a little too high. I'm going to assume we'll drop our games against Wake Forest (we got killed at home, can't imagine it will be any different on the road) and Duke (might be the best team in the country). So let's focus on the Clemson game. kenpom predictor has us losing the Clemson game 77-74. A close one. The Eagles certainly won't be favored in this game, even at home, unless Clemson suddenly falls apart and looks terrible in their games against Duke and Florida State. So just focusing on the Clemson game, I'll give the Eagles a 40% chance of winning that game, and a 45% chance of either defeating the Tigers or surprising me and taking down Duke or Wake Forest.

Brian: Let's take a look at the list. We've got eight regular season games left with three of those games coming against ranked opponents - No. 4 Duke, No. 7 Wake Forest and No. 10 Clemson. So that leaves five games at Virginia (tonight), at Miami (FL), Florida State, at North Carolina State and Georgia Tech. Of those five games, I'm fairly confident the Eagles can take care of the reeling Cavs, North Carolina State and Georgia Tech. A road game in Coral Gables will be a fairly tough game to win even though Miami is on a three game slide. Same with Florida State. 5-0 against teams we should beat is a tall order for this team as you never know what you are going to get night to night. It's also equally plausible that we knock off one of the ranked teams and lose to one of these unranked teams. I'll go with a low 15%.

Jeff: Odds are very high here. Right now BC is in the #5 spot for the tournament which gives them a first round game against the last place team in the league. At that point of the season a last place team typically has thrown in the towel and I fully expect that to be the case with Virginia or whoever else holds that spot. We might fall from 5 to 6 but I doubt we fall any further. 94% chance BC wins their first round ACC game.

Brian: If we hold our position or drop a little in the ACC standings, we are likely looking at a game against Georgia Tech, Virginia or North Carolina State in the first round. While I am confident that the Eagles could beat any of those teams, this team has shown some wild inconsistency throughout the year and 94% seems way too high. Take a look at our struggles to put away a team like Georgia Tech. The whole conference from top to bottom is very strong and even the teams at the bottom of the standings could easily pull off the first round upset. I also don't like the fact that if we draw Georgia Tech, they will be playing their first round ACC Tournament game in their own backyard (the Georgia Dome). I only give the Eagles a 65% chance of winning the opening round ACC Tournament game.


Odds Tyrese Rice is on an NBA opening day roster next year?

Brian: I will give Rice an 85% chance of landing a spot on an NBA opening day roster. A few mock drafts have Rice going as an early second rounder. This year's NBA draft will certainly have a good deal of talent at the PG position (Wake's Jeff Teague, Stephen Curry, VCU's Eric Maynor, UNC's Ty Lawson, UCLA's Darren Collison), but Rice is one of the better point guards in the best basketball conference in the country. Someone will give him a shot. 85%.

Jeff: I am thinking that the only way Rice is on an opening day roster is if he gets drafted. If he does go undrafted he might find his way on to an NBA team but it could take longer to work his way from practice squad to the bench. Rice has always and will always be one of those guys who has college game that doesn't appear as if it will translate to the pro level. If he goes in the second round I won't be surprised but if he doesn't, I won't be surprised either. 50%


Last one. Since it's signing day, Odds that BC has the worst signing class in the ACC according to Rivals?

Jeff: Unfortunately I'm going to go high here. BC has a class that is low in volume which will hurt the stupid rankings to begin with. Add to thatthe struggles we have had so far and our 2 star targets and we are set up to be ranked very low relative to others in the conference. Teams that we might be ranked ahead would include UVA, Wake, and Duke. But unfortunately Duke is going to have an extremely strong recruiting class by their standards with the little bit of hype surrounding their football program right now. I'm going to say there is an 85% chance that BC does have the worst recruiting class in the conference.

Brian: The answer here is 100%. I'm not going to get too worked up over it all. To give you a sense of what the major recruiting sites are projecting, take a look at ESPN's ACC College Football Recruiting list. Eight of the Eagles eighteen commits have been given a grade of 40 by ESPN, basically suggesting they didn't bother to even evaluate these kids. Virginia only has five such recruits with a grade of 40 and Virginia Tech has four.

Consider the fact that guys like Mark Herzlich and Albright weren't highly touted out of high school (Herzlich graded a 75 in 2006, Albright a 40) and like I said I'm not going to get too worked up over what Rivals or Scouts says about this recruiting class. At least every indication is that next year's class will be even better.


Brian: We bring in BC basketball guest blogger Raj for a recap. Raj, who won?


Raj: Tyrese "Sweet Lady" Rice is a great guard for Boston College, but I find it hard to believe that he gets drafted. He's undersized, an average defender and still a mediocre passer. That being said, everything else was a tossup and Jeff's lack of analysis in "Will Rice score 20 points?" leaves me to clean up his mess like Corey Raji and declare Brian the winner. Brian, let's hear your best Johnny drama impression. 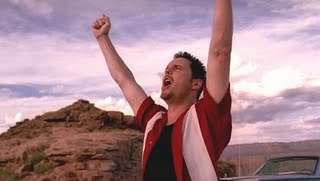