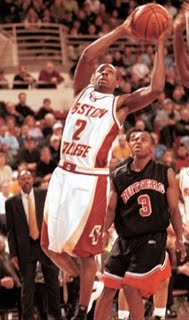 This was certainly a team effort, but witness the exact moment of Boston College basketball resurgence under Al Skinner ...