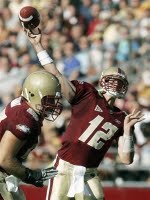 
Why He's In
Maybe Not?
X-Factor
YouTubage

Also, keep the votes coming on the side bar poll and use the space below to explain those Write-In votes (11% of votes are write-ins!).