Who Belongs on the Mt. Rushmore of BC Athletics?

Share All sharing options for: Who Belongs on the Mt. Rushmore of BC Athletics?

Brian: The Worldwide Leader's latest gimmick - something they are calling the "Mt. Rushmore of Sports" - asks readers to nominate four people to represent each US state's make-believe Mount Rushmore.

SportsCenter, ESPN’s flagship news and information program, and ESPN.com, the leading online sports destination, will combine to present a five-week, fan-based series to celebrate the sports icons from all 50 states, the District of Columbia and Puerto Rico. The series, titled "SportsCenter Mount Rushmore of Sports," will use fan-generated nominations on ESPN.com to identify the top four sports greats in each state/region, and online voting to select the state with the most impressive collection of sports luminaries worthy of being etched in the state’s Mount Rushmore of sports. 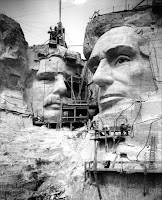 The five states with the most significant collection of sports icons will be revealed February 16-20 on SportsCenter.

Why would ESPN subject us to this? Because Titletown U.S.A. and Who's Now? weren't good enough? This whole thing sounds kinda lame ... but that's beside the point. We are convinced the four-letter network MUST have got the idea from golden boy Bill Simmons and his Mt. Rapmore concept. Even if the network and BS have been feuding ...

Even though we cringe at associating ourselves with anything even somewhat related to Bill Simmons (let's be clear, this is a B.C. sports blog and dude has been crying about his Boston Coll. rejection letter for as far back as we can remember), we decided to bite.

The question we started to ask was who would be placed on the Mt. Rushmore of Boston College athletics?

Over the next week or so, we will profile 8-10 candidates who we would consider placing on a Mt. Rushmore of BC athletics. Then after we have revealed our candidates, we'll unveil who should be on BC's Mt. Rushmore (or put it to a reader vote if there's interest, or something).

The guidelines:
But before we begin unveiling our candidates, we are interested in your thoughts. Who ya got on a BC athletics version of Mt. Rushmore?