Share All sharing options for: Toss Up: BC-Wake Game Tonight 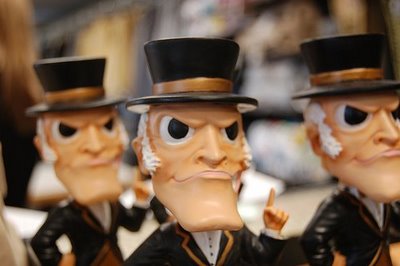 
We're Goin' Streakin': Wake Forest is undefeated on the season, having won their first 14 games. Quality wins against Brigham Young on the road and vs. North Carolina. Boston College is 7-0 against Wake Forest in the all-time series.


We preview tonight's matchup between B.C. and Wake Forest with a game of Toss Up.


Toss Up - Rice scoring more or less 3x the number of points he has in the first half in the second half.

Brian: I don't think Rice will get off to a slow start this game. The students will be back and there should be a good atmosphere in Conte for this game. Rice may have a better second half than his first half performance, but he won't score 3 times as many points as he does in the first half. The only wildcard in this equation is if he gets in foul trouble by committing dumb fouls early in the first half. But I'm not expecting that type of game from Tyrese tonight. Less than 3 times the number of points.

Jeff: If you define overrated by furthest deviation from what their record will be at the end of the season, it's Wake Forest. Wake is a top 25 team, but not a top 10. Meanwhile Clemson will finish in the top 15 or top 20.

Brian: I hate to do this, but I agree with you. Wake Forest is the more overrated team at this point in the season. Clemson at least has a few quality wins against Temple, at Illinois (13-2) out of conference, not to mention they smacked around Miami (FL) on the road, winning by 91-72. I thought when originally posed the question that the answer would certainly be Clemson (as they have beat up on every small South Carolina school that fields a team of 5 players), but looking at the results so far this season, Wake is the answer. Wake has only two quality wins - both coming in their last two games - against BYU and UNC. And as Eagles fans we've seen how beating media darling North Carolina over-inflates your stock. Wake Forest is the answer.

Jeff: I have to admit that I have not watched Wake play much this season, but I have been very impressed with Reggie Jackson. I expect another good game from him tonight since he has been improving throughout the season thus far. It looks like the team will be in capable hands at the point for a few years to come.

Brian: I, too, haven't seen Wake play too much this year, but the answer is Aminu. Aminu is the better freshman. Maybe it's comparing apples-to-oranges (guard vs. forward comparison), but Aminu's five double-doubles this season is pretty filthy. 21 and 10 vs. NC Central, 11 and 12 vs. UNC-Wilmington, 13 and 12 vs. Baylor, 21 and 12 vs. East Carolina and 18 and 10 vs. Radford. That being said, I have also been impressed with Jackson's performance to date and hope he has a big game tonight.


Toss Up - The Wake Forest home crowd storming the court after their win over No. 3 North Carolina on Sunday night. Fair or foul?

Jeff: Foul. Hello Wake! You were undefeated and ranked #4 in the country. You should not be storming the court when you are ranked that high. So that's the first court storming rule you broke. Secondly, you don't storm the court when the opposing team is coming off a loss. North Carolina has now lost back-to-back games. Meanwhile, the Eagles fans can storm the court tonight if they win. However, I don't know how many students will be there since classes have not started up again yet.

Brian: I have to agree here. Foul. I realize that this team is rebounding from the loss of head coach Skip Prosser two years ago, but Dino Gaudio has done a great job of building this program back up in only his second year. ACC Player of the Week Jeff Teague is an absolute beast. Act like you've been there before. The crowd tonight will be good, Jeff. I think the dorms will have opened back up and hopefully students return early today to catch the game. But please don't storm the court. We just knocked off No. 1 on the road. Let's act like we expect to win. (Note: we haven't had a good, ol' fashioned court storming since we were freshmen?)


Last one, Toss Up - Who Ya Got? Boston College or Wake Forest?

Jeff: I'm torn here. I think BC can and has a very good chance of winning, but if there were a gun to my head and I had to choose sides, I have to go with Wake Forest. BC simply did not play close to well enough against Miami to win tonight's game. I hope I'm wrong. Additionally, I'm shocked the line is only Wake -3.5. I thought it would be Wake -9 or so.

Brian: Wake wins. Like you said, I hope we're both wrong, but I think Jeff Teague will have a good game and will single-handedly win this game for the Deacons. Score prediction: 81-74 Wake Forest.