Oklahoma: A State for Winners!

Share All sharing options for: Oklahoma: A State for Winners! 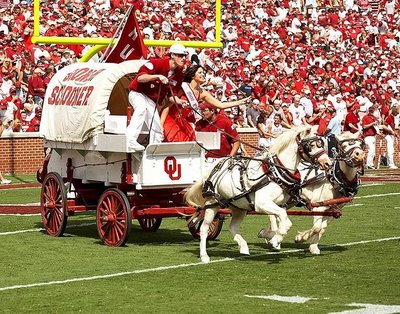 You may have heard of a silly thing ESPN came up with called the Bowl Challenge Cup, where they take the cumulative record of each conference's bowl participants and award some dumb trophy to the conference that has the highest winning percentage. This year, after playing terrible, terrible football and watching the Mountain West Conference drink their milkshake during the regular season, the Pac-10 took home the trophy, posting a 5-0 record in this year's bowls (Rose, Vegas, Holiday, Sun, and Emerald, to be precise).

So I personally don't put much weight into ESPN's Bowl Challenge Cup, but I got to thinking about a similarly inaccurate measurement of college football teams that answers the following question ...

How would US States compare if you tried to measure them in some Bowl Challenge Cup-type challenge?

Everyone knows that Florida is this year's National Champion ...
That Florida, Texas and California are considered the football recruiting hotbeds of America ...
And that you should buy the SEC and the Big XII this year, and sell the Big Ten and the Big East (ACC too?) ... but how do states stack up with one another?

We took a look at 41 of the 50 US States* and tallied up the winning percentage for the FBS schools in that state.

Being a Boston College blog, we were interested in seeing where the state of Massachusetts - as New England's lone FBS state representative (Connecticut? Nah.) - stacked up to the rest of the country.

The results are surprising. Without further ado, here is your Top 10:

What about the other end of the spectrum? Here is your Bottom 10 state cellar-dwellers:

New Mexico would like to thank the state of Washington for keeping them out of this year's basement. New Mexico and New Mexico State won a combined 7 games, and as a result of such futility, both head coaches were fired this offseason.

Also worth nothing that there are some powerhouse states on that list, including Tennessee, Ohio, and Louisiana. But upon closer inspection, you come to realize that there is a whole lot of mediocrity in the State of Ohio for programs not named Cincinnati or Ohio State. And it seems like Ohio State plays 4 of those teams on that list out of conference every season!

And the programs in the state of Louisiana who are not LSU usually take their requisite $1-2m SEC beatdowns in stride. This year, however, the previous defending National Championships finished a pedestrian 7-5 before waking up and realizing they shouldn't be that bad of a team and pounding Georgia Tech in the Peach Bowl.


But what about Texas? The state with the most FBS teams (10) couldn't capitalize on great seasons by:

as these teams' seasons were offset by abysmal performances by:

Finally, we thought it would be fun to compare the States that contain ACC schools ... of which there are 7. From North (best?) to south, they are Massachusetts, Maryland, Virginia, North Carolina, South Carolina, Georgia and Florida:


Your winner here is Georgia, which tied for 2nd nationally with Oregon. Strong seasons by both Georgia Tech and Georgia propelled them to the top stop in the conference.

BC's 9-5 season was good for 2nd place. At the bottom of the standings are the Carolinas, weighed down by sub-.500 season from Duke (4-8), North Carolina State (6-7) and vastly mediocre seasons - given preseason expections - by both South Carolina and Clemson (each 7-6).

So there you have it. Congratulations, Oklahoma! Even though you have gone 1-3 in BCS title games under Bob Stoops, you can take comfort in the fact that the State of Oklahoma played the best football in 2008.

And to Paul Wulff and Steve Sarkisian, best wishes for 2009. You have a lot of work to do up in the Pacific Northwest. But I guess the good news is, the only direction you can go is up? 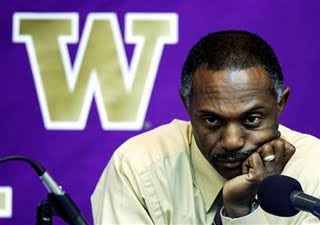 * With apologies to Alaska, Delaware, Maine, Montana, New Hampshire, North Dakota, Rhode Island, South Dakota, Vermont and the District of Columbia - who don't know the pleasure that is FBS football.