Share All sharing options for: Headlines: Take That Tar Heels 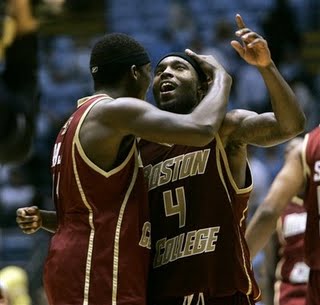 Jeff: If you didn't watch the game and only saw the final score you might assume that either BC went off from three point land or Rice went off. Actually, neither one of those happened. Rice played well and we did shoot well from 3 but they are not the story. Rakim Sanders played spectacularly, Reggie Jackson had his best game yet, Raji got plenty of offensive rebounds, and Southern played great inside. Late in the game, UNC could not hit a three to save their lives and UNC shot poorly from the line as well but if you watched the game BC really looked like they could play with UNC even if they had shot the ball well and a lot of those stats got skewed late in the game.

Normally, when you beat a #1 team on January 4th in their first conference game you might think well, they were probably overrated. That is often true but not in this case. This is UNC with Tyler Hansbrough that made the Final Four last year returned almost all of their players. I wouldn't be at all surprised if UNC gets back to their #1 ranking in a few weeks. Remember, this is not just a normal midseason #1 team, this is a UNC team that ESPN was already posing the question of "Can the go undefeated?"

Brian: I don't really have much to add as the game wasn't on TV down in New York and I don't have the dish (don't have the option of getting a dish in my Brooklyn apartment, that is). Despite ESPN.com's best efforts to give the Tar Heels the game (for whatever reason, the Last 15 Plays section of its Gamecast gave the Tar Heels one more point than they really had), I was happy to see the Eagles win the game. What is still concerning to me is holding onto leads late in the game and breaking a press.

Now the Eagles were getting no love in either the AP Poll or the ESPN/USA Today Coaches poll. At 13-2 with a win over a consensus No. 1 team, what are the chances that the Eagles land in the Top 25 after this weekend's performance?

Jeff: BC did have their typically struggles getting the ball in and past midcourt late in the game but they didn't have a lot of turnovers in this one, really just needed to burn several timeouts when they were trapped.

I expect to see the Eagles ranked in both polls now with a ROAD win over the concensus #1 team in the country. It is going to be a huge jump considering I don't believe BC has gotten a single vote any week yet this year but I expect them to be ranked nonetheless. Also, I'm not going to say I told you so since I did not predict a victory over UNC, but I have been telling you that BC is a much improved team this year that will be very competitive in ACC play. I imagine a lot of fans will jump back on the bandwagon after this game and attendance at home games will be much improved, especially for the upcoming matchup against Wake Forest.

Brian: No Jeff, you don't yet get the satisfaction of an "I told you so" but you can say you have been on the BC bandwagon far earlier than most hoops fans. Also, much has been said about lagging BC hoops attendance, but like you said, attendance should improve. It all boils down to what the students make of the situation. If you remember, when we were freshmen we experienced a similar season the year before we enrolled (1999-2000) as the program had during the 2007-2008 season. We were able to get in on the ground floor and get great student seats our freshman year and attendance steadily climbed as the program improved under Skinner. If students begin to make the most of their opportunity right now and the program continues to climb again after a lackluster season, more students will attend and Conte Forum crowds will improve.

Jeff: This is the type of win that can take Conte Forum from what its been to the packed electric atmospheres we experienced in 2001 conference play but only time will tell if the fans do follow my expectations.