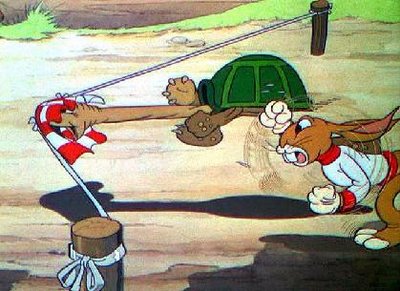 Jeff: Somebody forgot to tell Maryland, whose mascot is a turtle, that slow and steady wins the race. It's not how you start, it is how you finish.

In the famous tortoise and hare story, Maryland certainly played the role of the hare by getting out to a 16 point first half lead only to fade quickly in the second half and ultimately lost the game by 9 points. The Eagles looked very poor in the first half, looking almost as though they didn't even want to be there. Rice spent most of the half on the bench which is an extremely unusual thing for him and this team. The second half was different though. Brian, what, if anything, did you see that helped turn the momentum in BC's favor?

What did I like? Biko Paris draining a 3 point bucket to end the first half cut the lead to a much more manageable 11 points. That was a key bucket in the game.

Jeff: I agree that the Paris 3 was big.

Brian: Also, somehow without any changes to the offensive playcalling, we were consistently able to beat the Terrapin full-court pressure in the second half. Rice and Trapani did a better-than-average job of beating the trap.

Jeff: The primary reason why the Eagles didn't struggle against full court pressure in the second half was because Maryland didn't score everytime. After a made basket it is possible for the defensive team to get into its full court press. After a miss or a turnover all the team can do is pick up man to man which is largely ineffective.

Brian: You also have to like the second half play of Rakim Sanders - the international man of mystery wearing a nameless #33 jersey - and Corey Raji. Sanders scored 11 of his 16 in the second half, and I thought his tip in bucket late in the second half (2:26 to go) off a Reggie Jackson missed fade-away jumper typified his solid, aggressive performance last night. This Maryland team is equally undersized, and it was great to see Sanders streak to the net for the putback. Raji was also a solid contributor from the bench with 9 points.

Finally, I know a lot of Eagles fans are critical of the Flex offense, but offense has not been the problem for this team. In fact, a third of the way through conference play, the Eagles rank #3 in offensive efficiency behind only Duke and North Carolina. The problem and the inconsistency with this team has come from our defense (defensive efficiency is the other side of the coin, as the Eagles rank 10 of 12). Tonight, the defense was much better in the second half as we limited the Terps to 27 points and 11 of 37 shooting. If the defense can duplicate efforts like this, the Eagles will be tough to stop throughout the rest of conference play.

It was also kinda funny to see Grievis Vasquez crying on the bench after fouling out in the second half. Vasquez finished with 18 points. While I have nothing personal on the guy (I mean, he's no J.J. Redick or Greg Paulus), Vasquez might be one of the most hated ACC ballers across the conference. Why is this?

Jeff: Why is Vasquez hated?


Vasquez being hated this year is not going to be an ACC storyline it seems as the Terps are sliding in the conference standings.