Jack Bicknell Jr. Out As BC Assistant And The Big Finish

Share All sharing options for: Jack Bicknell Jr. Out As BC Assistant And The Big Finish 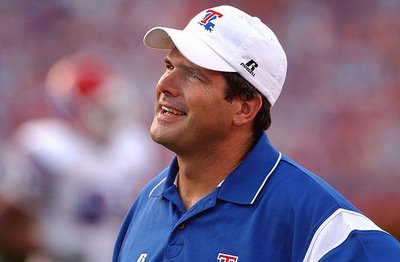 Jeff: Jack Bicknell Jr. is out. He's headed to the Giants to coach under Tom Coughlin as an assistant offensive line coach. Of the three names tossed around as the internal head coach candidates to replace Jags, now one of them is the coach and the other two, Logan and Bicknell, are gone. Personally, I think this was one of the major downfalls of promoting Spaz. I think the most likely scenarios had Logan and Bicknell both leaving if they were not named HC, but if Spaz had not been named HC, I think he would've stayed on as defensive coordinator, don't you? Now that Bicknell and Logan are both officially gone, are you more disappointed with the Spaz hire or were these departures already factored in to your initial frustration?

Brian: I think Spaziani would have stayed on as defensive coordinator if he wasn't promoted, but you never know how disappointment plays out with individuals. Disappointment affects people in different ways. Sounds like Bicknell Jr. - having at least some head coaching experience - felt pretty disappointed that he wasn't promoted to head coach. According to Blaudschun, he received assurances, but no guarantee from DeFilippo or Spaziani that he would be retained on the coaching staff. I am glad to see that he joins BC South (the New York Giants) and his friend and ex-BC Head Coach Tom Coughlin.

Regardless of how you feel about the Jagodzinski firing, this is a tough loss for the coaching staff. These losses - however - were certainly already factored into my initial frustration. I know some Eagles fans welcomed the departure of Steve Logan, but I thought he was a good coordinator that helped to open up the offense with Matt Ryan. With Bicknell Jr., the team moved to the new zone blocking scheme in 2007. While BC had its growing pains adopting the new blocking scheme, the line seemed to play much better this season.

I'll be very interested to see how our last two seasons worth of offensive recruits (both skill position players and the offensive linemen) adapt if the system is changed for next season. At least in the short-term, I think this may have an impact on the 2009 and 2010 seasons. Would you agree?

Jeff: I am not a football Xs and Os guy so I don't know how detrimental a change in schemes would be but the whole continuity thing that Gene stressed in coaching should be because he wants to build around recent success and have success with out current players. Hiring externally, theoretically, would've been more detrimental to our 2009-10 seasons.

Brian: This was somewhat assumed, but today Blaudschun is reporting that Ryan Day and Bill McGovern are the leading candidates to take over the offensive coordinator and defensive coordinator posts, respectively, in 2009. That cool with you?

Jeff: I am cool with that as long as they don't then promote grad assistants and water girls to fill McGovern, Day, and now Bicknell Jr.'s current positions. You can't replace EVERYONE with internal people!

Brian: With BC's victory over Georgia Tech, the four game losing streak is over. What are the odds the Eagles follow that with a four game win streak?

Jeff: Pretty decent. BC gets NC State (10-6) tomorrow and then head to Maryland (13-5). I'll be slightly optimistic and say the Eagles have a 75% chance of winning those two. Then Virginia Tech comes to town Saturday night which will be a tough game for sure and a coin flip at best. So I'll say 37.5% chance of winning the next three to give us a four game winning streak.


Jeff: Since this month has been all about streaks, odds men's ice hockey finally breaks theirs and gets a W?

Brian: I will go high here with a homer pick and say 89%!


Brian: It is not all bad news on the football front. BC received a verbal commitment from Kentucky running back Rolandan Finch. His nickname is apparently "Deuce" ... I'll assume he gets that nickname from weighing in at 198 lbs. Safe bet he'll be wearing #2 coming out of the backfield next year (with the departure of Brandon Robinson)? So what is the best nickname ever for a Boston College player?

Jeff: Personally I hated the "Matty Ice" nickname and the "Pistol Pete" nickname for my boy Paul Peterson. Best? I can't even come up with one good one.

Brian: I can't think of many good nicknames either ... how about "Ugly Dudley?"

Dudley: Let's see, there's "Ugly Dudley,"because my last name sort of rhymes with ugly. I hear that a lot when I'm at the free-throw line. And they don't like it when I talk to the refs. I'm telling the refs what to look out for, because I'm trying to gain an advantage anyway I can. So a lot of people call me "crybaby" and stuff like that. But I like playing on the road, and I like it when they say those things. Fans should get on you, they should make it hard for the opposing team.

Jeff: Since it is difficult to find success stories in BC athletics lately, we turn to the women's ice hockey who have won 5 of 6 heading in to a weekend series at Vermont. Can the girls sweep the potheads?

Brian: Ha. Potheads! Absolutely. Vermont is near the bottom of the HEA standings and BC is currently in first place (with the women's odd points system with shootout wins and shootout losses). Serious DAP to the Lady Eagles hockey team!


Brian: Last one, the Wiz of Odds takes a look at BCS conference bowl records over the last three years. The ACC went 11-13-2 in bowl games against the spread and 10-16 straight up. The only BCS conference with a worse winning percentage the last 3 seasons has been the Big Ten. Pretty sad, eh?

Jeff: No new news there. The Big East plays fairly weak opponents and has had West Virginia carry them with their recent bowl success. If you're a Big Ten official though, you have to be worried.